The attitude towards Marine Le Pen changed right after everyone found out about her defeat last Sunday. Many articles devoted to the election are full of condescension and disdain towards the lost candidate. Some even claim that she would never have become the president of France. Easy to give such confident comments after the defeat of Mrs. Le Pen, but I think it’s too early to say that the populist wave in Europe is over.

Le Pen has gained 33.9 % and The Guardian called that a “heavy defeat”. Of course, according to the polls, everyone expected 40 % but 34 % — is it really such a bad result for a politician who openly opposes the whole current European political system?

Marine Le Pen is the leader of a party whose ideology is based on nationalism and Euroscepticism. She is an open opponent of migration. She also receives funding from Russia (I actually don’t see a big problem in it, but more on that some other time) and the French voters probably know that. And such politician comes second in the presidential elections of the country.

In absolute terms, she got 22.3 % of votes of the number of registered voters. That means nearly a quarter of politically active French citizens support Marine Le Pen and her way. And most importantly — these people are not going anywhere.

With each new election, the popularity of the Le Pen family is growing. Before Marine, her father was taking part in the elections and whose best result was in 2002 — the second place in the second round. Back then it was indeed a “heavy defeat” — 82.2 % against 17.8 %.

This table best illustrates this situation: 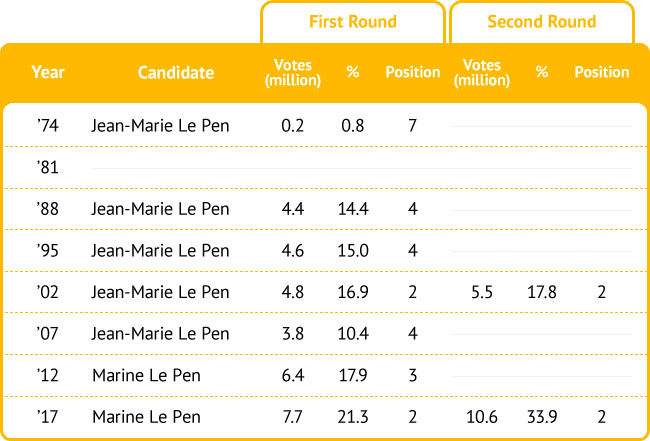 The numbers speak for themselves. Despite some deviations, the position of Le Pen gets stronger over the years.

If we take a look at the map of France, at the scale of departments almost all administrative units of this type voted for Emmanuel Macron. 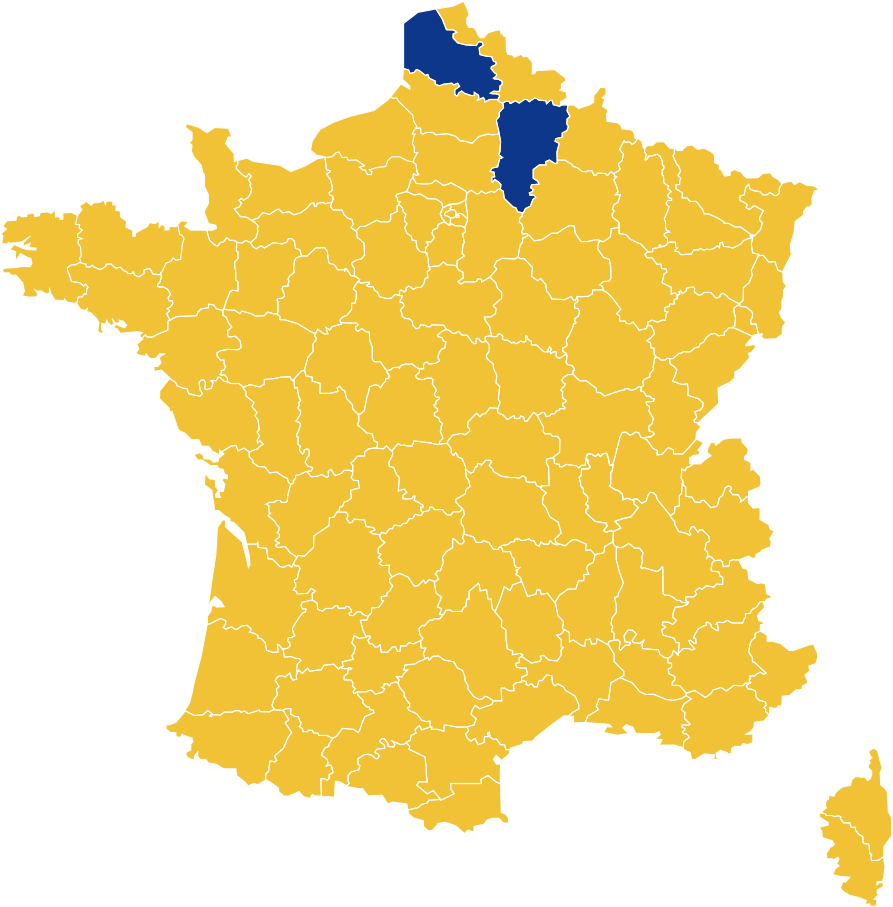 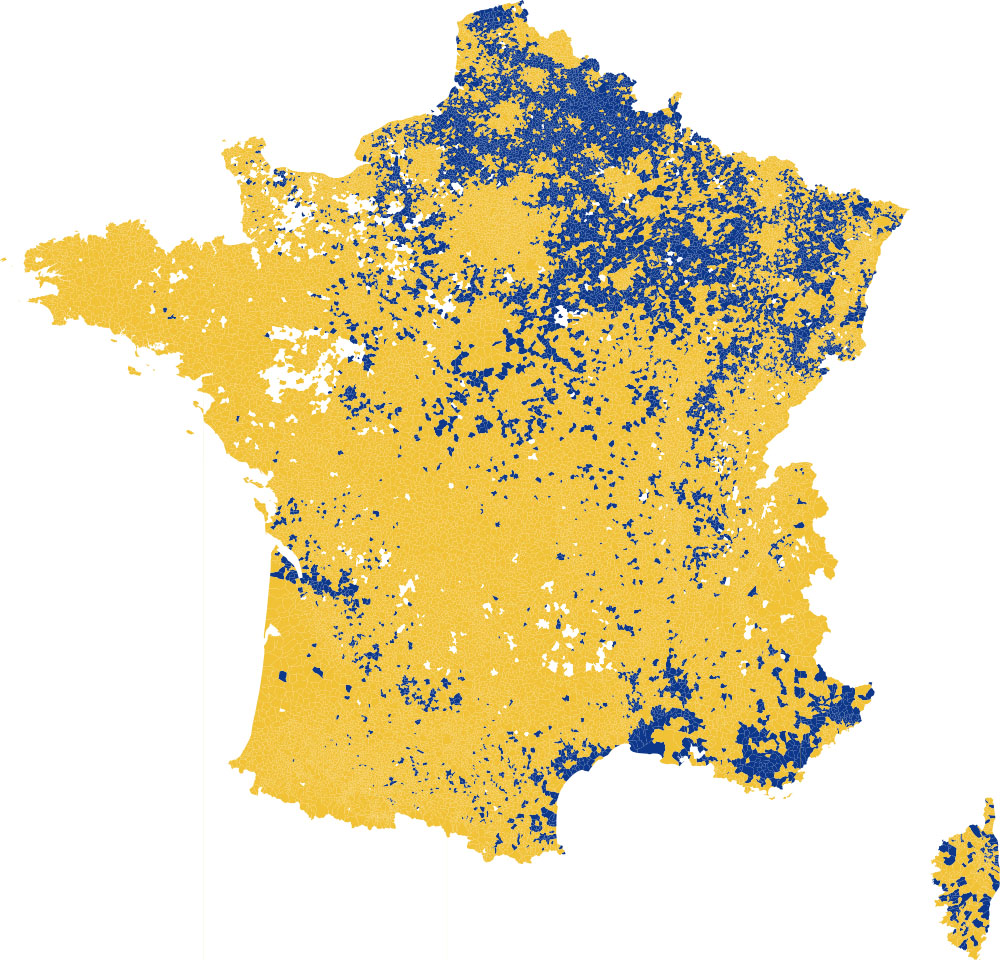 As we can see, this map is much more informative. A large part of the electorate of Marine is in the North-Eastern part of the country — close to Belgium and Germany. A large number of votes from the coastal areas are also evident.

I don’t know the internal peculiarities of these regions but I’ll give my explanation of this popularity. Border area with Belgium — Belgian attacks. Border area with Germany — a neighbor that invites Europeans to accept more refugees. The South of the country — Nice terrorist attack. In any case, these factors definitely play a significant part in the anti-immigration rhetoric of Le Pen.

Paris and the area around the capital are very good at resisting nationalism and “hate”. This can be explained by a very well developed civil consciousness — we all remember a variety of solidarity marches, hashtags of support and much more that doesn’t allow the Parisians to fall into nationalism. Plus the capital is much less homogeneous ethnically and is a financial center that would not welcome the country’s secession from the European Union.

Unfortunately, in other parts of the country, the situation is different. One terrorist attack in Nice definitely contributed to the electoral success of Le Pen.

Next year Mr. Putin will re-elect for another term and will rule the empire until 2024 (yes, one presidential term lasts six years in Russia). The next election will be held in France in 2022 and so all financial and media support, that was during this election (was there one or there wasn’t — that’s a different topic), will also be present in the next.

Marine Le Pen is only 48 so it is quite likely that she will not quit politics in the near future and that we can expect her participation in the next election.

During this election, 7.7 million people voted for her and 10.6 million in the second. Macron got 8.7 and 20.7 million respectively. In other words, Le Pen got 3 million additional votes in the second round while the result of Emmanuel Macron has grown at a staggering 12 million. This means that a lot of people voted for Macron just because they were “against Le Pen”, which means that Macron during his term has all the chances to lose his popularity which he got simply because many didn’t want to see their president as a “greater evil” in the face of Le Pen.

A large number abstained from voting (25.4 % of registered voters) and if we add the blank and null ballots that number will rise to 34 %. The voting preferences of this mass of people can go in any direction by the next election.

The UK & the USA Experience

As we can see, in order for an extraordinary candidate to win or a radical political solution to be implemented, only a small percentage advantage is needed.

Macron has won votes of millions of French for which he was not the number one candidate. A large number of people simply didn’t vote or have spoiled the ballots. It is obvious that sooner or later the French will forget about Le Pen and will begin to bite into each step and decision of the new president and, as I think, they will probably be disappointed — a lot of things are not dependent on decisions of the young president, but he will still be accountable for them. For example, it is likely that the Syrian conflict will not be resolved, as well as the Russian.

I am very much in doubt that the attacks in France are over and a new round of Syrian crisis may again aggravate the problem of refugees and migration.

What is left for Marine? Continue her work. Exploit every attack and every controversial case that includes migrants in France and at the neighbors. If the terrorists will switch from Paris to other cities in Central and Western parts of the country it will only benefit the nationalists. Even the attacks or the influx of refugees from its neighbors will influence the rating of Marine — her popularity in the border area with Belgium and Germany proves it.

Mr. Putin will not leave the throne and will continue to support Marine Le Pen. In five yours this support will become even better and sophisticated as experience is undoubtedly growing.

Also, let’s not forget about the UK leaving the EU. By the time of the election, the French can have either a bad or a good example that should be avoided or that should be emulated.

If the situation will develop in favor of Le Pen and she will play it wisely then she will only need to get a majority of votes in the second round and the advantage shouldn’t even be dramatic — a couple of percents higher than the other candidate with a rather languid turnout.

After all of the above 33.9 % don’t seem so funny to treat Le Pen with disregard. One should not underestimate the opponent and, fortunately, Emmanuel Macron understands this and has already said that the European Union should be reformed. Marine Le Pen is also not standing still and is going to reform her party.

In any case, it is important to understand that Marine Le Pen is not defeated and if in five years nothing will change in the country and in the region for the better, then she has all the chances to become the next president of the country. This position is shared by Nigel Farage, who believes that France will stagnate for another five years and then will choose Le Pen as a president in 2022.

The fact that a nationalist politician is popular in France indicates that Europe is in deep crisis. Let’s face it — Le Pen scored “impressive 33.4 %” and not “only 33.4 %”, she “nearly won” and did not “lose badly”.