Even today in some countries it is a common practice to control the minds and thoughts of their citizens by “protecting” them from other people’s opinions and ideas. This “protection” is a sign of paternalism — the government decides what a parson can say, listen and do.

If one official will conclude that the population should not know something, in that case the “servant of the people” will immediately ban it and will also introduce criminal penalties for violating the ban and will think that he did the right thing. As a result, this behavior brings up issue of the freedom of speech. What should it be in the XXI century and in the current 2016? Frankly speaking it should be absolute and uncompromised.

Freedom of speech can be based on two points. The first is the legislative support which guarantees that no person or organization can be held liable for any statements. The second applies to the society itself which encourages a peaceful dialogue and is open to discussions on various topics. If the society is conservative then people will simply be afraid to express opinions that are different from the conventional even if it allowed by the law. Unfortunately, countries often lack one or even both of these points and that does not bring any good.

What will happen if we forget about the freedom of speech and will avoid some issues with the help of the law or the public? Will it solve the problem? — Definitely not. If the country has not freedom of speech then it is not possible for the population to express and discuss a variety of opinions which are mostly opposed to the current course of the government or the society. It is worth mentioning that the current course should not necessarily be wrong.

For various reasons people become interested in different ideas, trends and ideologies. Any free government should welcome the pluralism that formed in the society, especially if it is confident that the current political course is correct. As an example we can take the XX century when there was a confrontation between the Western and the Eastern Bloc or in other words — the United States with the Soviet Union.

Since the formation of the USSR some Westerners sympathized with communism and the Soviet system. At first, the Western states looked with caution on this sympathy, but during the Cold War the bloc started spying on their citizens, monitored their telephones and looking for spies where there were none.

The paranoia of the government defense agencies, witch hunt, lack of the freedom of speech and other government imposed regulations, often go too far and forbid what actually should not be banned. Such talented people as: the US world chess champion Bobby Fischer, English mathematician Alan Turing and even Charlie Chaplin — all were suspected or accused of being sympathetic to communism.

Fischer and his family were spied on, suggesting that he is a Soviet spy. Turing was also considered unreliable also due to the Soviet spies paranoia. Chaplin was attributed to the “sympathetic to the communism” due to the “Orwell’s list” in which the English writer George Orwell mentioned people who he just thought were “fellow travelers” of communism. Due to the inadequate paranoia of Western countries these and many other outstanding people did not get the rights they deserve from their governments for absolutely no purpose.

In contrast to the speculation, there were people who really sympathized with communism: Le Corbusier, André Gide and Lee Harvey Oswald.

Swiss-born architect Le Corbusier, who visited Moscow at the end of the twenties, got a positive impression of the capital and the atmosphere that prevailed there. However, by 1932, just a couple years later, the Soviet Union has rejected Corbusier’s proposal of the Palace of the Soviets which put an end to his relations with the USSR, completely upsetting the talented architect.

The French writer André Gide declared himself as a “communist at heart”, but he later changed his mind after visiting the USSR, and writing a critical essay “Return from the USSR” in 1936.

Even the assassin of John F. Kennedy, Oswald (American) after moving to Minsk (Byelorussian SSR), wrote in 1961 in his diary: “I am stating to reconsider my desire about staying. The work is drab the money I get has nowhere to be spent. No nightclubs or bowling allys no places of recreation accept the trade union dances I have had enough.” And this is after just over a year of Soviet realities.

As can be seen from the examples, people quickly change their minds, one only need to allow them to ensure their wrongness. Often living in your country seems worse simply because you understand the current problems of your society, and in general — the grass is always greener on the other side.

People are constantly looking for answers to their questions throughout their lives and it is very unwise to forbid them to express their thoughts, ideas and opinions under the excuse of national security. Many who did not have any communist views were affected by this policy in the XX century. And those who did, either changed them and even became fighters against communism, or became silent by the fall of the communist regime.

Instead of legal prohibition or social disapproval, all topics should be welcome to the discussion. “Why do you think this idea is correct? What is good in it?” — Such questions should be freely asked and discussed openly.

This is what is being done in Germany —the problem of Nazism was openly brought up and “My Struggle” of Adolf Hitler was re-released. And Germans did not just re-release it, but also have added comments, footnotes, references and a lot of other material that opposes Hitler and shows his inconsistency. Only such measures — openly engaging in a discussion and winning it, we can close such hard issues as Nazism, racism, fascism and so on. 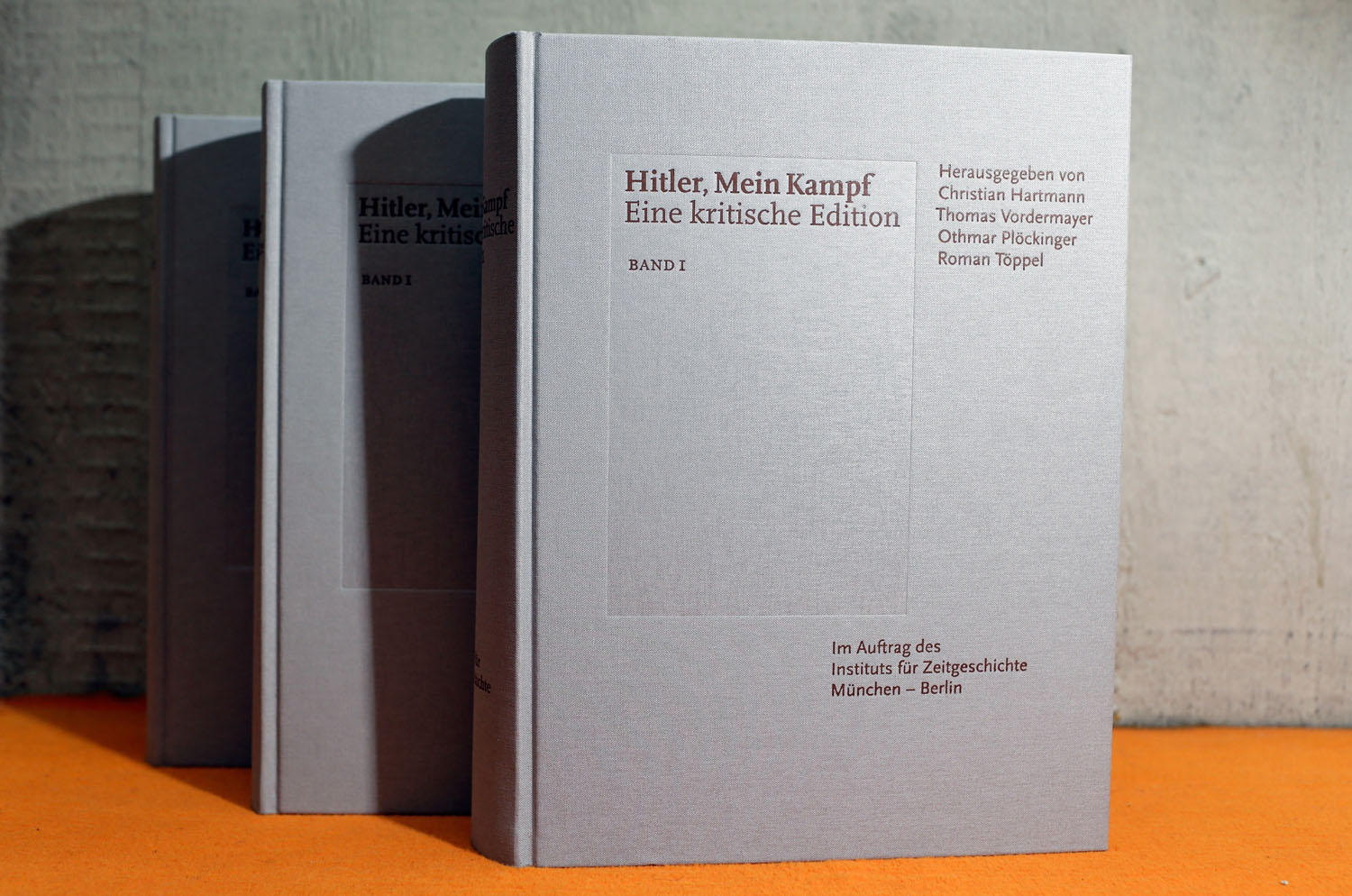 Not only does the freedom of speech help finding the truth and change opinion, but it also helps identifying those who publicly discredit themselves. An example of this could be a recently deleted post of Ramzan Kadyrov, the head of Chechnya, in which the Russian opposition political Mikhail Kasyanov is literally in gun sights. 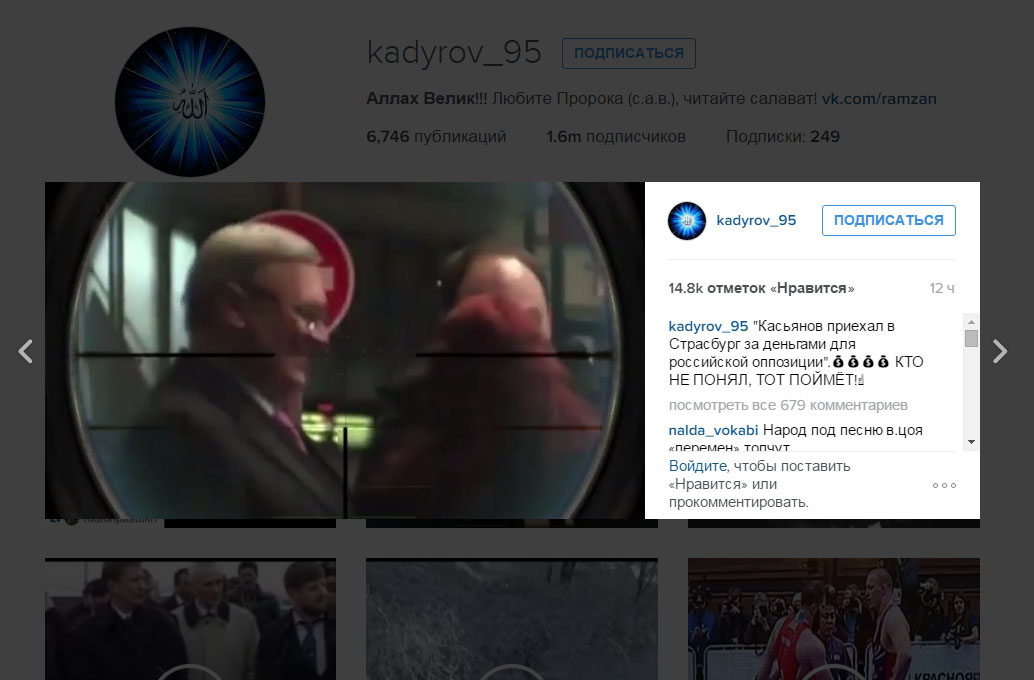 That deleted post: “Kasyanov has come to Strasbourg for money for the Russian opposition. Whoever didn’t understand will get it.”

Kadyrov himself says that he did not delete the post and that: “I always honestly and openly say and write my opinion, but should I say a few words about the dogs of the US as they immediately remove the Instagram post. The praised American freedom of speech! You can write anything you want, but do not touch America’s dogs, friends of the Department of State and Congress.”

Why is this done? Young and immature minds will suddenly follow such publications? In that case it should not be banned but rather explained why such actions are wrong and what specifically is wrong with them. And it is clear to any adequate person that threatening the lives of others, even with an opposite position, is absolutely unacceptable.

The fact that the post got about sixteen thousand likes does not mean that it should be removed under the pretext that it could serve as a signal for action for some individuals. It is like banning videogames assuming that they have influenced the teenager and not the person was initially dangerous to the society. If not a videogame than a book, movie, talk on the street or in the family, death of a relative — anything could be a catalyst. Same here — if after seeing a publication a person goes and acts, the problem is not the post but the individual.

Such posts show what the present-day Russia is, in which the head of a region shamelessly threatens another person’s life, while others call it a “metaphor”. An American company should not remove such publications when the sympathy for Russian politics sometimes appears lately in the developed countries. This and many other posts are just a swastika on the forehead of Charles Mansion, which allows one to immediately understand what kind of a person is in front of you.

Although the issue of the freedom of speech and political correctness is very complex for one article and we will continue this discussion in later parts, but it is safe to say that the government and the society should not ban anything. As Kadyrov himself notes: “whoever does not understand” his wrongness, he “will get it”. And those who do not get it, will have a beautiful swastika on their forehead, which will serve as a great sign to the society about the dangers of this individual and incompetence or radicalism of his ideas.