Wikipedia claims that the ‘“Church of Scientology in St. Petersburg” was liquidated by the courts’ decision’. If that’s true, where was I in December then?

On Nevsky prospect, the main street of St. Petersburg, we’ve run into promoters of Scientology who were handing out flyers. As soon as I got from the flyer that it’s about Scientology I started to ask my local friend about them.

According to him, Scientologists own this spot located at Nevsky prospect 51A for about eleven years. Both the promoter and his red jacket didn’t change since that time. Impressive!

Here we have even two of them, both in red: 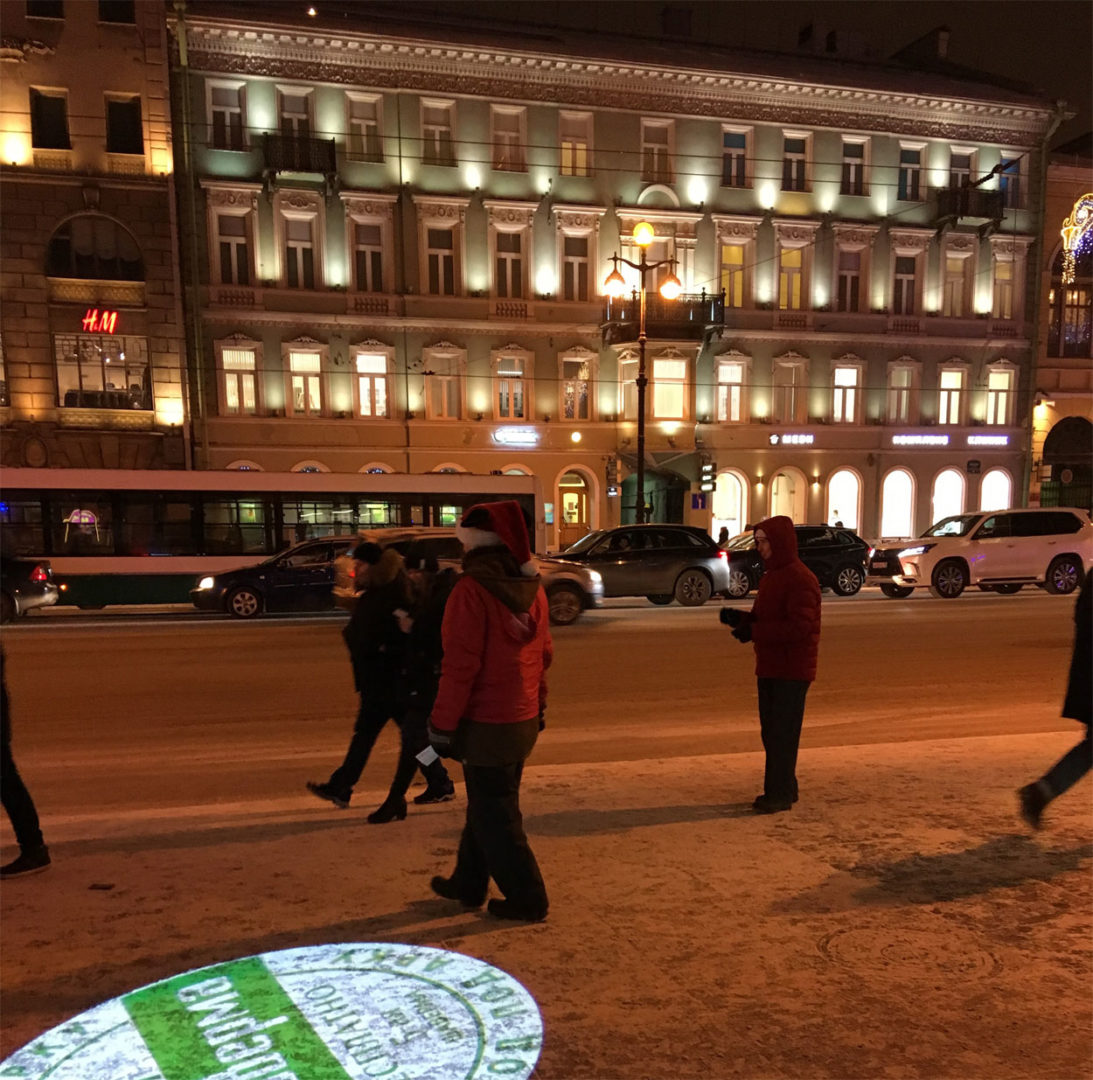 This is the already mentioned flyer: 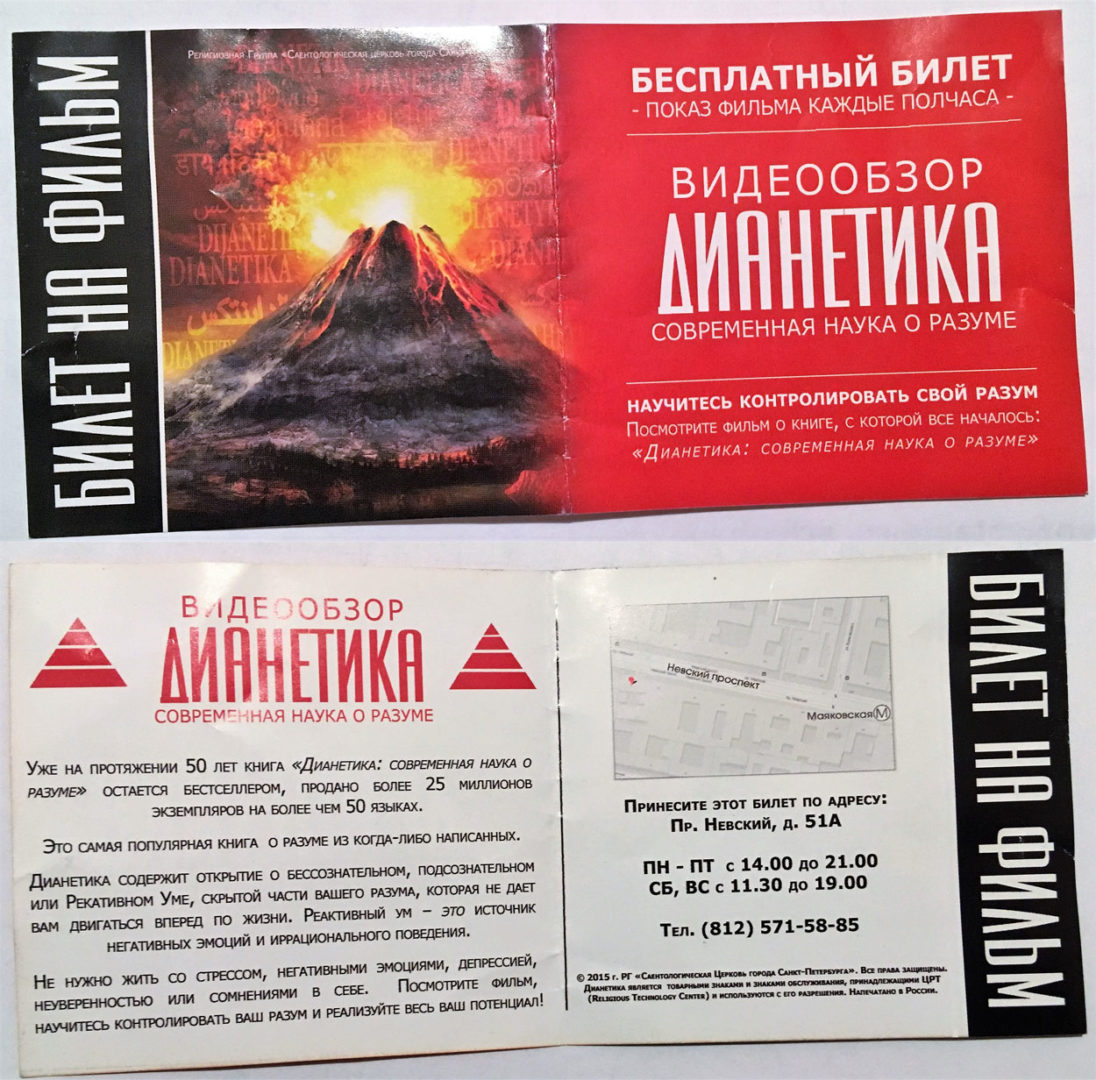 It’s claimed to be a ‘movie ticket’ for a movie called ‘Dianetics. Modern Science of Mind’.

Both my friend and I had some free time and so we ended up in a Scientology center called ‘Dianetics’. Apparently, that was how Scientologists avoided the courts’ decision.

A typical yard in St. Petersburg that leads to Scientologists: 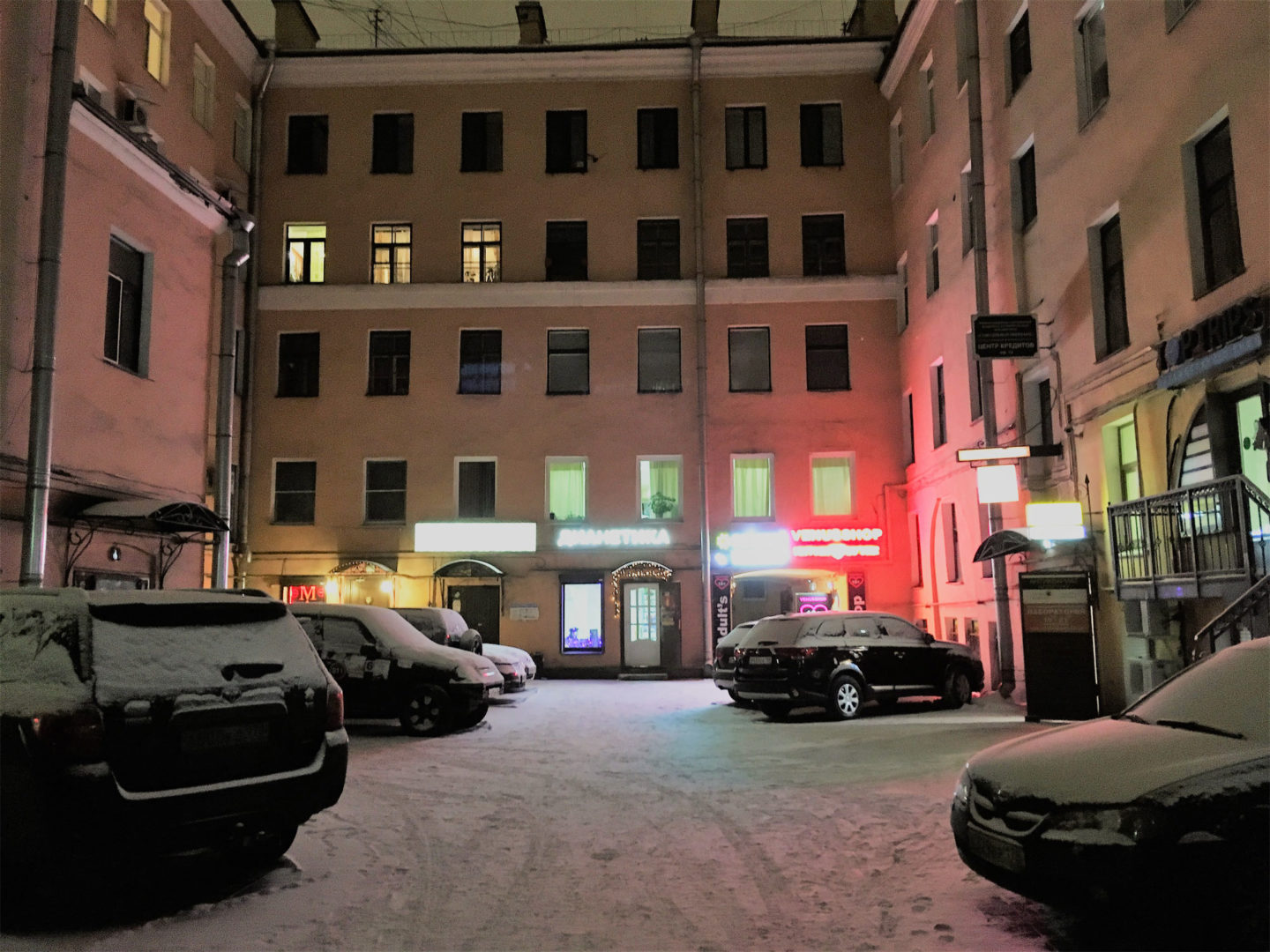 At Dianetics we were shown a film aimed at the American audience. No idea why, but Scientologists didn’t even bother to adapt that film to Russian realities: open airs were shown, veterans of Iraq (!) wars. Well, at least the dubbing was alright.

The main point of the film was to show how our lives are affected by the tragic events of the past. For example, do you feel sick just by looking at some food? In that case a long time ago (perhaps in the womb or even in your past life) you were poisoned by such food. Do you get panic attacks when you hear loud noises at a party? Then a long time ago you were at a war and lost a friend during such a noise.

After watching this ‘film’ (or more correctly a ‘short clip’) we went home, since Scientologists are open until eight in the evening and to pass the test you need more time than we had left.

A few days later we came back to the center. We were met by a girl who asked if we had time. When we said yes she gave us the Oxford Personality Assessment Test that has two hundred questions in it. Other flyers mention this test: 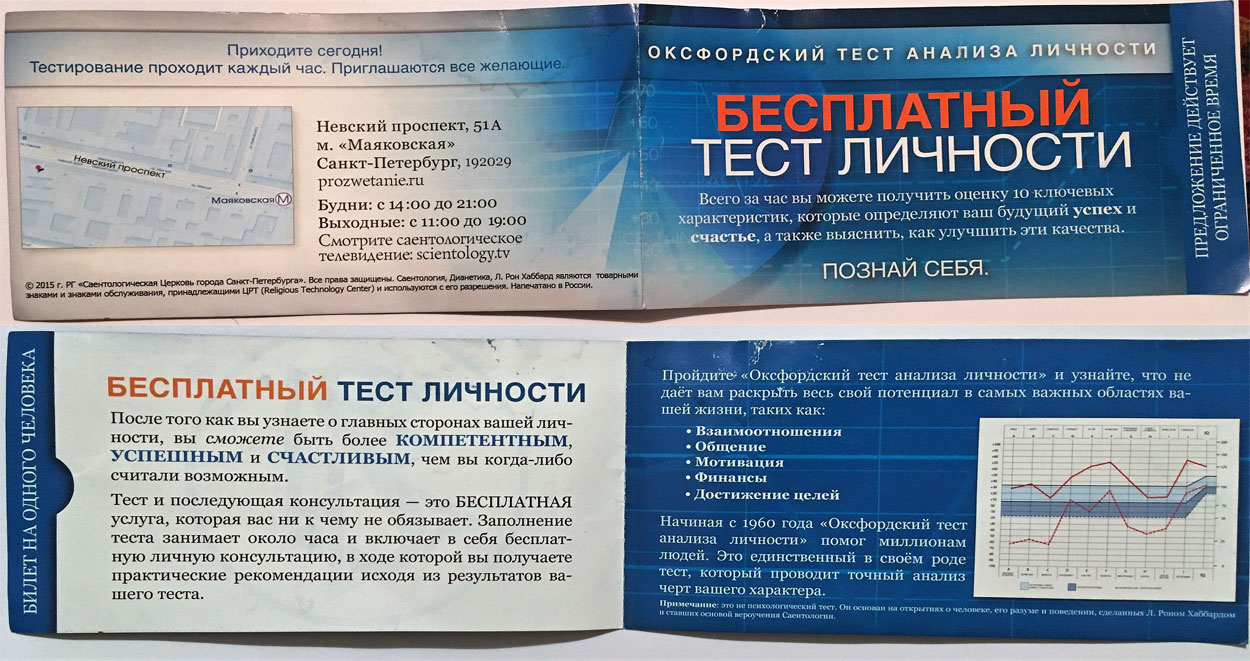 If you look up for that test online, the Russian web will show results related to Scientology and other stuff related to ‘personal growth’. In English, the only Oxford test that could be found on the first page is the one related to the knowledge of the language. Most likely the ‘Oxford Test’ has nothing to do with Oxford.

Despite it, we set down at the table which had a glass of water on it. The girl also offered all newly arrived tea or coffee. We decided to stay on the safe side and did not to drink anything at the center.

While we were filling out the test around five people have joined us. A young couple came by and the guy asked the Scientologists: ‘What can I buy here? Let me buy books, CDs, chairs, tables from you. What else can I buy?’

It all looked like a school lesson: everyone laughs at the teacher until she is starting to give grades. The same thing happened here. But despite this, everyone was sitting and filling out the test.

At first, it was interesting. Questions were similar to any psychological test on the internet. But as time went on my friend got tired and decided to leave. He started filling out the questionnaire with random answers. I was answering the questions honestly.

Then a girl came that has been here before. She sat in front of me and said ‘It’s not my first time here, run away!’ and then she chuckled a little. It turned out the promoters give her the test flyer too often. She had to be somewhere by they stopped her again. She said that she had five minutes and was promised that she’ll make it on time, but now she’s late. In spite of this, she continued to fill out the questionnaire while complaining that they are delaying her. In short, that was weird.

After analyzing the results we were all assigned to a personal Scientologist. Most of them were women in their late 30s.

The test result was somewhat believable, although I don’t get why ‘criticality’ and ‘lack of agreement’ are bad traits. In addition, I don’t agree (that’s unexpected!) with the result regarding (lack of) responsibility. 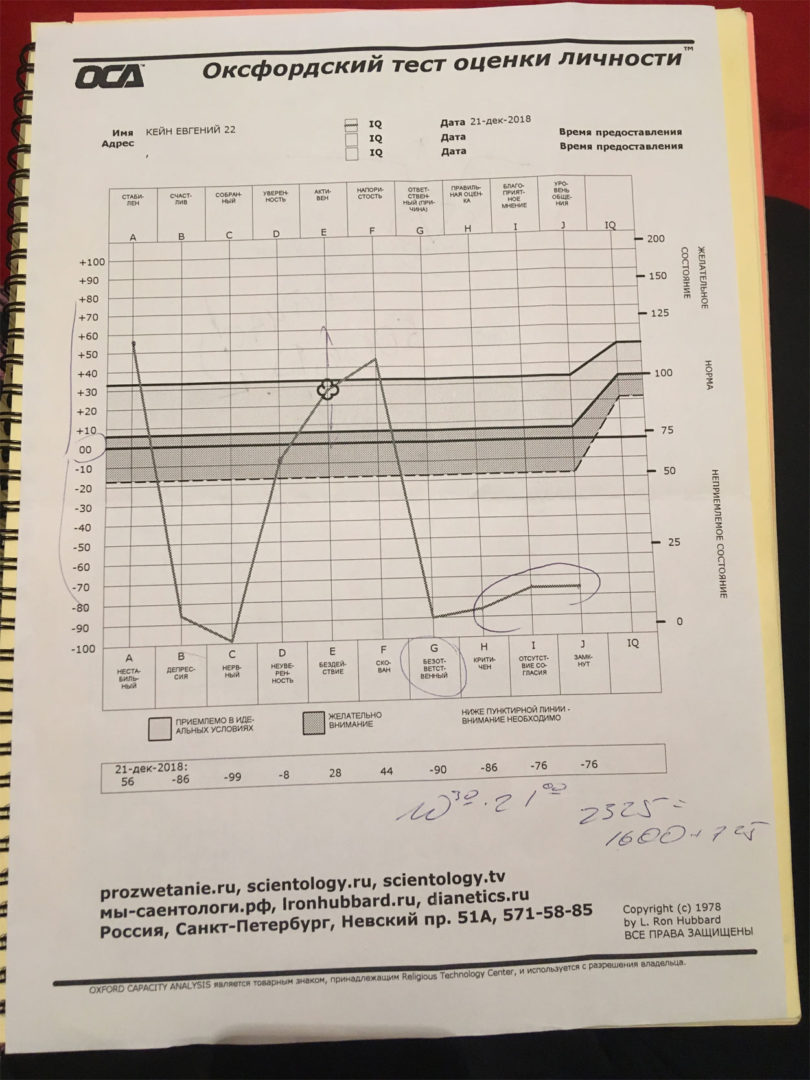 It’s interesting to note that most of the indicators are way below zero. The highest is ‘stability’ and even it has a moderate score of plus 55. Perhaps this is how Scientologists try to convince their visitors that their life is ‘bad’: a ‘respectable’ test and a graph create an impression that we’re dealing with ‘serious stuff’ here.

Around the same time, my friend’s interviewer tried to explain the technical details of Scientology to him. According to her, she solved problems that were caused by things that she’d learned while still in her mother’s womb. She also showed a great deal of knowledge of Dianetics by opening the book on the desired page with an essential quote.

We take a problem, for example, introversion. According to Scientology, if you are asocial now that’s because somebody betrayed you or took advantage of your openness some time ago. Therefore, all you have to do it is to remember that moment and neutralize it. That is, to understand that it should not affect your personality. So you can become open again.

When we agreed with the woman that there could be a possibility that some negative experience of interacting with people ‘made’ me more introvert and some bad relationships ‘make’ my life more difficult now, we then moved on to the next stage.

Last Stage: Give Us Your Money!

My hypnotist circled the ‘problem’ areas that have to be addressed and also wrote the time of the next seminar and the amount that I have to pay right now. 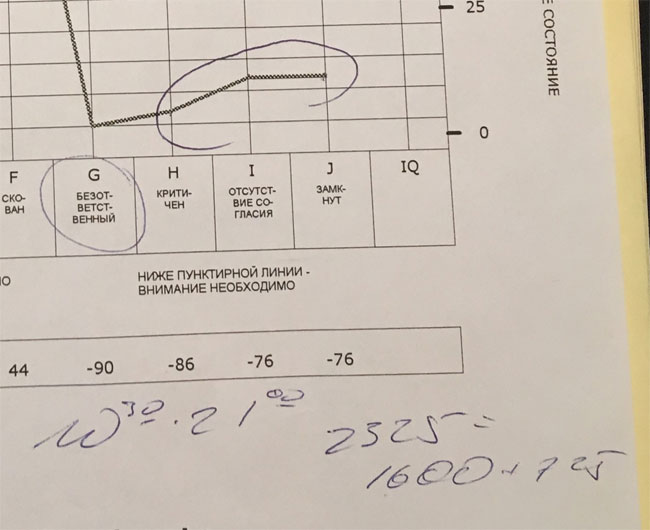 She started demanding money and the longer it lasted the more aggressive were the demands. I was promised a book called Dianetics, a ticket to the seminar and some other materials. It turned out that it costs exactly 2325 rubles (roughly 35 USD). Perhaps this sum sounds more plausible than just 2000 or 2500. But I said that I can’t spend so much without thinking.

All this time a man was constantly hurrying up all of the interviewees including mine. It made me nervous but perhaps they have a time limit that could be spent on a person and if that person cannot be convinced in e. g. 10 minutes, then he or she won’t be convinced at all.

Despite the ‘supervisor’ the woman continued to persuade me. She said that they have seminars almost every day but if I don’t buy a ticket now I’ll never buy one.

Her final shot was: ‘You know, I had a client like you. He pretended to be poor, said that he had no money, that he was unsure if it’ll help him. But then he bought the book and found the answer. And his situation was much worse than yours.’

She did not specify the situation, how did the book help him, who he was, she just made it very clear: if you don’t buy the book and won’t go to the seminar you won’t solve your problems.

Moral of the Story

While other religions are looking for your faith in the first place, Scientology offers ‘solutions’ to specific ‘problems’ for a specific price list. As I see it, this is what makes this ‘church’ dangerous.

Most likely, the more you pay them the more they demand in the future. The more tied you are to their religion the more fairy tales they tell you. Falling into emotional dependence a person can easily end up on the street after giving every last penny to the Scientologists.

After two visits I learned that the secret of Scientology is easy: any criticism is aggressively denied and any agreement is converted into money. A true success story.