A month ago a teen slapped a sculpture of a policeman in Belarus. Later he was forced to apologize for his behavior. More and more stories like this happen both in the East and in the West.

Who Was Offended and by Whom

Another incident from Belarus: a couple years ago CNN has added the main monument of the Brest Fortress to the list of the world’s ugliest monuments. This was considered offensive in Belarus. 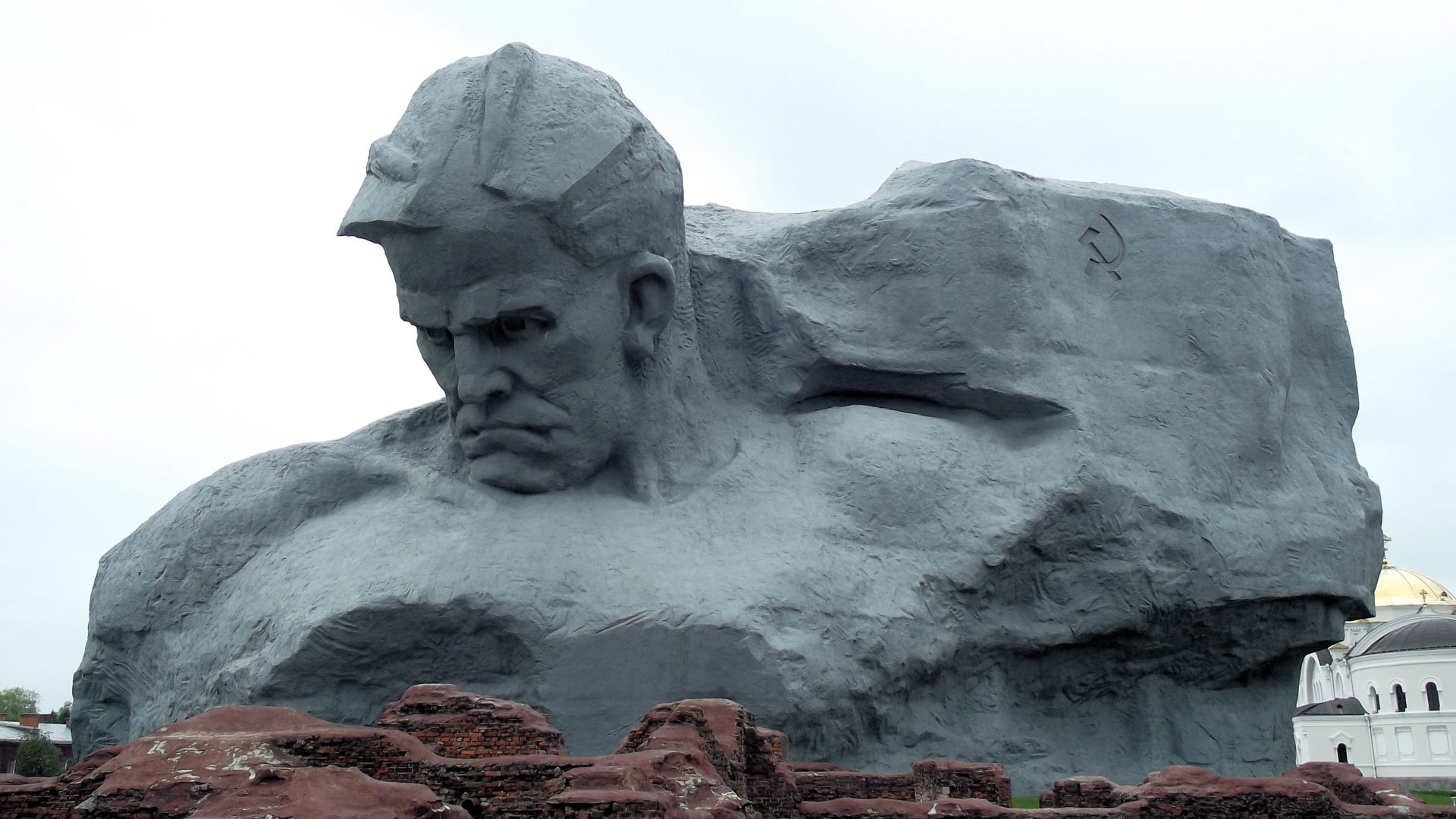 If we think of Russia or Ukraine various accidents involving the eternal flame come to mind. The flame can be found almost in every city and from time to time it is used as a barbeque spot or even a toilet. Children also like to extinguish it with snowballs.

Both Russia and Ukraine have many violent incidents involving monuments and plaques. From time to time you stumble upon a news article that includes somebody breaking or vandalizing a monument.

That was the East. Let’s now go to the West. A great example is the Holocaust Memorial in Berlin. Due to its design, some visitors see it as a public space and enjoy themselves at the memorial. Some consider that behavior as offensive. An artist even created a couple of collages on that topic. One of them:

The ‘Austerlitz’ documentary by Sergei Loznitsa also comes to mind. Loznitsa shows the behavior of visitors of the former German concentration camps that have become more like theme parks rather than places of grief. 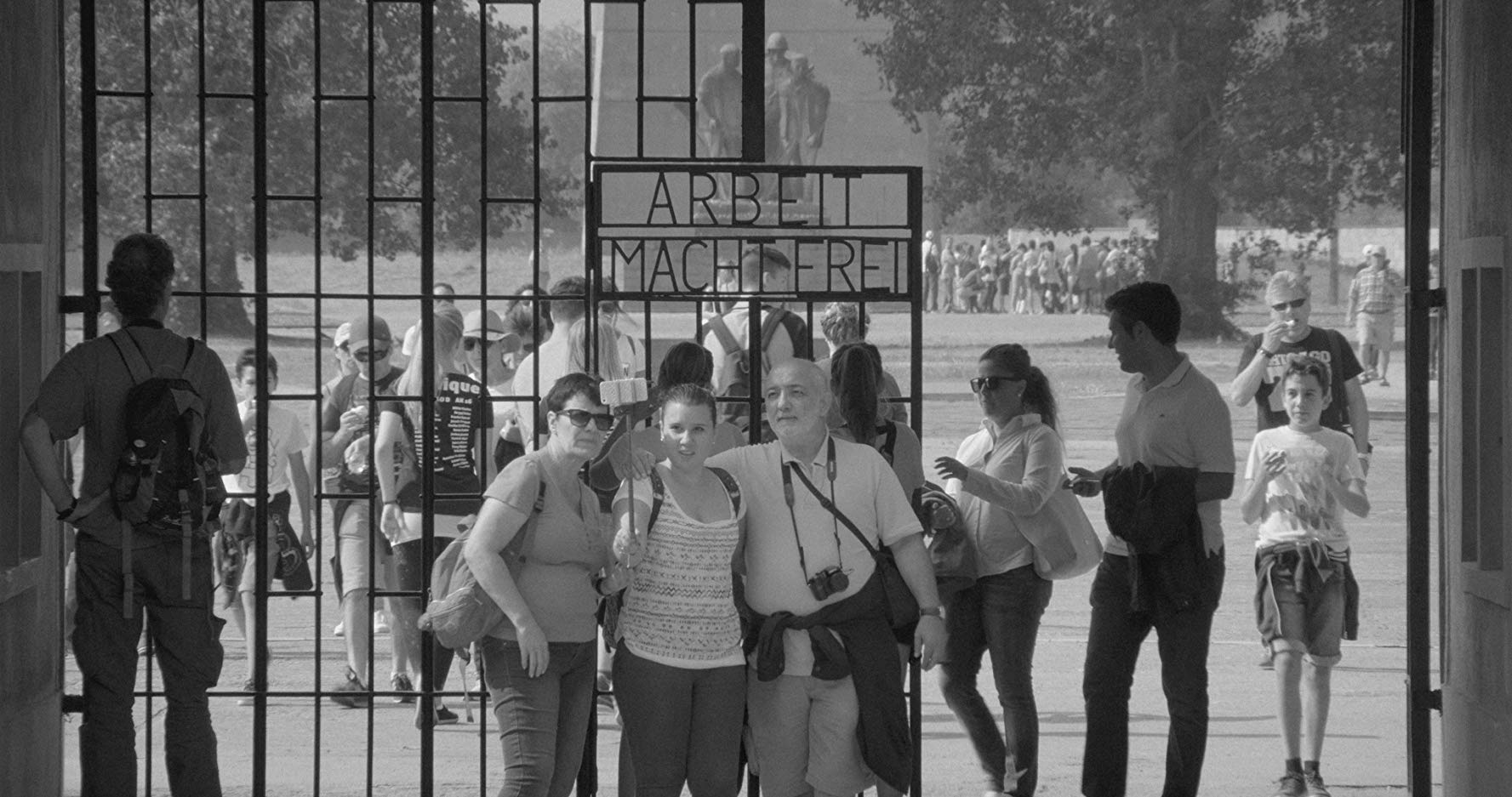 I’ve mentioned only a couple of examples but according to my observations around the second half of the 2010s, both people in the West and East became more nervous about monuments, sculptures, and memorials.

In the West, a witch-hunt can be started on the internet only for running on a concrete rectangle. In the East, the state can force a teen to say sorry to a sculpture. Is this OK? I’m not sure.

What Can Be Done in Real Life

I’ll say one obvious thing: people are free to do whatever they want with a monument, sculpture or a memorial if there’s no material damage. It’s OK to touch, kiss, hug, take a photo, lick or clean — everything is allowed. It’s also OK to hit a sculpture, though it’s not the best idea: a monument in Croatia broke the vandal’s leg when he tried to overturn the bust. 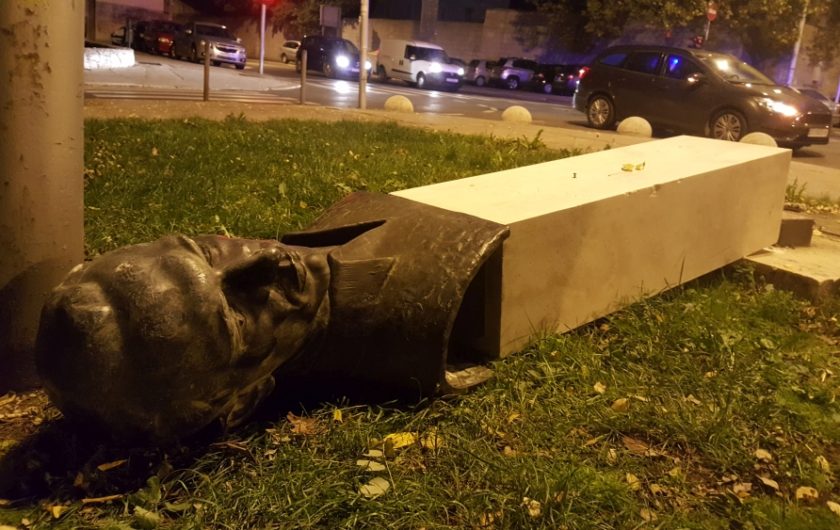 Can you have fun and be cheerful at monuments or memorials? The answer is yes! If it’s not a cemetery and there’re no graves nearby in that case I see no problem.

A memorial is made for those that live. The task of the living is to live. Have fun, be happy, love, and enjoy. It’s very human to be ignorant of history and we should not idealize humans of the past and of the present. We’re the same.

Is it appropriate to take happy selfies in a concentration camp? Not really. Is it necessary to start an internet witch-hunt for that? I don’t think so. This behavior only shows the ignorance of a specific person and that’s it.

If we see children, teens and tourists that run around and have fun at a memorial we need to think of these that designed that memorial. It’s the fault of these that created a space where people don’t feel its importance or the historical connotation.

In the end, if we think about it, what’s so bad about a memorial that is both a place for grief, joy, and fun? Humans have fought for generations for their rights and freedoms so that their children and ancestors could live carelessly in happiness and prosperity and not in eternal sorrow.

What Can Be Done Online

Everything that a person has built can be either beautiful or ugly. It’s absolutely normal. It’s also normal to discuss it. For instance, we enjoy old European cities and find Soviet mass housing ugly. We even gossip about looks of others, though it’s not that easy to physically change our bodies. Keeping this mind, we can safely state that the physical appearance of monuments can and should be discussed.

Here we have, for example, a monument to ‘Motherland’ in Naberezhnye Chelny, Russia. Take a closer look: 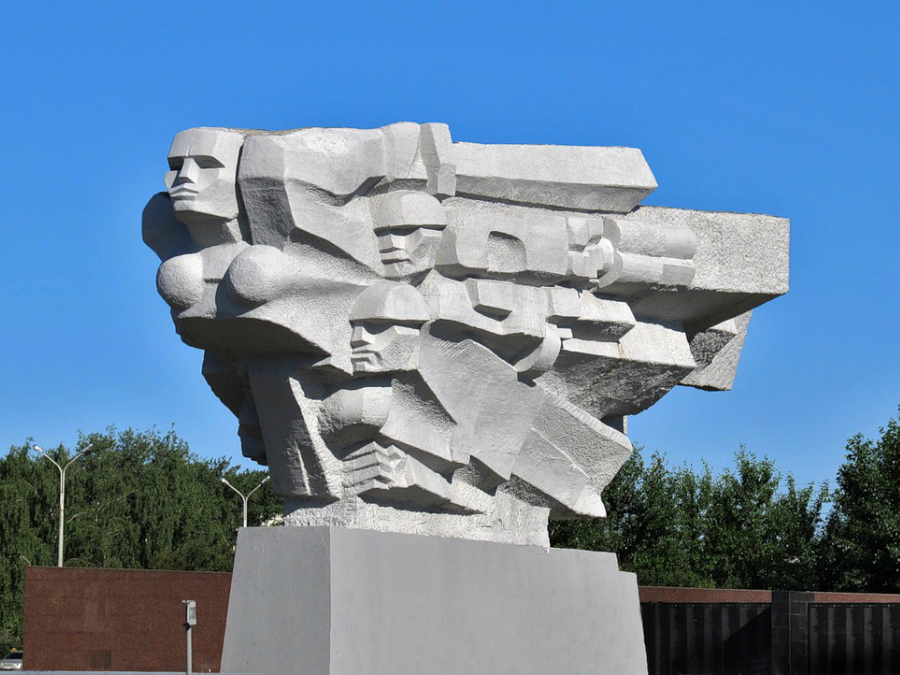 Do you consider this as a beautiful monument? Do you associate it with motherhood? Homeland? Does your mother look like that?

Our magazine can get in trouble in Russia for answering these questions (I’m serious about that), that’s why I’ll leave you to your answers. But I’ll add this: in case I made a poor drawing of you, you are free to ask me: ‘Who is this freak and why is he so poorly drawn?’ It won’t be an insult to you. After all, what does your face has to do with some guy’s poor drawing technique?

Same goes for sculptures and memorials. If it’s OK to discuss an artist’s skills then it’s OK to discuss the project of the memorial. Regardless of the event or the person to whom the monument is erected, its execution can be terrible.

For example, a monument in the metro or any other inappropriate location will simply be left unnoticed. When it comes to the composition of the project, then, for example, what’s the symbolism of the eternal flame? In Russia, it’s the memory of the Second World War. But for a local, it’s just a fire that cannot be interacted with. 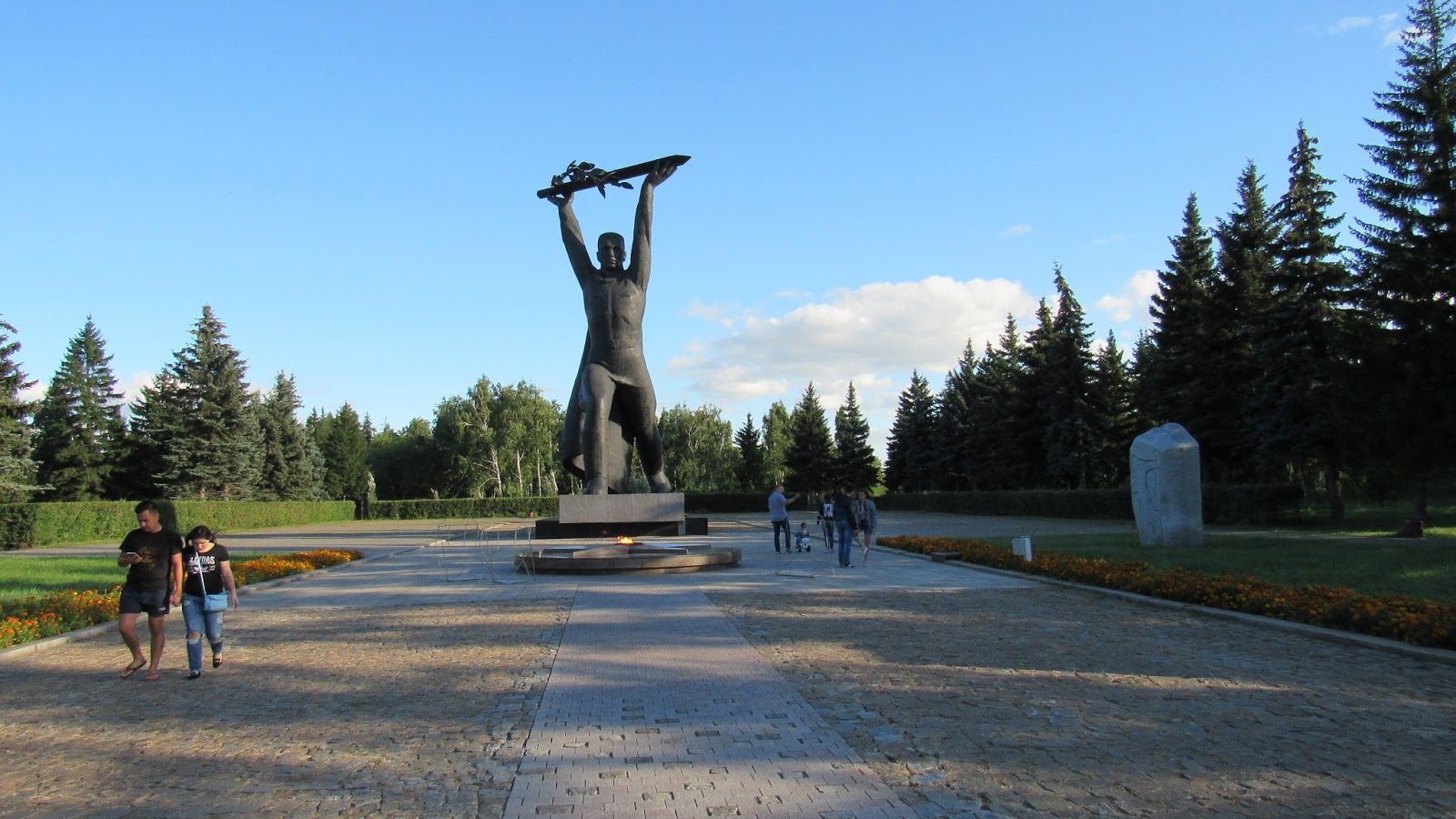 It’s a huge empty space with a fire in the center. Once a year politicians put on a sad face and visit the eternal flame. There they put a wreath near the flame while the press documents this event. 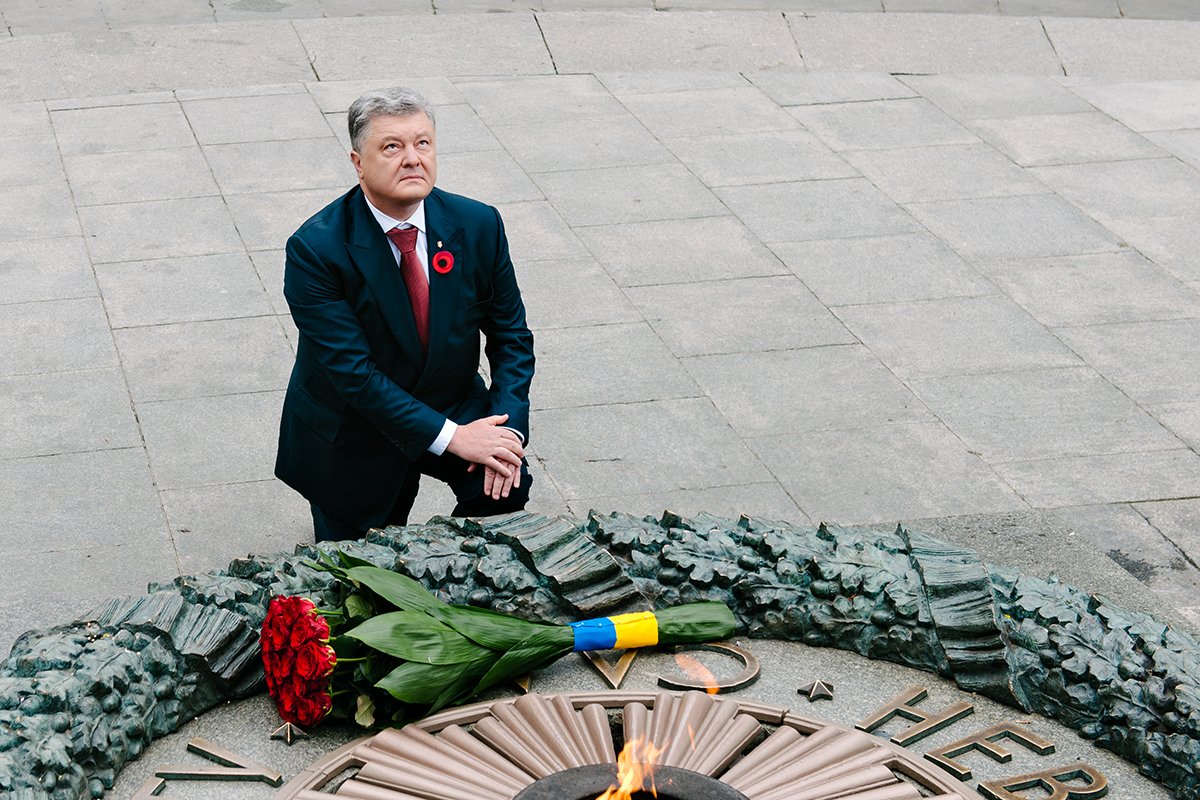 It’s not my opinion. As I already mentioned, there’re lots of stories on the web that include that eternal flame and locals that do crazy things with it. And passers-by don’t even notice that the fire is not burning.

It’s just an empty space for politicians or, in other words — it’s a poorly designed space. It’s too inert and passive to invite the visitor into a ‘dialogue’. Only a tourist will take a photo. Locals are used to such architectural forms and they are simply left unnoticed.

Moving on, memes and caricatures bring no material harm either. A photoshopped image of the ‘Motherland’ stature in Volgograd comes to mind. It was created by the team of Alexei Navalny, a Russian opposition politician.

The Russian society reacted inadequately to the caricature. One opinion from Twitter:

‘Navalny supporters in Volgograd desecrated the monument of the “Motherland”. I hope they’ll be found. And put in jail. There’re things that cannot be forgiven.’

And even when it became known that it’s just a photoshopped image and not a real photo, Volgograd residents started collecting a petition against this ‘blasphemy’. Of course, the Russian government did add some hysteria to this incident, but the Russian society did respond inadequately.

No Material Damage = No Problem

It’s weird to say it but I’ll tell it once again: if there’s no material damage then there’s nothing to discuss. One can interact with a monument or a memorial whatever he or she wants unless it creates material damage. When it comes to nonphysical actions like discussion, admiration or disapproval, memes or caricatures — such things are allowed by default.

If we’re dealing with physical damage then it should be treated by the law and without unnecessary emotions. I’d like to remind that monuments or memorials are not cemeteries. Inappropriate behavior on graves is not the best idea but it rarely happens.

How come we are offended by ‘inappropriate behavior’ with pieces of stone and we are ready to expose real people to a witch-hunt? I don’t know.

The First World War did teach humanity nothing. Same people that took part in it started the Second. I doubt that monuments will prevent us from starting a new war or conflict. More likely it will be freedom, openness and the overall prosperity of the population.

We need to be more open towards other opinions and behavior. Appreciate both our and someone else’s freedom, not the desire to push your opinion and position at any cost. Even at the cost of someone else’s freedom. We need to believe less in the ‘sacredness’ or some ephemeral things. Especially in the ‘sacredness’ of stone and metal. It’s this position of ‘sanctity’ of some symbols and the sacralization of the state that brought our continent to bloodshed.