In the previous article we segmented European flags and tried to create a map based on the flag type. Today we will continue our research in Africa.

Africa is the second largest and is also the second most populous continent in the world. Based on the main hypothesis of the human origins this is the continent where our history has begun. Therefore, in a way each of us was born in Africa.

Much distinguishes this continent from others: the endemic flora and fauna, climate, culture and history. Despite the colonial past, fifty-four independent states have formed in Africa to the present time. 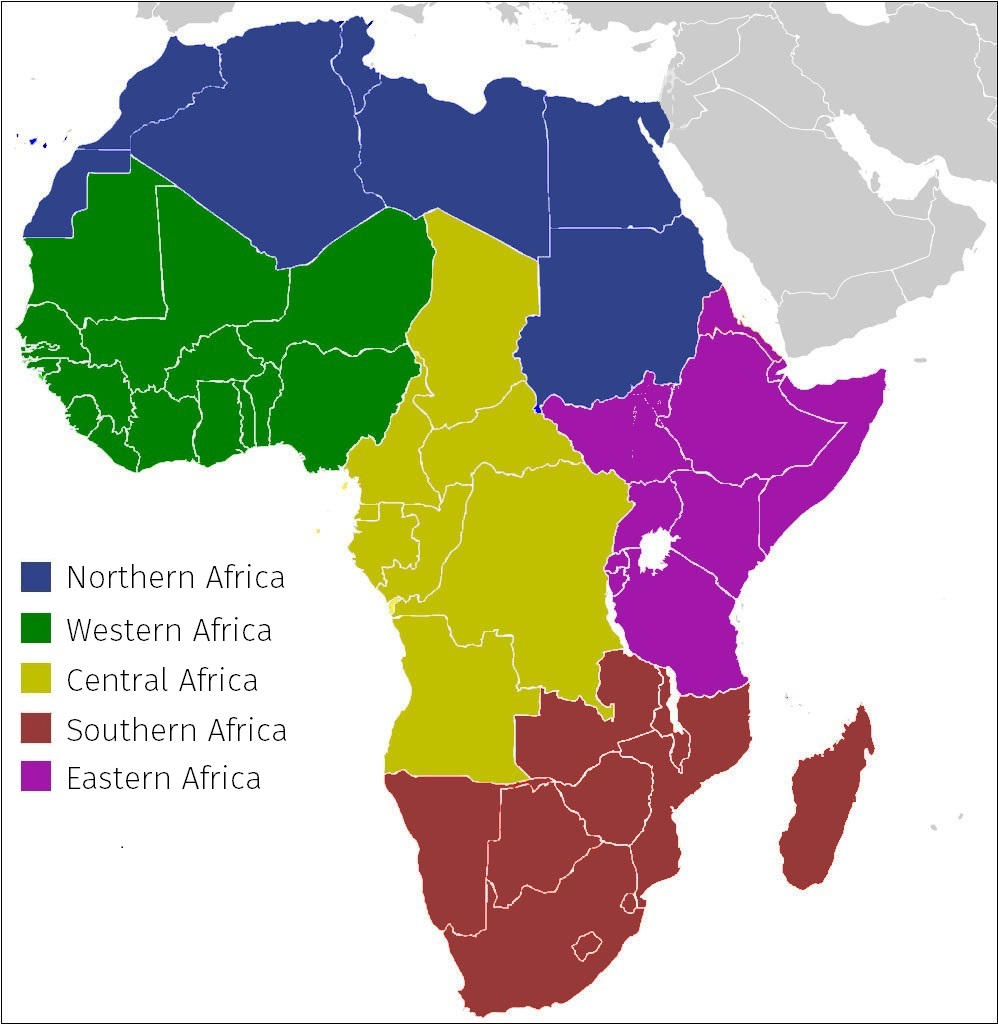 African flags are different from other flags of the various parts of the world mainly by: pan-African color palette, the presence of stars and an overall large variety. Tricolors are popular among African flags but there are also many other types which we will now discuss. As in the first part, we will make a flag map at the end of the article.

There are just three bicolors in Africa: Algeria (vertical), Angola and Burikna Faso (horizontal), and therefore we will put them in one group. The symbols on the flags and also colors of this group symbolize: religion, the African continent and blood that was shed during colonization.

Same as in the previous group, there are only three flags of this type in Africa: Guinea-Bissau, Benin and Madagascar. These flags stand out by the distinctive colors of the continent which have often been used in the monarchs’ banners and by different nations. The horizontal stripe at the flagpole has the same meaning in the symbolism of the flag as the other colors, but the peculiar location of the stripes enables formation of another group.

In contrast to bicolors, tricolors are more widespread. Seven states use horizontal tricolors. Two of them have a star in the center of the flag: Senegal and Cameroon. The star is quite popular in the African flags. In this case it symbolizes the sky and the spiritual aspirations of the people as well as its unity.

Same as in Europe this is the largest group. The flag of Kenya has a Maasai shield and spears — symbol of protection. The pentagram on the Ethiopian flag is the symbol of peoples’ unity. Niger’s flag stands out from this group with a square shaped flag and its colors.

Probably the very human concept of flags aesthetics was often associated with three colors. Of course, referring to African flags it is important to say that they are younger than the European flags as they were created only after the liberation from the colonial expansion. Most African countries have tried to change the colors and the look of the old flag which was associated with the bloody past.

For example, Ghana has become one of the fist countries that used the Pan-African colors in their flag as it was one of the first countries to gain independence. Further, many other African countries have picked up this trend in the creation of their own flags. 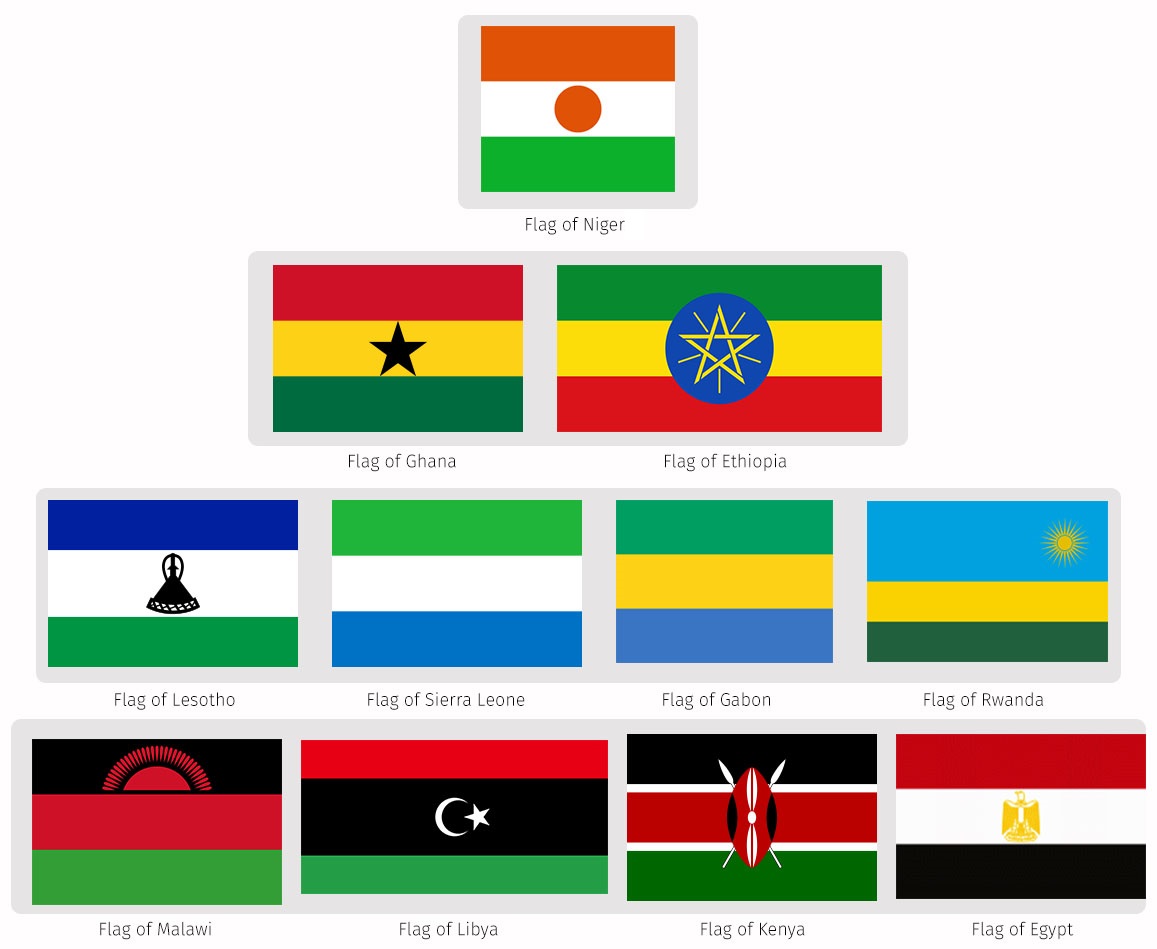 The group with the dividing triangle near the flagpole is also quite numerous and diverse. Many of these flags have three horizontal stripes, some four, two or even seven. But because there are many flags of this type in Africa and because they can be assigned to different groups due to their colors (the Pan-Arab, Pan-African and other) let’s combine them into one group.

Triangles in this group symbolize Islam in the Pan-Arabic countries in the North Africa, and freedom, fight for the liberation and history in the Central and South Africa. 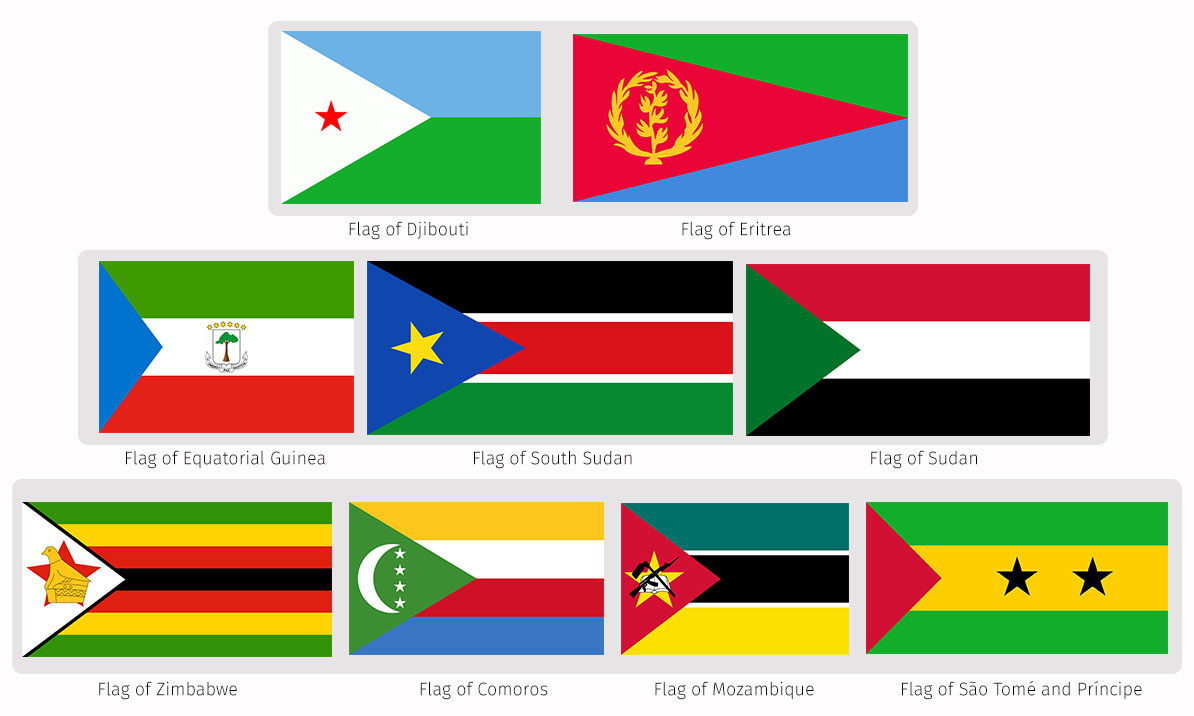 Flags with the dividing triangle

Let’s put in this group tricolors which have a horizontally dividing stripe — Gambia, as well as one-color flags with a white edged stripe — island nation of Cape Verde and Botswana. The ten stars on the Cape Verde flag symbolize the ten islands of the country. Botswana’s flag represents the sky and hope for the rain, while the stripes — mutual understanding between the black and white races. The flag of Swaziland depicts an African shield, spear and staff, and the colors are symbols of peace and stability. Gambia’s flag reflects the traditional for Africa the sky, the sun and the earth.

Flags with a horizontally dividing stripe

This group also has only four flags: the Democratic Republic of the Congo (DRC), Congo, Namibia and Tanzania. The four countries can also be characterized by Pan-African colors, symbolizing the black indigenous people, the bloodshed during the struggle for freedom of African land and water.

Flags with a diagonally dividing stripe

There are just a couple of flags in the world that have more than three colors and therefore are multicolored, if we do not take into account the color of the coat of arms on some flags. The colors of the flags are traditionally Pan-African and keep the general African symbolism.

Monochrome With a Star

Flags of this group belong to the Pan-Arab countries with Islam as the dominant religion of the state. This is immediately evident in the symbolism of the flags. Only the star on the Somalia’s flag is not related to Islam and symbolizes the regions of the Somali people live in.

Stripes With a Square

Only two flags can be put in this group: Togo and Liberia. Togo’s flag uses the traditional Pan-African colors; the star symbolizes unity as in many other flags. Stripes on the Liberian flag represent the eleven signatures on the Declaration of Independence. Also, this flag is used by about 1700 of the world’s merchant fleet as it is cheaper to use than others. However, despite this, the fee for the use of the flag is still a significant proportion of the Liberian treasury income.

Flags that use stripes with a square

This group will include the flags of Zambia, South Africa and Burundi. The colors of the Zambian flag symbolize the traditional for Africa struggle for freedom, indigenous population and natural resources. The African Fish Eagle represents the elevation of the Zambian people over public issues. Burundi flag reflects their national motto: “Unity. Work. Progress.” The flag of South Africa is the most multicolored flag in the world. It also has much symbolism in it but in general it represents the multiracial future of the country.

Now it is time to take a look at the map that was created based on the specifications of the country’s flag. 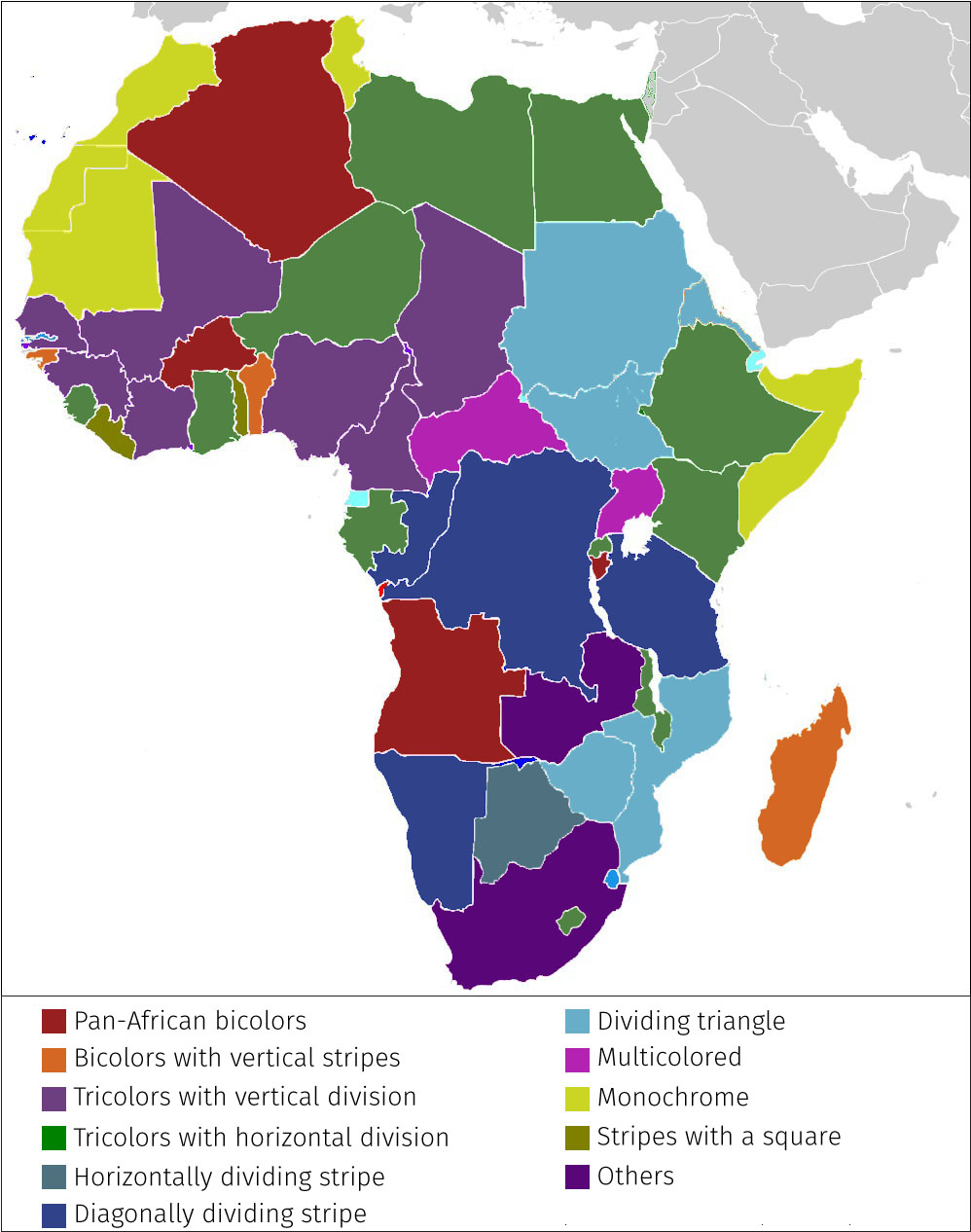 It is possible to draw some conclusions. Most North African flags use Islamic symbols and are executed in monochrome colors, in the tricolor form or in the form of a tricolor with a dividing triangle at the flagpole.

Flags with a separating diagonal stripe for some reason are common in the central and the southern part of the continent. Vertical tricolors are used exclusively by the West African countries and the most widespread flags are horizontal tricolors, as in Europe. This is because there were many French colonies among these countries. Despite this, many countries in Africa are using nonstandard types of flags: multicolor, with a dividing stripe, bicolors with a vertical stripe at the flagpole and so on.

There are also specific features regarding the colors. Thus, the flags of the North Africa mainly use the set of Pan-Arab colors (red, white, green and black). In the flags of the island states and in the countries of Southern Africa in addition to the Pan-African colors (red, yellow and green), navy and blue are used, symbolizing the sky or water.

In general the color set in the African flags does not deviate from the Pan-African orientation. That, in a sense, unites the flags of African countries. The symbolism of these colors is also similar: green predominantly represents the natural wealth, yellow represents prosperity or unity and red the courage and the bloodshed for the liberation and independence. Nevertheless, the world of African flags is peculiar and amazing. It has a certain specificity and stands out from the rest of the worlds’ flags.