Since the day of the referendum, Britain has almost three years to negotiate the conditions under which it will depart from the EU. UK-EU relations partially resemble the disintegration of the Soviet Union. Let’s see what Brexit Britain could learn from the USSR.

Not only did the Soviet Union break up in the previous century but so did the communist-controlled Eastern Bloc. Many countries stopped being colonies of the Soviet Union and even more finally became independent from the USSR.

Some of these countries found pride in their independence while others were lost or felt betrayed by the authorities. There were so many scenarios during the breakup that we’ll easily find a one that fits Brexit Britain. This is especially valuable since the breakdown happened a couple decades ago and had affected half of the European nations. So, historically and culturally speaking this is the closest example Britain can get.

It wasn’t hard for the developed world to find flaws in the way former socialist countries reformed themselves. Even today you can stumble upon an article that patronizingly implies that the shock therapy was ‘wrong’ and that reforms should’ve been conducted on a slower pace. Then it leads to ‘populism in Eastern Europe is on the rise’ and ‘we wouldn’t have to deal with today’s Russia if everything was done right in the 90s’.

Well, finally we have both the UK and the EU that can show us how to deal with such situations. Oh, wait! Turns out even Britain and the EU can’t negotiate a deal on time and without stressing the lives of its citizens. The deadline approaches and it doesn’t seem that the situation is stabilizing or getting more predictable. And today is so much different from what Eastern Europe had in the 90s.

Countries in the Socialist Bloc were subject to two, three or four transition stages that had to be implemented on an extremely tight schedule. 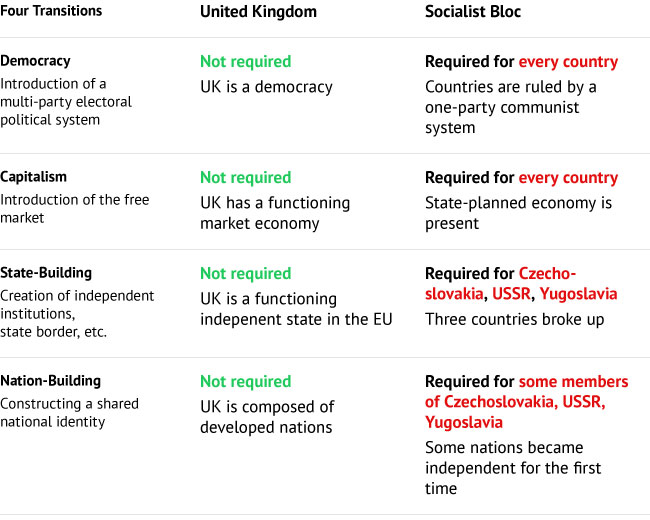 As we see, the UK is not in such a bad situation. It only has to negotiate a deal with the EU that will regulate the relationship between the two entities after the UK departs from the union. There’re some tensions regarding the border between Ireland and Northern Ireland, but other than that there are no significant issues that could backfire.

Having said that let’s go to the two facts that Britain and Britons should keep in mind if they want to have a prosperous future.

Radical & Fast Reforms Are the Best

The former Socialist Bloc can be divided into three groups depending on the attitude towards reforms. There were nations that backed reforms and saw the immediate decline in living conditions as a temporary price that has to be paid. Other countries were either less enthusiastic about the reforms or were even against them.

Some of them: Estonia, Latvia, Lithuania, Poland, Czechia. EU-members that delayed the reforms were Bulgaria and Romania and today they are the poorest members of the union, but they are still better off than other countries.

Russia was going back and forth with the reforms and that pushed its population into poverty during the 90s. In addition, criminal activity flourished and that created today’s mafia state. However, significant economic reforms were implemented by the liberal government and that allowed Russia to thrive for most of the 00s.

Countries like Belarus were against any reforms and today they are one of the least developed states in Europe. In Belarus, for example, the government only recently has somewhat stabilized the local currency. Before that every now and then high inflation made the population constantly poorer.

Keeping this in mind this is what the UK should do: if it plans any reforms after leaving the EU they should be bold and should be implemented fast. Keeping the country, the neighbors, the business and the world in limbo is not the best idea.

Extending the negotiations period, as some British politicians propose, would not be a good option if we take into account the number of transitions the UK should undertake (zero) and the poor long-term performance of the independent states that decided to walk the ‘slow’ path of gradual reforms.

The first fact is part of the second. Countries that had a clear national consensus on their future (or at least their past) pushed for reforms. They elected new political parties and expected them to follow the reforms. These countries performed better and are more or less the ones already mentioned.

Those nations that were split or were even more fragmented couldn’t agree on the direction that their countries should follow. They performed worse and the majority of them don’t have a fair and democratic political system, struggle from high levels of corruption, poverty and low levels of civil liberties.

Its misery won’t end with Britain leaving the EU. There is no nationwide consensus on this topic and that means that Brexit will always be discussed over and over again until the population will decide what exactly they want their country to be.

A consensus could be reached by going for a ‘softer’ Norway-style Brexit, as the referendum clearly showed that even though 51.89 % want more ‘control’ of their country, the other 48.11 % part is enjoying their stay in the EU. So, a compromise could be distancing from the EU, but not for too much.

But I’ll suggest that the British society is deeply divided on some major issues and Brexit is only the tip of the iceberg.

If Britain wants to overcome this crisis it should have a nationwide discussion on the issues that the population is concerned with. Only by finding out these issues, addressing and overcoming them can Britain have a secure and prosperous future. At this moment it looks like Britain is trapped in Brexit for a decade if not more. Again: leaving the EU is not the end, but the beginning.