I’ve no idea why English is the only language that uses ‘Belarus’ while the majority of other European languages (wrongly) use the outdated ‘Byelorussia’. What’s more — only Belarus and Moldova are still being called their Soviet names after the fall of the Soviet Union.

Let’s go back to the 90s. The USSR has collapsed and fifteen countries were born. Since then some of the countries changed their names as well as some cities.

Some of the most important changes:

If we check Wikipedia we see, that most of the new names are well established. Wiki is the best way to check it since it’s a valuable source of information for everyone and it has a lot of influence on how a country’s or a city’s name is written on the internet.

This is what we see: 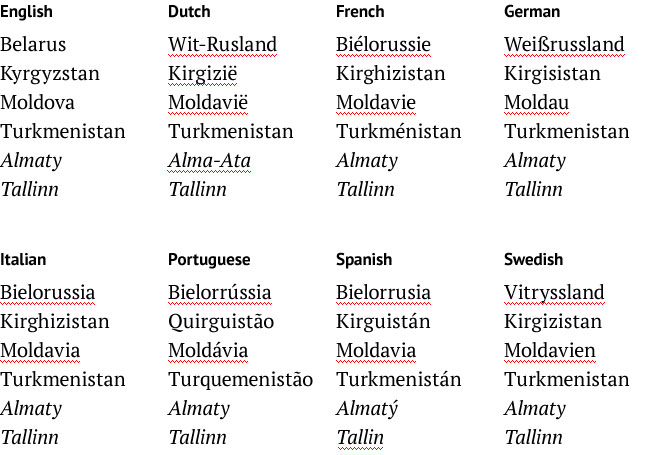 Out of this small sample, we get Dutch as the most conservative language. This is unexpected, but moving on we see that both ‘Belarus’ and ‘Moldova’ are not catching up with other major European languages that were not in the Socialist block. Why is it so?

I’ll stick with Belarus since I don’t know much about Moldova. One could argue that Belarus is an authoritarian dictatorship and that is the reason why European languages are reluctant to update themselves. But Kazakhstan changed the name of its city to Almaty and every language except the Dutch use it. Same goes for Turkmenistan. Both countries have elements of authoritarianism and dictatorship and don’t differ much from Belarus politically speaking.

Maybe it’s the geographic proximity — Belarus and Moldova are in Europe and every European language would be more reluctant to go for a new name. But Estonia is also in Europe and it easily added a second ‘n’ to its capital (well, except for Spanish).

Perhaps it’s poverty and unimportance to the rest of Europe. Could be, but why bother about Kyrgyzstan? Every language except for the Dutch did update the name of that country.

I have to conclude that I’ve got no idea why the situation is as it is. It would be logical if every country would stick to the Soviet name or to the new name in every case, but for some reason, some changes are ‘passed’ and others are not. If you have an idea why it is that please share it in the comments.

English Is the King

I have no idea why languages like Swedish didn’t change their spelling of Belarus — ‘Vitryssland’ is so much different than ‘Belarus’. But I am confident about one thing — English is still the king. It’s a very inclusive and diplomatic language — it included every change that the countries demanded. Doesn’t matter whether it was the diplomatic pressure, international regulation or any other reason. What matters is that English is a very progressive and inclusive language that is open to changes.

Speaking and using English you are not forced into using the archaic and even offensive names for your native country and these details matter.

That also tells us that English is less about ‘this is wrong’ or ‘this isn’t proper English’ but more about ‘don’t worry, we’ll call you by your preferred name.’ This is important, as forcing your vision of somebody’s name is not a good idea.

As long as English keeps up to its values and, as Willem de Kooning once said, does constantly ‘change to stay the same’, I have no problem with it being the major language on the planet.