South America is one of the two American continents, located mostly in the southern hemisphere of our planet.

There are many hypotheses about the settlement of the continent by people, but the most interest South America gained during the voyage of Christopher Columbus in 1492. It was followed by an expedition of Amerigo Vespucci, an Italian, who realized that Columbus did not discover new Asian islands but a new continent. Afterwards, numerous European expeditions followed for precious stones, silver and gold. The technical superiority of Europeans affected the result of the conflict in the area which led to the destruction of many South American states: Inca, Aztec and Maya.

Following the geographic determinism, it becomes clear that culture, science and the worldview of these nations was very different from the culture and science of other continents. Thus, the destruction of entire states has caused irreparable damage to the global culture of the planet but, nevertheless, the southern continent did not remain vacant.

Into what has the South American culture become over the centuries? How has the inhabitant of this continent change and what happened with his worldview? Let’s answer these questions with the help of vexillology. 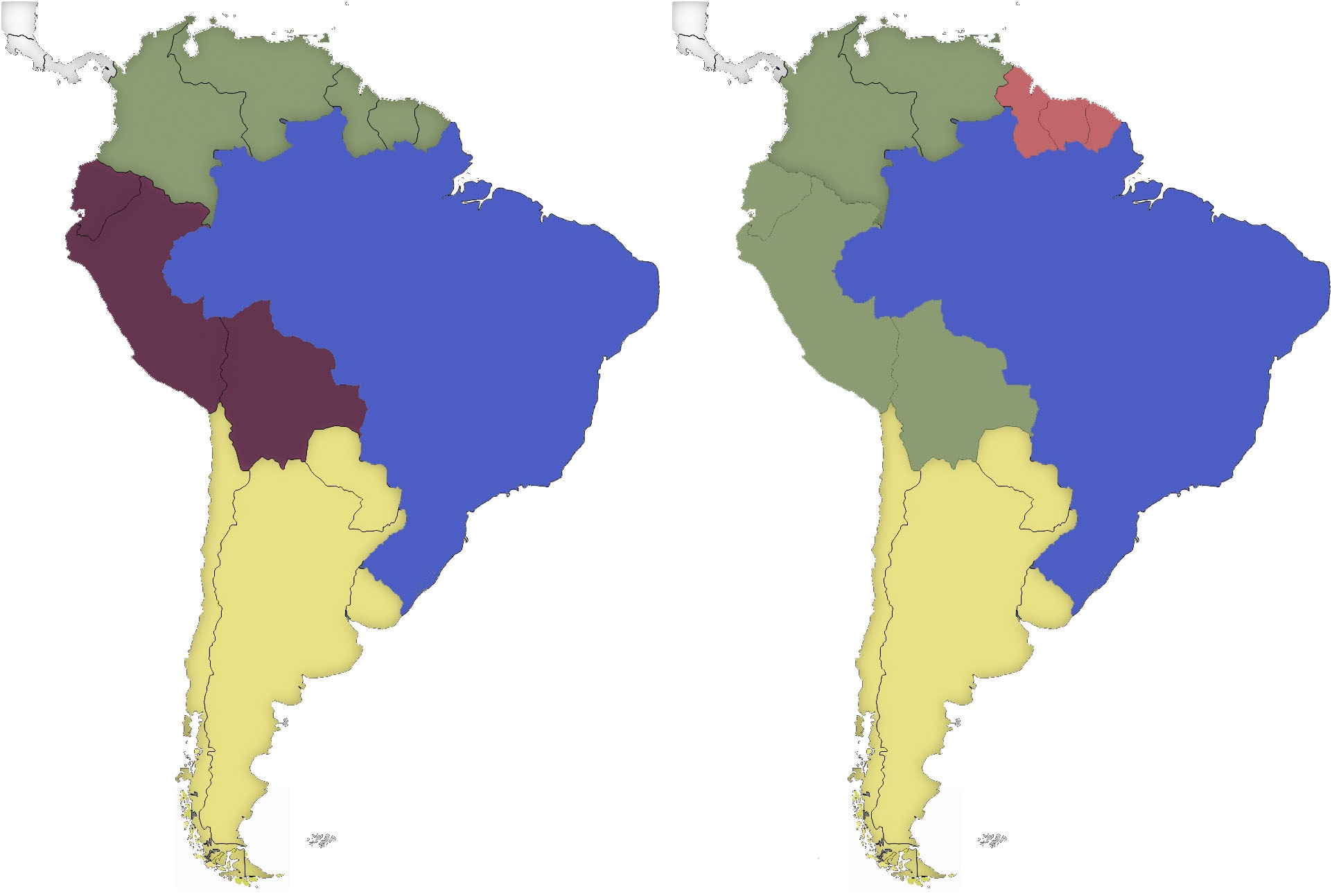 Note: the flag of French Guiana is not included in today’s classification as it is a dependent territory.

There are only two flags in this group: Uruguay and Chile. Flag of Uruguay is similar to the flag of Argentina as Uruguay for some time was under the influence of Argentina, however, after the independence a new flag was adopted. Four blue and five white stripes symbolize the nine regions of Uruguay.

Chile’s canton symbolizes success and fame, white — snow of the Chilean mountains and red, as in many other countries, symbolizes the blood shed in the struggle for independence.

Few people know, but in the period from 1810 to 1826 various Spanish colonies in America fought for independence and the improvement of living conditions of the population. As a result, states like Chile, Peru, Bolivia and many others that exist today have formed.

Tricolors are widespread in the world, but in South America three colored flags are primarily associated with the liberation movement of the nations.

Flag of Venezuela, Colombia and Ecuador are very similar in colors, this can be explained by the influence of the formerly existed state Gran Colombia, on the territory of which the abovementioned countries were situated and which over time fragmented into three separate states in 1831. Stars on the Venezuelan flag symbolize the seven historical provinces (or eight, as the modern flag includes the disputed territory with Guyana). Interestingly, the eighth star was added in 2006 at the initiative of the then President of Venezuela Hugo Chavez. It is also worth noting that the stripes on the Venezuelan flag have been equalized due to a global trend. The colors of the flag symbolize gold and jewels (yellow), sky and sea (blue) and liberators blood (red).

Flag of Argentina is a classic tricolor which uses two colors. The yellow “May Sun” symbolizes the Incan god of Sun. In the primary version the flag is full with sky symbols, what is pretty obvious. But there are also other interpretations: the blue stripes — the meanders of the La Plata river, white — silver and jewels or that blue and white are the colors of the Virgin Mary robes.

Flag of Paraguay is the only flag in the world which has different emblems on the obverse and reverse of it. Paraguayan flag originated from the classic French tricolor, which in turn is a symbol of liberation. The interpretation of the colors of the Bolivian flag does not deviate from the general trends: the blood of the liberators (red), gold and wealth (yellow) and development and progress (green). 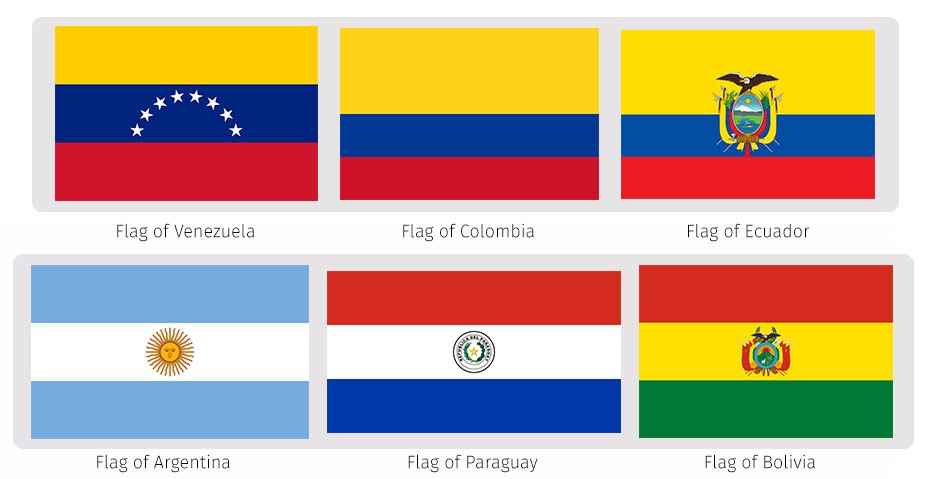 Various flags that do not have any similar teammates were placed in this group. Peruvian flag is a classic vertical tricolor. The state version is presented below and the civil has no emblem on the white stripe. According to the legend, General José de San Martín arrived in Peru in 1820 and saw a lot of flamingos. The General took it as a good sign and he decided that the red and white colors must be the colors of the Peruvian Legion, which he created to free Peru.

Flag of Brazil represents the national colors of the country — green and yellow, originating from the Brazil emperor dynastic colors. The green symbolizes spring, yellow gold. There are also twenty seven white stars on the flag which are grouped into nine constellations. A fun fact — the constellations in their form on the flag is not possible to see from the Earth, but such an arrangement can be seen if one flies beyond the celestial sphere at 8:30 in the morning (12 hours in sidereal time). I would like to mention that the Brazilian flag is one of the most recognizable and colorful flags of the world. Also, one of the constellations on the flag is the Southern Cross, so beloved by the Oceania states.

The symbolism of the Suriname flag is as follows: green is a symbol of fertility, while means freedom and red — progress. The gold star is a symbol of a happy future.

Guyana flag is surprising in its structure as well as in unconventional symbolism. The interpretation of colors is the following: red triangle — perseverance, black border — resistance to external challenges, golden color — wealth, white border — rivers, the shape of the golden triangle symbolizes an arrow and the green background — nature. Also, the Republic of Guyana is notorious for one of the highest suicide rate in the world, largely due to the activity of sects.

South American flags stand out with their peculiar symbolism related for the most part to the struggle for independence. So, to date, an ethnically mixed society in South American countries tries to come to a stable and a high quality of life. A continent that gave birth to many talented athletes, a region that has the largest and the most discharge river in the world — the Amazon, impenetrable forests and an amazing wildlife that left an incredible architectural and cultural heritage and is ready to present their own, special flags, which are the reflections of the ontological path and history of the population of the whole country. 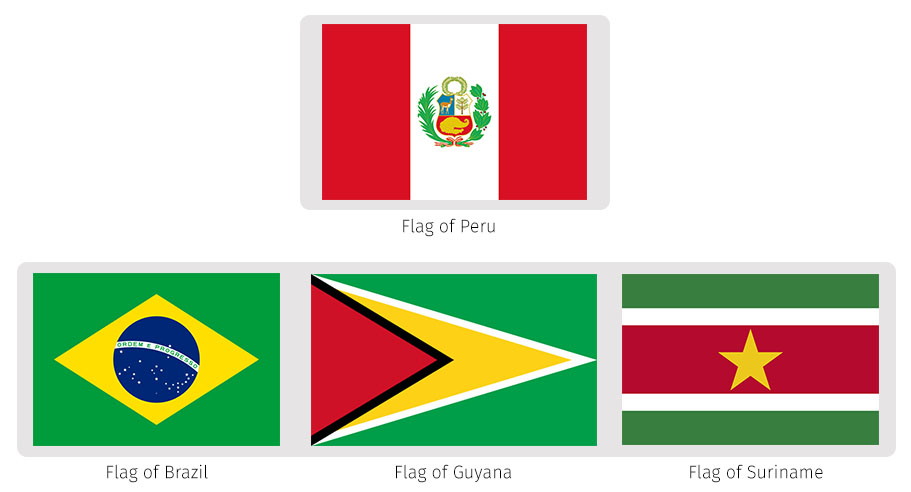 As can be seen on the map, flags of this region differ in a sustainable zoning in flag types segmentation. So, horizontal tricolors are common to the North and South of the continent, flags with cantons are used by Chile and Uruguay which are located on the far West and far East of the continent respectively, unconventional flags are used in the center of South America from the West to the East. 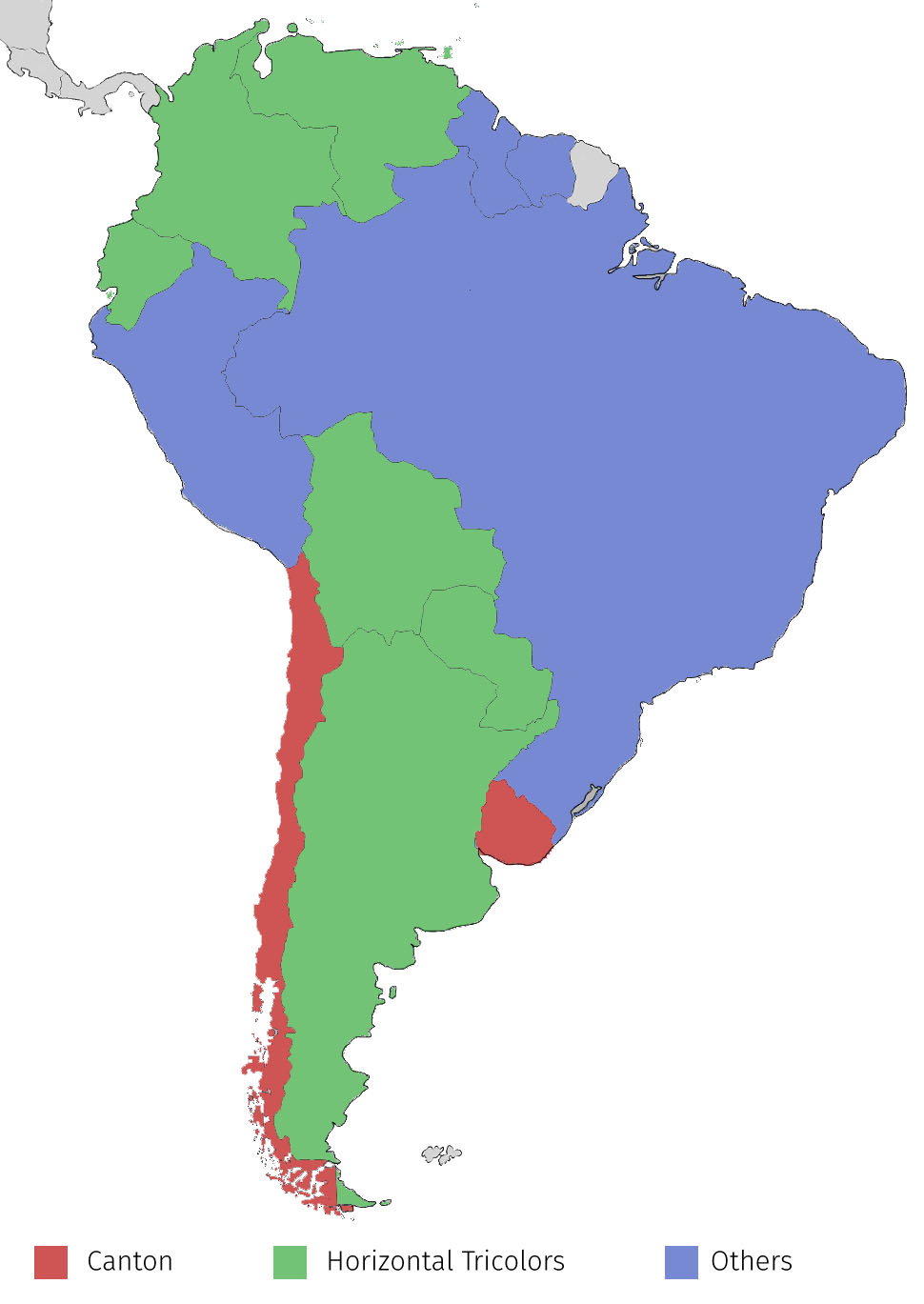 I hope this material arouse some interest to this region, its history and culture. Often, South America is lost in the background of its Northern neighbor, although this is completely undeserved.