With the development of the mass media, elections in each country have become a universal event, especially if we are talking about a large country which affects the economy and politics of the whole world. This process in the XXI century is always the most popular event for months and even years. People’s interest towards politics increases in proportion to the closeness of the date of election. Thousands of people are involved in the election campaign, and at the time of the election itself millions of people show their interest in the future of their country.

Many of our friends and acquaintances who have never been into politics flourish and start debates like they are on a popular TV show. It is clear that everyone wants to take part in the historical development of the country and no product advertising can stay a chance to the PR of the electoral campaign as one way or another all of the media are required to cover this event. It seems that no issues should arise on this stage but it is only at first glance.

It should be said that this event is widely discussed not in all countries and this is due to several factors: the political importance of this country in the world, the number of subservient mass media, openness of the country and even the predictability of the results of this process. In any case we should discuss what is meant by “election” and talk about the role of the head of state from a philosophical point of view.

“Election” in other words means taking a decision on whom to elect. Any choice always assumes taking a specific decision. Making decisions is not easy: get into a musical, art or a regular school, get a physics, an engineering or a doctor degree, establish a contact with certain people or not, resign from the job or wait for a better time. Any such choice affects one’s life in the future and the effect is incredibly strong. If you think that you will remain a painter once you get in an environment of mathematicians, well, you might be right. But you will be and incredibly different artist than the artist developed among other painters. Therefore, not only your life is changing after each choice but the most important thing changes — you as well.

However, I would like to mention the strangeness in relation to the head of state by the citizens of this state. Often I had to meet people who saw the president or chancellor as a first class person who lives in a place like the Mount Olympus and descends to the people only by his own will or whim. I can assure that this is far from the truth. And despite the incredible importance of the election of the head of state, the president himself is not such an important unit in the country’s scale. It might sound a bit odd but did these people encounter so few intelligent, honest and decent people that the deification of the authorities has become a normal practice? It might be the mentality or the historical development of the country that affected such a point of view of the population, but this mode of thinking is quite acceptable for the Slavic countries.

Ever since the ancient times people united in groups and that was the major cause for human domination on the planet. Of course the groups were very small due to the lack of means of communication. But we can quite easily imagine even today twenty individuals under one leader. The presence in a multi-million country of the most important person gives the society an element of artificial hierarchy. However, in the past any individual could see his leader, could talk to him and was actually acquainted with him. Now, not only we can never talk to the head of our country but we cannot even see him or her. This nuance introduces an element of remoteness of the elite from the total mass of the people. Although in today’s world the elite is no longer very different from individual (certainly not all) “ordinary” citizens, not to mention when this group allows itself the behavior that is quite unworthy of its name and position. Anyway it is worth reminding that our favorite musicians, singers or politicians are same people just like us. Not always they are even more talented than we are, believe me.

As an example let’s consider the situation with the presidential election in the United States in 2016. Right now the popularity of this event grows and the most popular search requests are filled with phrases related to the election. Despite this, the information on the proposals made by the applicants are not in the top of these requests. For an average Internet user the comparison of the candidates for the president of the United States looks like this: 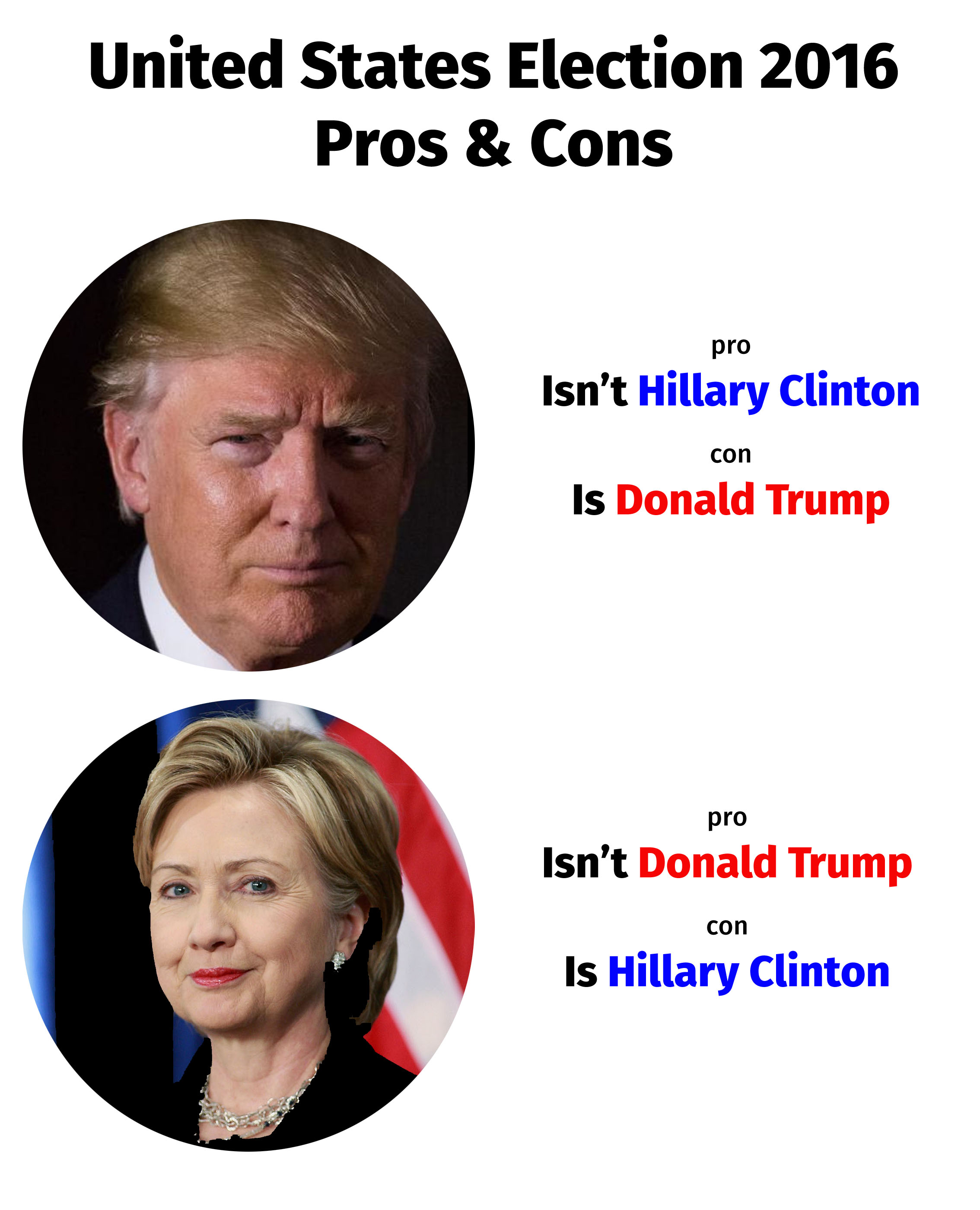 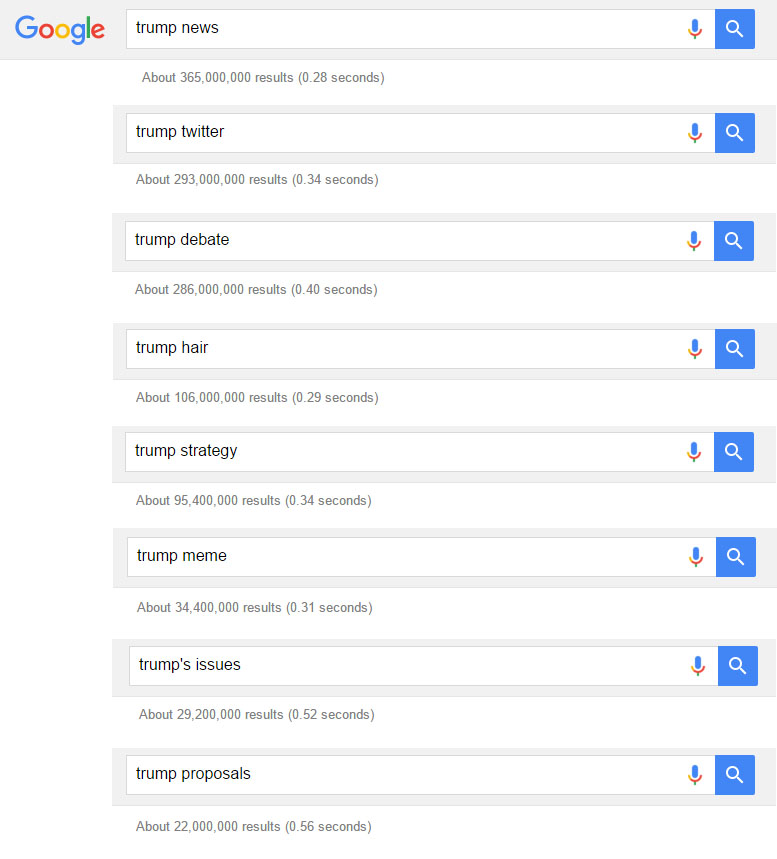 It should be noted that this is noticed not only in the US but also in other major countries of the world. People of course are usually more interested in something funny or what is connected with relaxation rather than work. But in any way the responsibility for the ignorance of the election campaigns of the candidates rests on the voters themselves. The Internet is a mirror of the society and by looking at this mirror you can see that most people are not serious about the presidential election. Thus three categories of citizens can be formed: the first believe in the honesty of the election and are interested when this event is popular, the second think that everything is already decided and the electoral campaign is just a clownery for the first group and the third actually do not care how this act will end.

It must be said that all three groups, not mentioning who of them is closer to the truth, forget that they are not a flock of sheep, but reasonable citizens who got the opportunity to think and influence their surrounding reality. Probably there is a fourth group of discouraged people who see no adequacy around them and therefore remain inactive. Actually, in a sense this essay is devoted to them.

Unfortunately, in today’s world people do not want to think and to somehow have an impact on the history of their country and the world, carelessly giving this opportunity in the hands of more powerful and popular people. After the inauguration all the buzz suddenly disappears and everything that was promised to be done before the election is forgotten or kept silent. Everyone forgets about the election after the event has passed but it is exactly the time when one should pay attention to the politics of the country. And after the election the country goes back on the former course at best or even on the path of least resistance at worst.

This article reminds us to think and analyze in the first place. Probably it sounds quite trivial but less and less people really think nowadays. Never let other confuse and manipulate you. Ordinary citizens engage in their daily chores cannot even think of the dishonest methods which some influential people pursue to achieve their goals: growth of popularity, income, influence etc. Despite this, it is we who need to remain honest and intelligent in that sense in which we are taught this. In that sense opposing ourselves to the flow of nonsense and ignorance in the society as one cannot forget about the honor and dignity even in the 2016, when these words have long ceased to be the beacon of morality in our world.