We live in an amazing time — humans conquer space, explore the DNA structure, and on different sides of the planet people have the ability to instantly communicate with each other. A century ago one could not imagine what technologies we would have. The project which we will discuss today sounds very futuristic, even though it is already in the implementation phase. The project is called “Hyperloop” and it is a vacuum train which will be tested later this year in Nevada.

The idea of this kind of a train was proposed by Elon Musk in August 2013. In the published documentation a route from Los Angeles to San Franciso is worked out. Preliminary analysis shows that it will take only 35 minutes to travel 570 kilometers, the average speed will be 926 km/h and the maximum speed will reach 1220 km/h. In contrast, it takes around 12 hours by train on this route and the ticket price starts from $ 69. It is faster by plane – you will get to San Franciso in around 80 minutes for $ 65 minimum. Going back to Hyperloop, it is expected that the one way ticket price will be only $ 20, well below current prices.

The first pipes have already been delivered to the construction site

Hyperloop is a large steel pipe which is stretched over the ground with a diameter of about three meters. Pressure of 100 Pascal is created inside the pipe — it is a thousand times less than the atmospheric, but it is still not a full vacuum. This is a so called “forevacuum” which dramatically reduces the air resistance. In this forevacuum a train is moving. In the cheapest version the train hangs on an air cushion which is created by an oncoming air flow, which is in a forevacuum.

This project is adopted as the main draft. However, its feasibility is unclear at this point. If this does not work out, there is a possibility of a more expensive project which uses magnetic levitation. In this case the train lies on a magnetic field. This is done so that the resistance to movement of the train is minimal: once the train has a good push, it will glide for a long time and will not consume any energy. Linear electric motors (it is when the stator is fixed firmly in the tube and rotor on the train) will push the train. The electrical impulse causes the train to run through the stator and take a solo flight. According to Musk’s calculations such acceleration modules should be at a distance of about one hundred kilometers from each other.

The train will move a hundred kilometers by inertia and its speed will decrease from about 1000 to 500 km/h. The load during acceleration is equal to 1 g, meaning that a person is able to withstand this. According to calculations, this structure will consume so little energy that the whole vast complex will be able to operate using only solar panels. 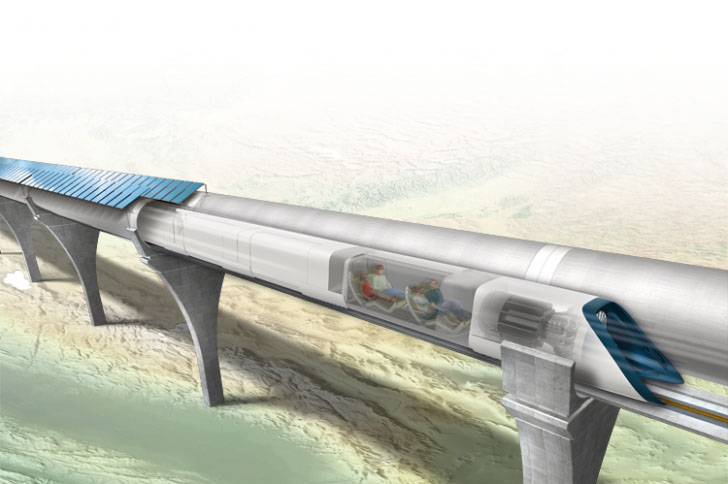 Solar panels will provide the whole system with energy

A sea and an ocean highway concept 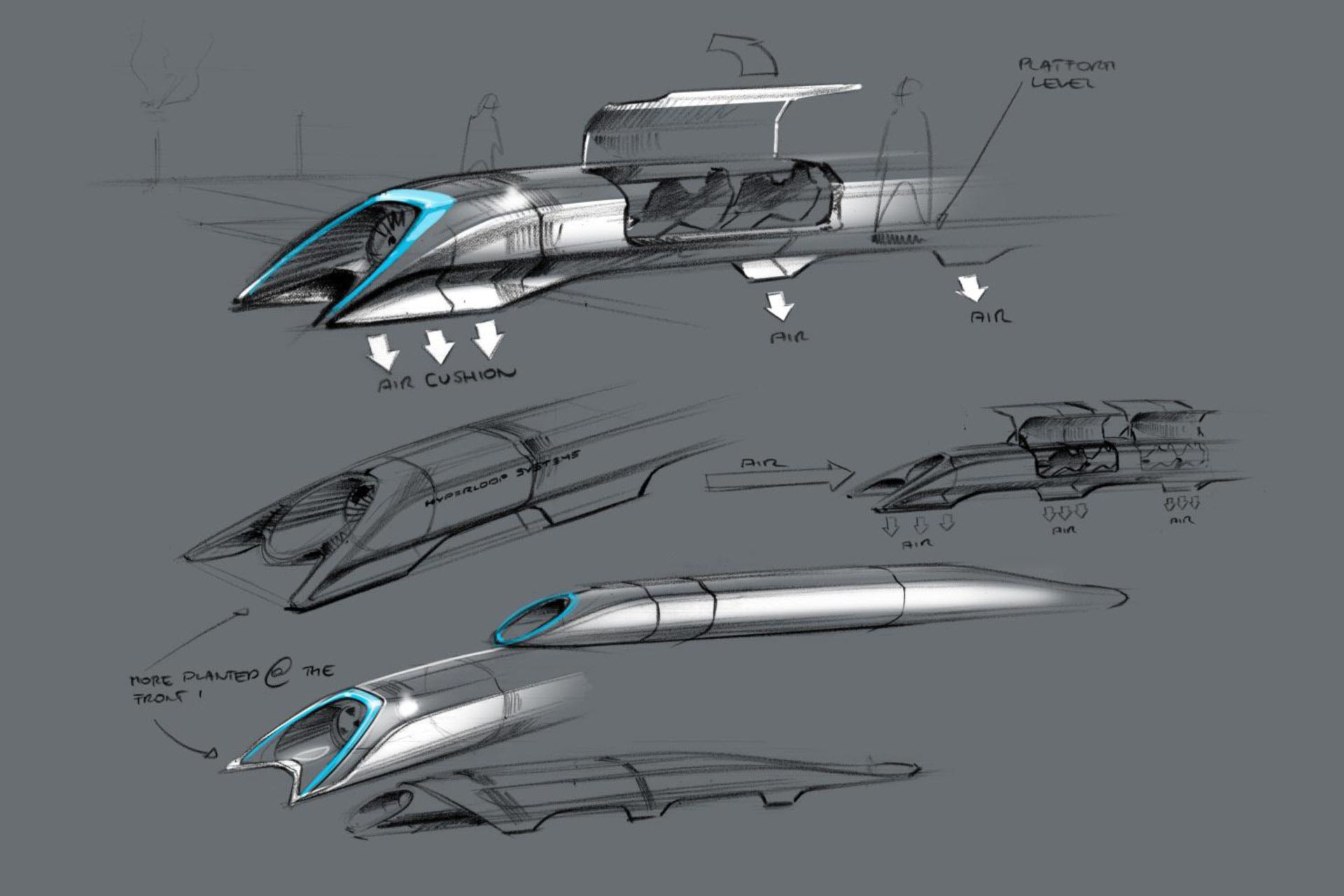 A concept art of the car from Musk’s project documentation

Passengers will not need to adjust to the schedule because the capsules will move in short intervals like in a subway. The project will be 10 times cheaper than the California High-Speed Rail (a high-speed rail system, after the completion of which the average speed of the trains on it will be 350 km/h).

Since Elon Musk shared his idea of the Hyperloop in 2013, many companies have entered the race to make this transport system a reality. A team of 100 engineers of such giants as NASA and Boeing merged into a company called “Hyperloop Transportation Technologies” announcing in December 2015 plans to begin testing on the road under open air in the state of Nevada in January 2016.

The company plans to achieve a speed of 1100 km/h by the end of this year. The distance of the test track is about one kilometer. At the beginning of testing an electric motor of its own design will be dispersed to 539 km/h. After that, the company plans to build a full-scale three-kilometer test track. It is expected to create by 2020 a fully working Hyperloop system.

Two first contractors of the project appeared in August 2015 — companies Aecom and Oerlikon. Aecom is one of the largest in the world which specializes in complex infrastructure projects such as large bridges and tunnels. Since Hyperloop is both, the choice was obvious. Oerlikon is one of the largest industrial holdings in Europe which owns the German firm Leybold Vacuum, specializing in vacuum systems. Leybold Vacuum, known for providing a vacuum in the acceleration tunnel of the Large Hadron Collider, will now start working on the Hyperloop.

The Oerlikon researched the project and confirmed its feasibility. As says Carl Brockmeyer, the head of Leybold Vacuum: “From a technical point of view it is very simple. We are used to more challenging tasks. You’d be surprised how little energy it will take.” Both Aecom and Oerlikon participate in the project for free. Their reward will be shares in the final Hyperloop. Company representatives refused to state the exact numbers, however, they noted that the energy consumption to create zero pressure can be easily compensated with a small network of wind turbines and solar power plants. 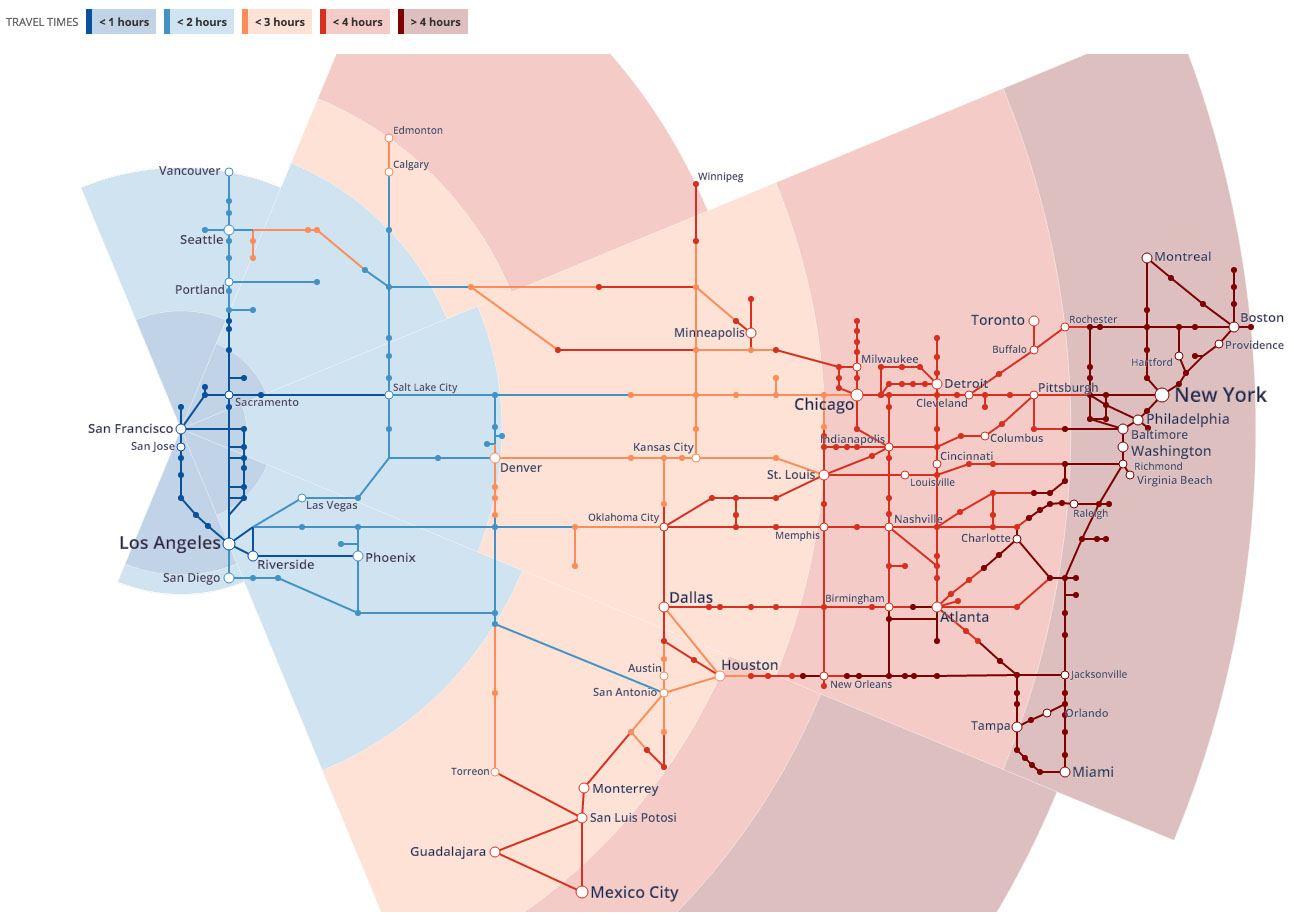 A hypothetical map of the North American Hyperloop network

If a similar project would be implemented around the world, then the distance from Moscow to St. Petersburg, 660 km, could be overcome in just 42 minutes. Now this route on a high-speed train takes 4 hours. And 1095 km between Moscow and Brest (Belarus), which now take 12 hours, would be passed in 68 minutes using Hyperloop! Other examples: 1800 km from Moscow to Berlin would take 112 minutes (now a day) and 9300 km from Moscow to Valdivostok (the famous Trans-Siberian Railway) — 9 hours and 40 minutes instead of the current 7 days.

The new world speed record set a Japanese magnetic levitation train. During test trials on 21 April 2015 it reached 603 km/h. The train almost literally moves through air — just 10 centimeters above the railway lines. It is driven by electric magnets. By 2027 local authorities intend to establish such a super-fast connection between Tokyo and Nagoya. It is expected that the composition of seven cars will cover a distance of 286 kilometers in just 40 minutes. 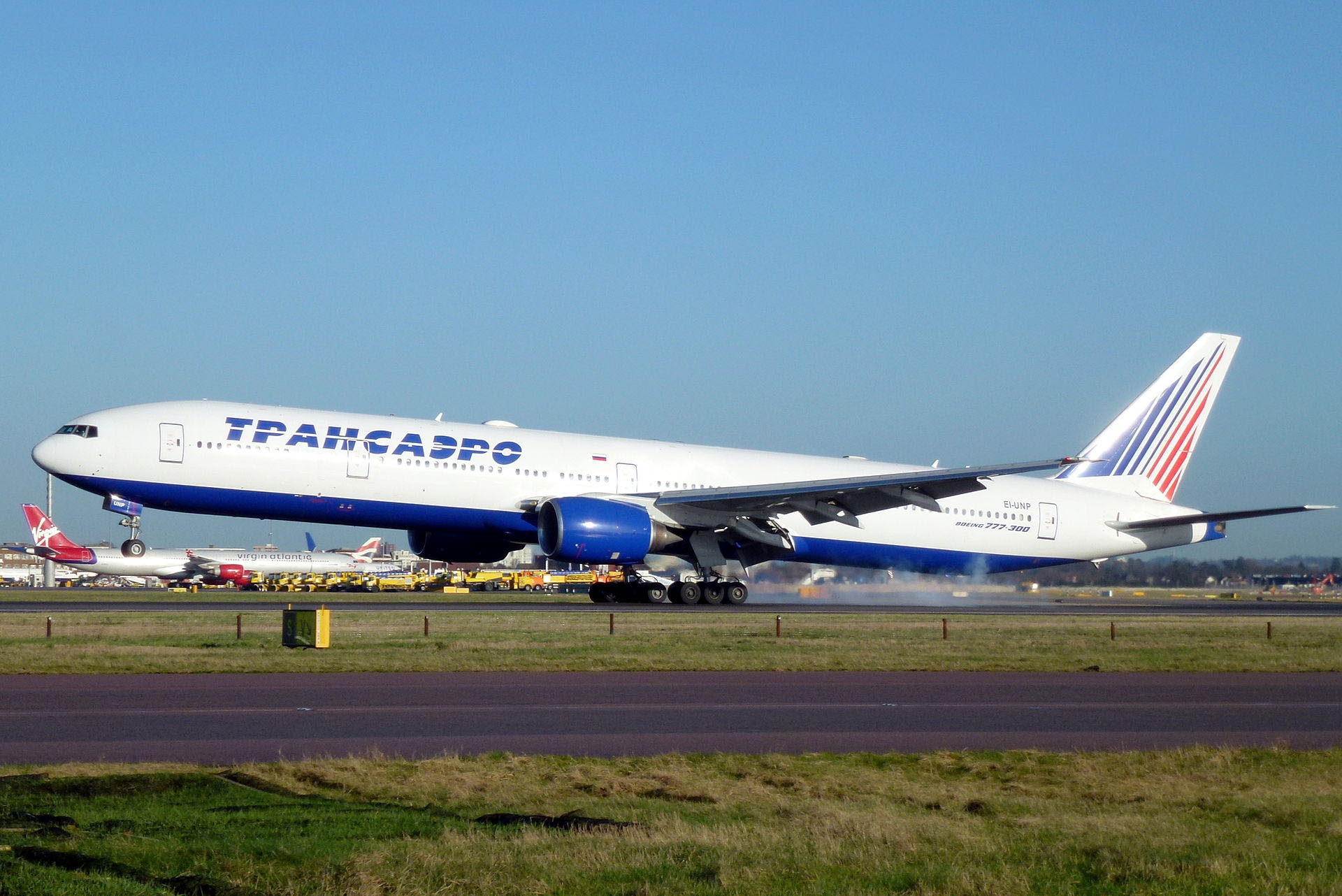 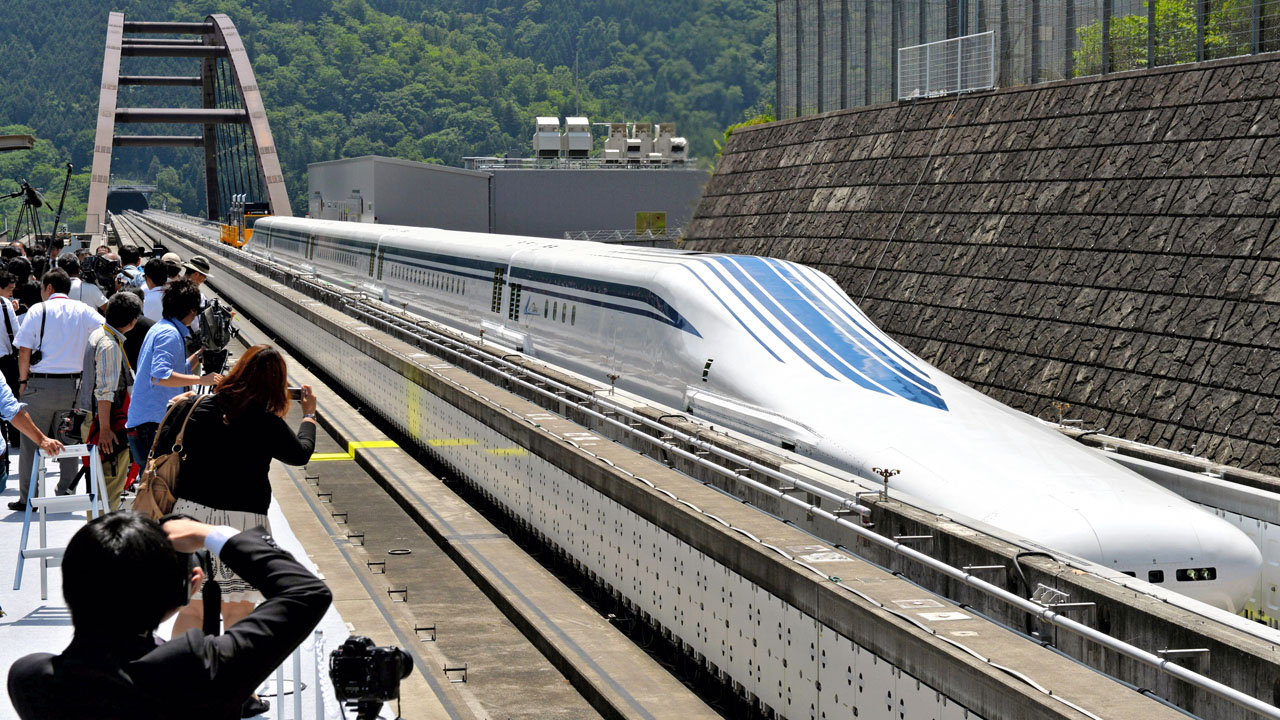 Another example from Japan is Shinkansen, which is widely used in most major cities of the country. Its maximum speed is 443 km/h, however, for safety reasons during operation the speed does not exceed 300 km/h. By the way, Shinkansen trains are not only one of the fastest trains but also one of the safest — in 40 years of operation there were no major accidents.

German train Intercity-Express, manufactured by Siemens AG, can develop a speed of 368 km/h. The maximum speed of this train on specially built for them sections of rails is 330 km/h. On standard parts of the network the speed of Intercity-Express is on average 160 km/h. 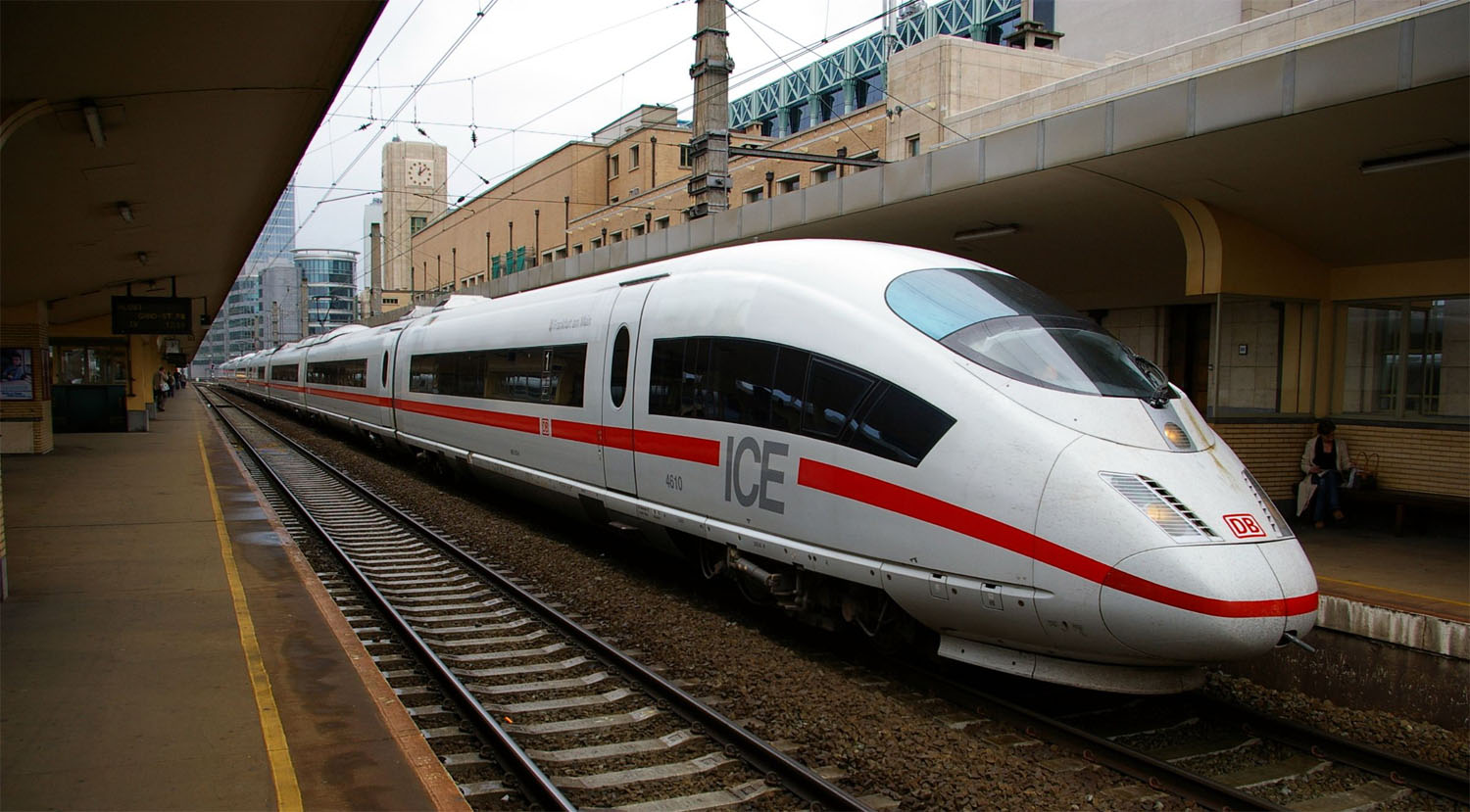 Intercity-Express is also the fastest Russian train known under the name “Sapsan”. Its maximum design speed is 350 km/h, however, there is speed limit on Russian railways to 250 km/h due to the design of the rail. The train runs on the route Moscow — St. Petersburg. In 2011 it was said that the Russian Railways together with Rosatom started the development of high-speed magnetic levitation trains which will run on the Trans-Siberian route. The first trains should appear only in 2030 and they will be able to overcome the distance of 9300 km to Vladivostok in 20 hours.

“Afrosiyob”, the fastest train in Uzbekistan, is another example from the post-Soviet states. The electrical train was developed in Spain and its maximum test speed is 253 km/h. It is moving with a speed up to 210 km/h on the Tashkent — Samarkand route. In Ukraine, the Hyundai train plying on the Kiev — Lviv route, reaches a speed of 160 km/h. In Belarus the Belarusian Railway announced in January 2015 that it increased the speed of passenger trains to 140 km/h. 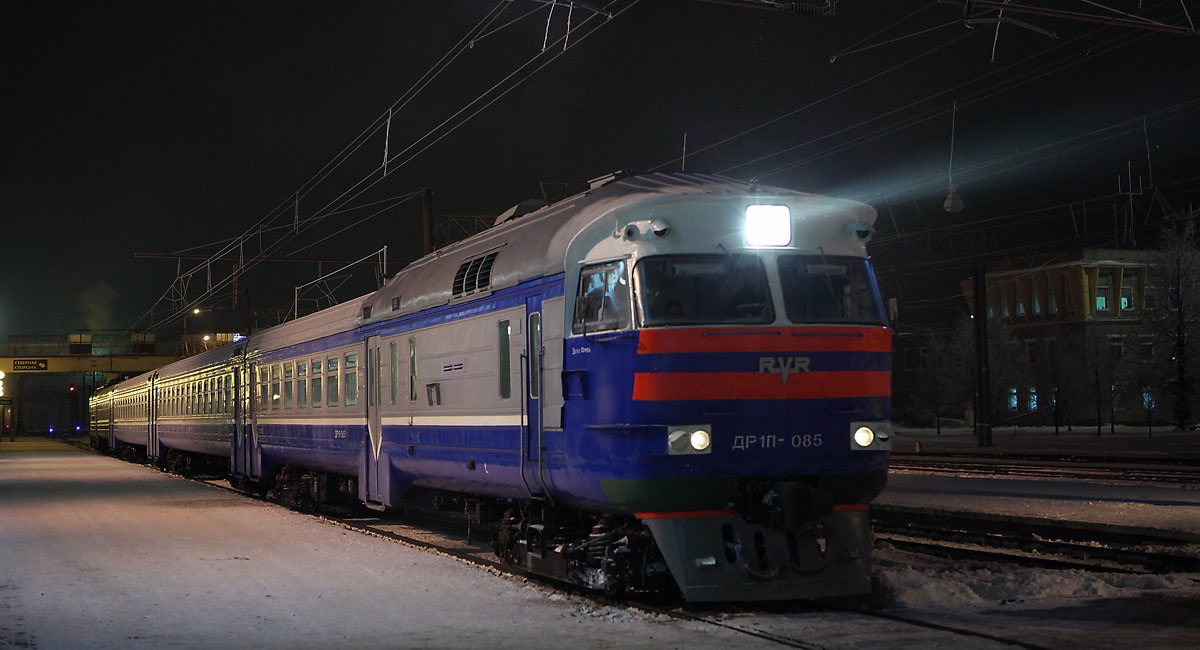 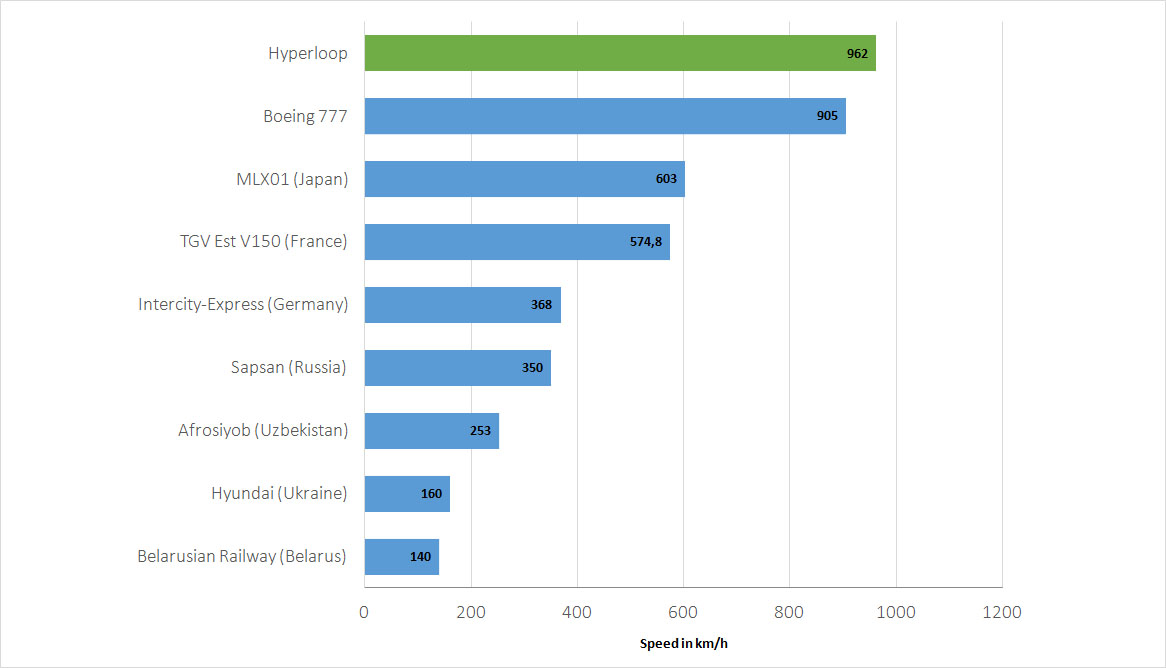 Starting in 2010 there was a discussion of constructing a high-speed line between Moscow and Minsk. However, the passenger traffic in this area did not exceed 500 thousand people a year. Therefore, a high-speed railway line on the territory of Belarus is justified only if it is opened not only to Russia but also Poland, Germany and the rest of Europe. Later in 2012 Anatoly Sivak, the minister of transport and communications, told Belarus News in an interview that “for the successful development of high-speed passenger traffic, a high level of investment is required, corresponding to the volume of the passenger traffic so that the project will be profitable. Currently it is being considered as promising, however it is too early to discuss specific dates.”

This is how the test track looks now

Construction of the test track is the first step towards realization of the Hyperloop project. Even though the idea of building a brand new giant transportation system on a national scale is an extremely difficult task and the obstacles that may stand in the way of such a project are incalculable, the possibility of creating a cheap, fast, all-weather, accident-free and always available transport system is worth such efforts. Let’s wish good luck to Elon Musk. If someone is able to take this project to life, then it is him.