Since the Second World War the war, or at least an active war, has ended for the most countries of the world. This means that each civilian and citizen of his country can be free. Free from the horrors of war, the need to die for his ideals, from the artificially created suffering and losses. But is it indeed so?

Freedom is a pretty polysemous term, especially given the fact that this word is used in a whole range of ideologies, both political and economic or social. In any case, even to understand whether you are free is quite difficult. Not to mention the achievement of this freedom or taking it for granted.

Despite your perceptions of your own freedom, you are a citizen of a particular state or a number of states. Moreover, you enjoy some privileges provided by your country. And countries are sometimes involved in wars, often not on their territories. Even ignoring the question of the moral right to it, we should pay attention to the fact that, defending some interests abroad, the country is fighting with a certain coalition or a large organization. And if the foreign state cannot deal with the problem that means that the organization is large indeed. Given its size, it is worth to talk about its capabilities, especially about the possibilities to reach the country, which intervenes in a local conflict from the outside.

Of course, most of these organizations are recognized as terrorist. But such organizations have their own “worldview”. That is why any terrorist organization considers its right not only to kill the soldiers fighting on the other side of the barricades but also the peaceful representatives of the countries that are hostile towards that organization. And there are no right or wrong sides during the war, there is only endless revenge. Revenge for as long as someone from the “top” will not stop it. This is regarding the question of the responsibility for the war.

It is also worth noting that any war is a huge amount of information that one needs to be able to process while filtering out questionable data. And this is only possible when many sources are used, especially the ones that are contradictory since the truth is born in a debate.

Today, ISIS became the face of terrorism and war in the world. The territory of this terrorist state is comparable with many countries in the world, for example, Belgium, Armenia or Burundi. Despite the fact that this organization is banned in several countries, the Islamic State itself is neutral (or positive?) towards many countries. So, in one of its videos ISIS stated their main enemies that should expect a threat: 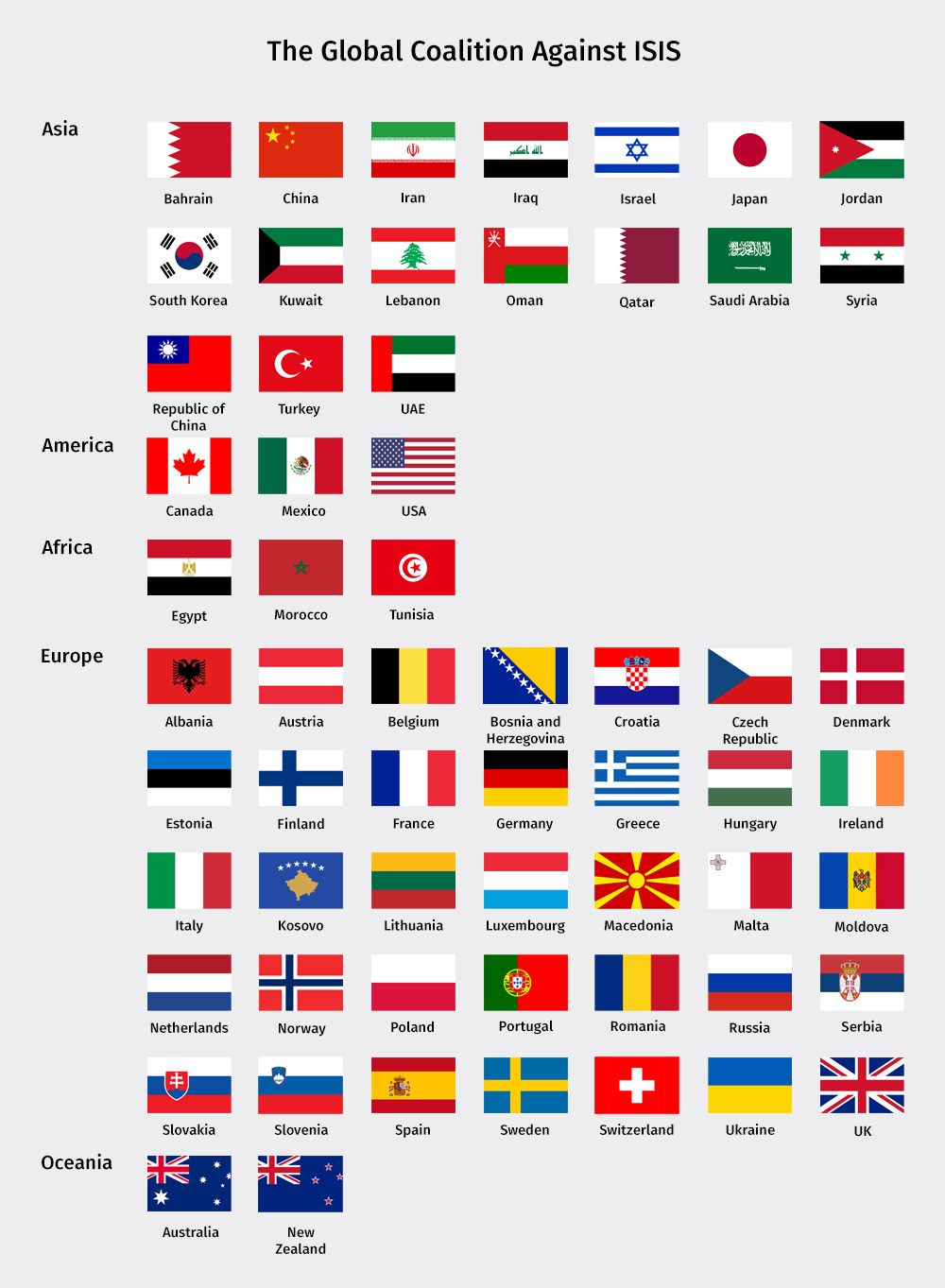 Countries that ISIS plans to fight with

Map of the enemies of ISIS, according to the video

One can have a different position regarding the Islamic State’s threats, but it is worth recalling what territory this organization has been able to capture. In January 2015, ISIS controlled the territory exceeding in area the territory of the 85 recognized countries (more than Jordan, but less than Portugal). Today the situation has changed, and the territory controlled by terrorists has decreased by about a third. Although the threats still do not sound less scary. Especially considering the number of military operations and battles in 2016 aimed at fighting with ISIS or its elimination: 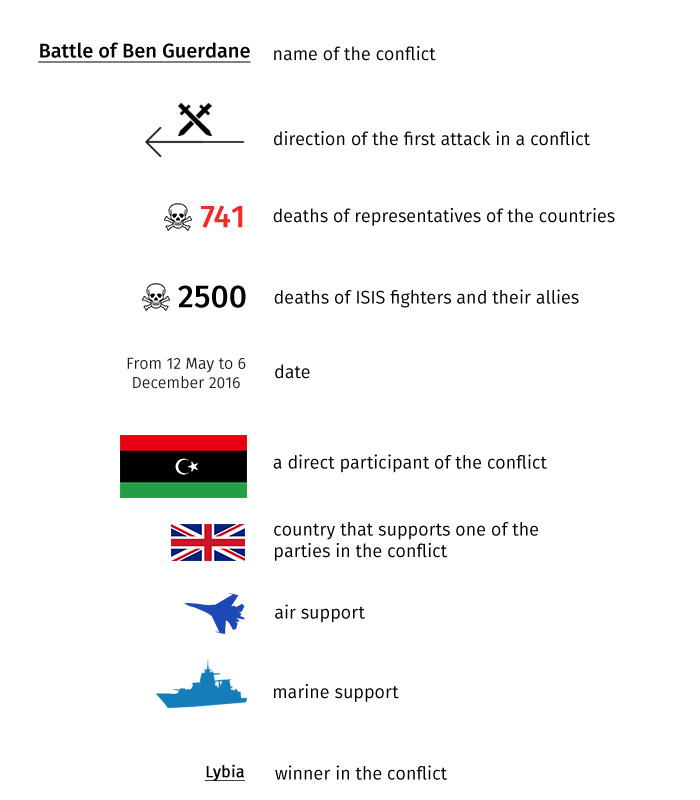 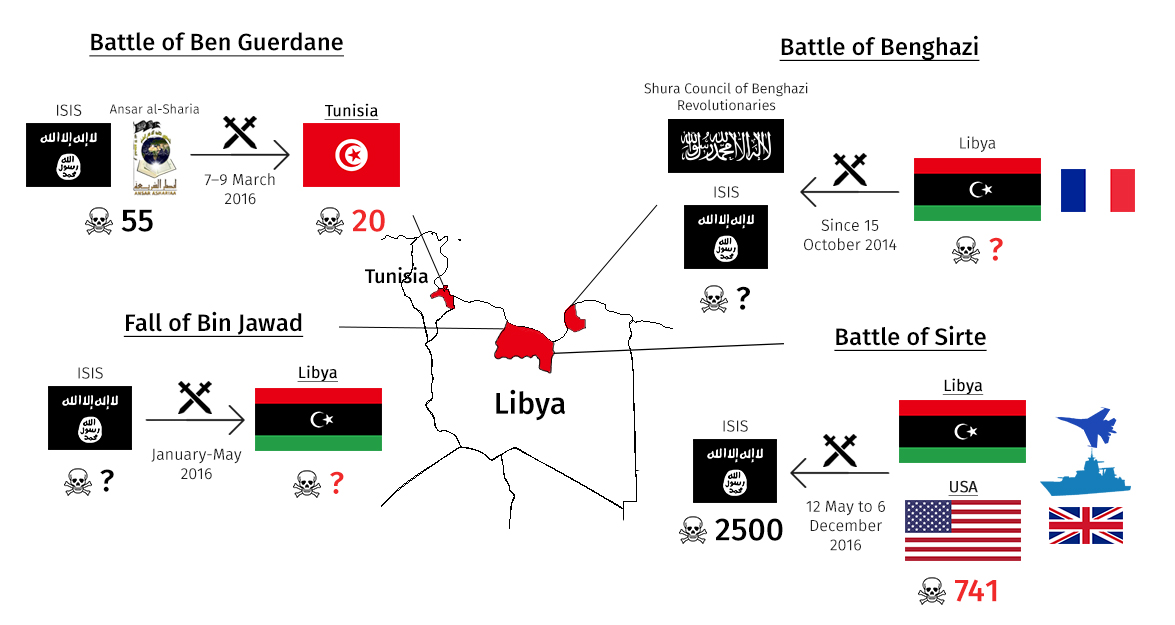 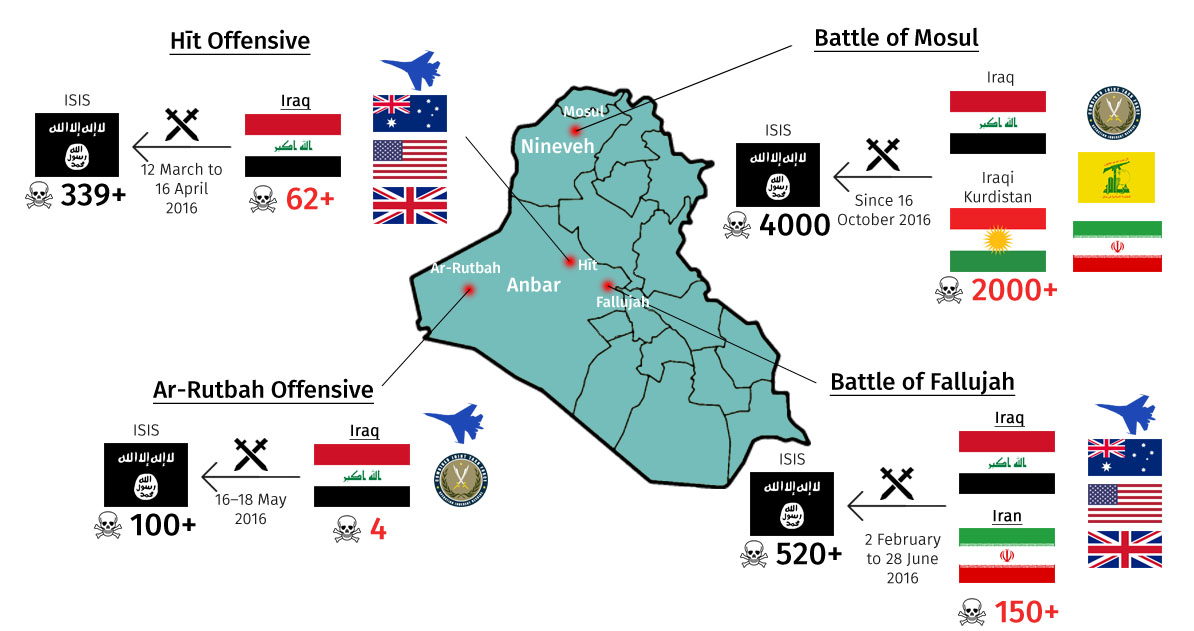 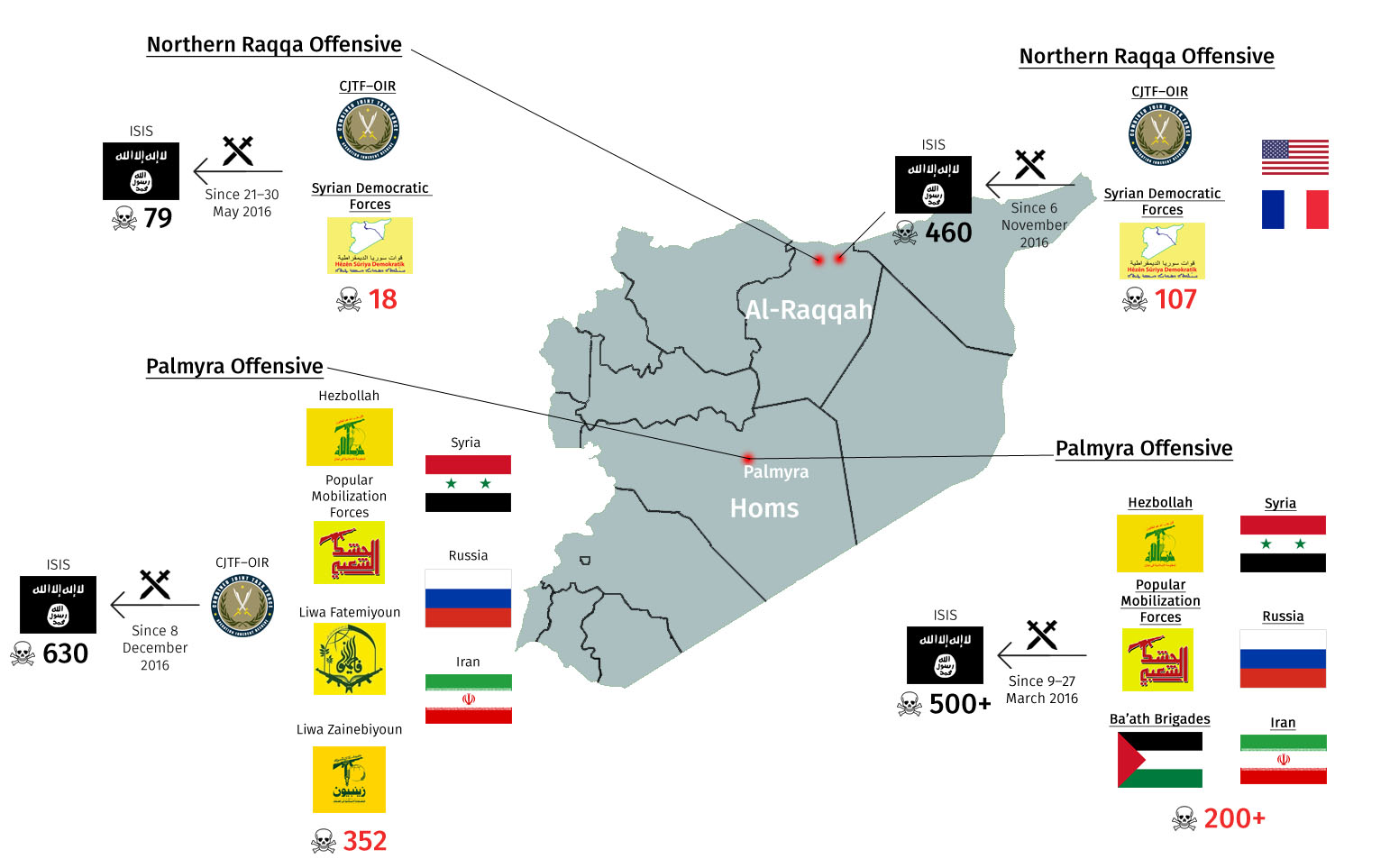 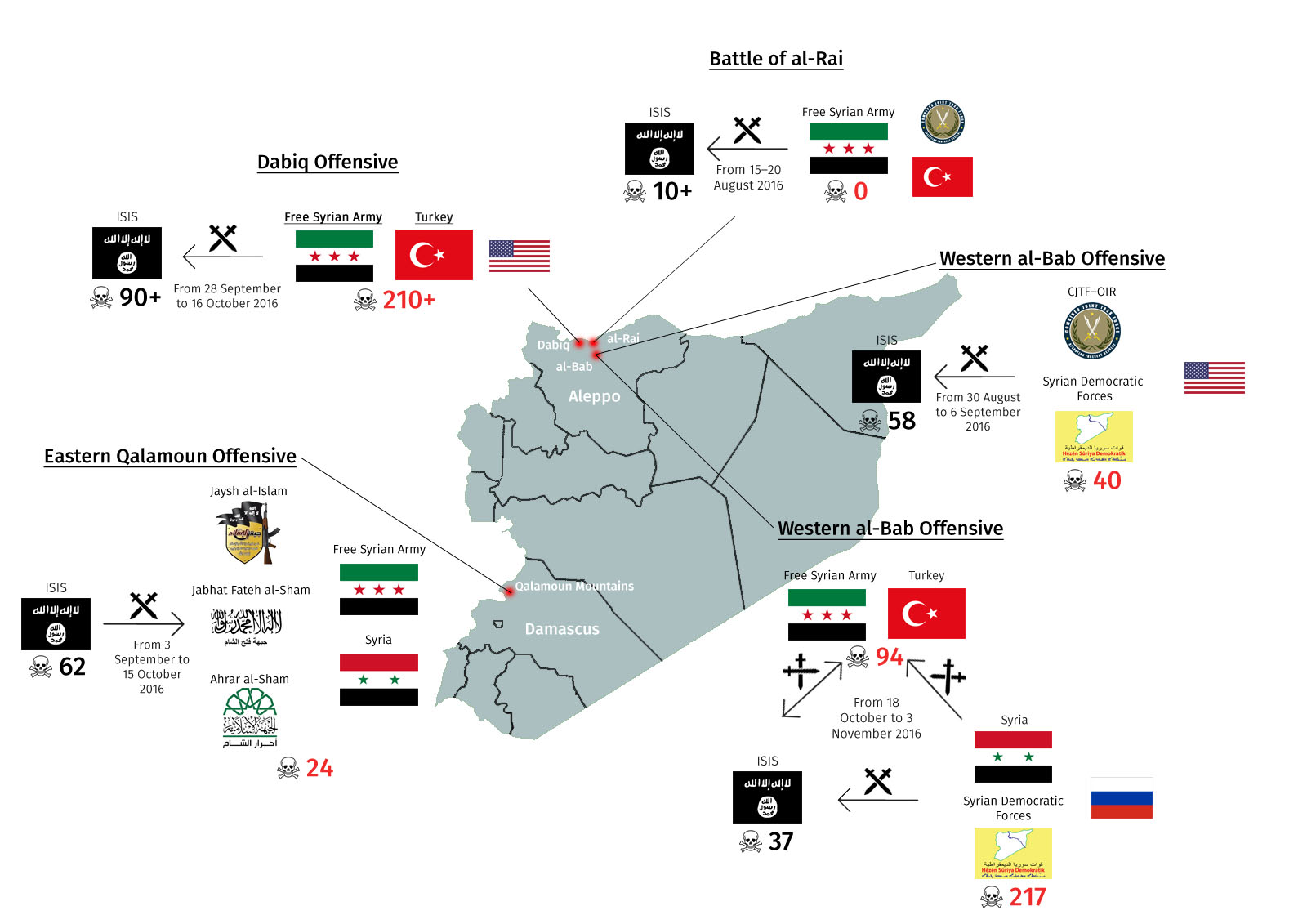 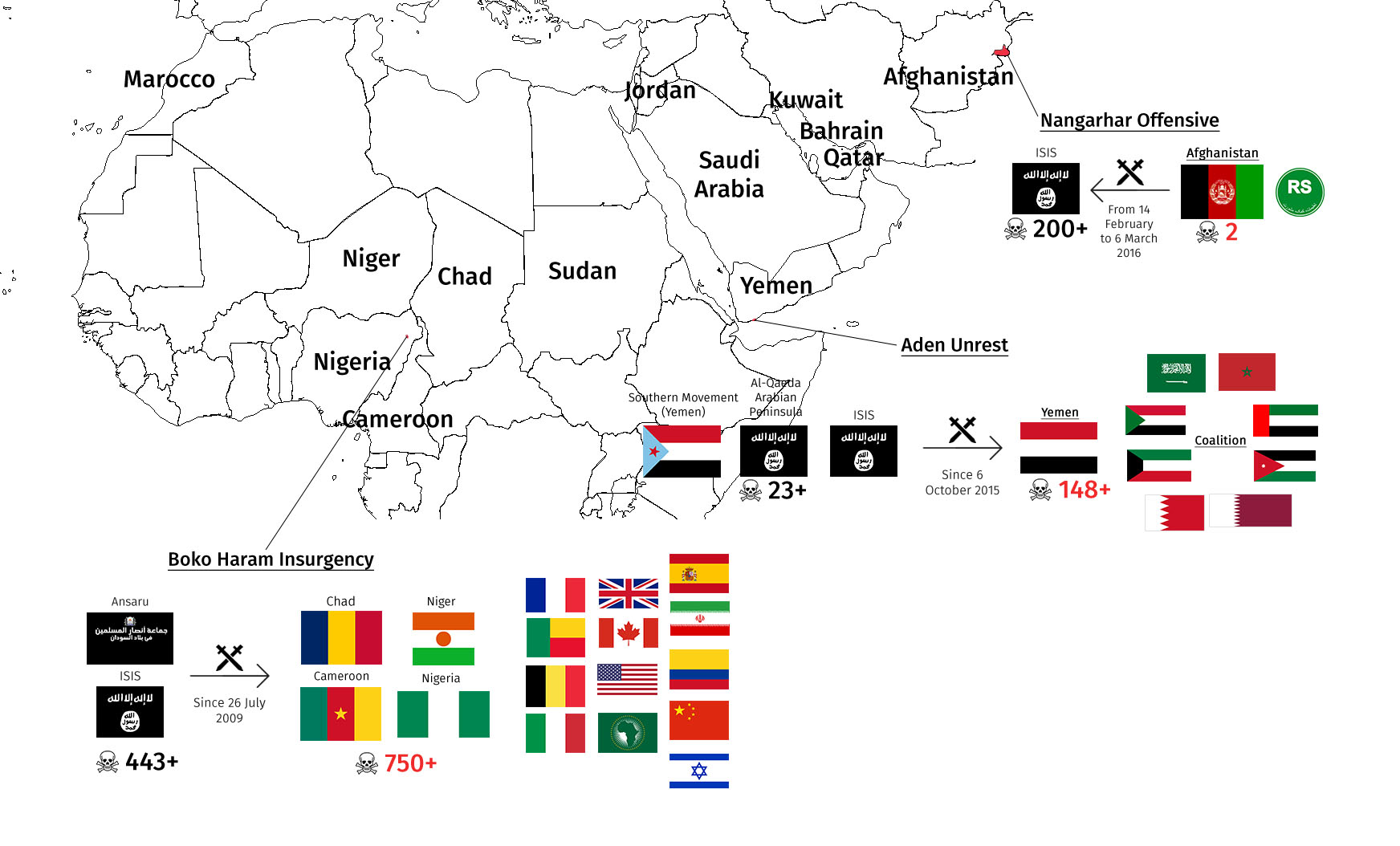 Timeline of the key battles with ISIS in 2016

Now I would like to examine the phenomenon of war between people, in order to understand how free from it we are today and what responsibility do we bear for the fact that it exists.

Firstly, it is necessary to dispel the myth regarding the “sacredness” or “homelandness” of the war, since the armed conflicts have no homeland or sacredness. Other opinions can appear among people that do not understand the meaning of the word “war”, have not read any memoirs and memories about various conflicts and have not met any people that have gone through a war. Of course, such people never fight, but only consider the war as “Holy” from a safe distance from it.

Secondly, as a rule, wars are started for specific reasons. The vast majority of the causes of wars lie in the sphere of foreign policy, even when a war is conducted with a single country. Thus, the main ideological work of “adding” larger masses of people to the conflict, as well as their more active and sincere participation in it can be directed to religious, social and economic differences — the ones which to a certain point a lot of people did not even pay much attention to.

It’s surprising how easy it is to send a large number of people to die. When the fighters do not even know what ideals they stand for, or know, but have a pretty mediocre understanding of it. And we are talking about the main biological meaning of life — to live and survive. But trust and the pointless attempt to do “everything right” allows people to defend the imperial interests of some unknown rules from the “top”. The same person that is not much different from the most silliest of people, given the focus of his activities.

And one may say that the state exists only to shift the aggression of the large masses of people to the foreign policy arena, but for some reason, the internal aggression does not disappear, only sadly complementing the external aggression.

Finally and thirdly, war is always profitable for someone. First of all, to the people that are not directly involved in it, however, often tracking and monitoring its progress. This is the main direction of search for the perpetrators in any major armed conflict. After all, any war has a start and an end at some point. But for some reason, no issues are solved after the war, no public understanding of peace and the ways of dealing with subsequent conflicts is developed. It is doubtful that the situation in the conflicting countries will become better than before the war and that ethnic and religious issues will disappear. And not always the winning side is generally in a better position, which is more than weird and should cause some suspicion.

Anyways, it is worth being interested in the conflicts in which your country participates, directly or indirectly. The time may pass, and perhaps, it will be us that will have to bear responsibility for the actions of the people that represent our country, whose existence we never even suspected.