Every year, according to various sources, 800 thousand to one million people commit suicide, or about one person every forty seconds. This amount can be compared to a very large city, even by today’s standards, when the world population has exceeded seven billion and continues to grow.

Of course, some might say that for such a huge scale this figure is quite appropriate, but try to imagine a city with one million inhabitants which will disappear forever from the Earth in a very short time.

You have probably been to these big cities and you know how many events are happening there, how many buildings and apartment houses have been built for the sake of all these people, how many things and details were purchased, how many economical, political and social ties are there between the inhabitants of these cities. Our reader will also understand that after living twenty years in that city you will not be surprised if you meet a person or a group of people which you have never seen before. You will also not be surprised if that person or these people are living in that city as long as you do.

A city with million inhabitants always has a number of enterprises, factories, universities, schools, kindergartens and what not. This town affects the economy, climate, culture, development and, in general, the life of the country in the most direct way. Such a city is often a capital or is one of the largest cities in the country. Moreover, in many countries the population is just not enough for the emergence of such a truly large city.

As claimed by various papers there are a lot of causes of a suicide: failures in life, financial loss, changes in the usual pace of life and so on. I think that every person can add more examples, but just a search for causes will not fix the issue. And apparently this “search for causes” is as far as it goes in solving this problem.

Many people understand that a prolonged depression can lead to suicide, but every time no one pays attention to it. People are embarrassed or do not want to discuss this with a doctor, while unable to resolve the issue or simply not knowing how to do it. Often the causes of a suicide are insecurities, inability to keep one’s family or home. Of course there is a cynical opinion that suicide is just a form of natural selection, but there are different situations in life, and no one knows how much pressure a person can sustain.

Some countries hid the suicide statistics. This has happened in GDR and the Soviet Union. The number of suicides shows the level of social welfare in a country. And if causes for a high suicide rate in totalitarian countries are understandable, in the modern world, when words as “freedom” and “democracy” are not just “words” in developed countries, the high suicide rate in these countries is hard to understand. But only at first sight.

It would seem silly to hide some figures from the population today. But, nevertheless, there is no need to hide some things as it is enough to draw public’s attention to a couple of issues and people stop paying attention to their own problems, distracted by the random news and problems.

So often, many things seem surprising or even new, but in fact this phenomenon is only the result of deliberately wrongly put priorities in the media. And such misplaced priorities and understatements are actually concealment of information. If one has decided not to mention any important for the people information but decided to constantly mention the unimportant — this is a lie. It is probably not a discovery for many, but paying attention to this issue I suggest to think about it once again.

So, I hope that the importance to discuss the suicide issue as well as its scale I was able to show. It is therefore necessary to address this issue at the state level decidedly but also carefully. Mainly because the state is responsible for its citizens lives in the XXI century. Countries are defined within their borders and in spite of various influences they are more or less independent structures and, therefore, the collection of suicide statistics is carried out in each country separately. It will not be a surprise to see different figures in different states.

You can make different conclusions by looking at this map. In particular, the most obvious — the highest number of suicides is committed in the Eastern or North-Eastern Europe. Thus, it is clearly seen from the map that countries like Belarus, Hungary, Latvia, Lithuania, Moldova, Russia and Ukraine have higher suicide rates than the rest of Europe.

It is worth mentioning, that according to the research of the World Health Organization (WHO), countries are being ranked by the number of suicides per year per 100 thousand people by these levels:

Using this classification the map will look like this: 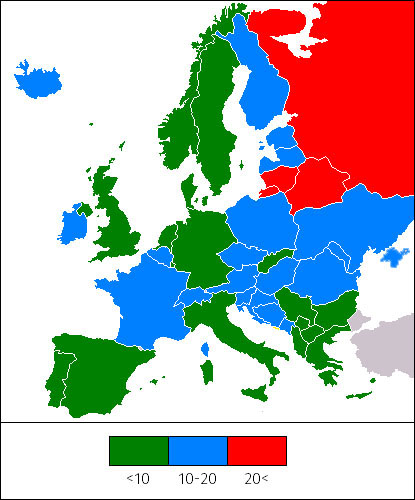 Map of suicides in Europe, according to the division of the WHO

Let’s take a look at two opposite countries — Greece and Lithuania. Greece has the lowest number of suicides in Europe, what is very strange, given the economic situation in the country. There are only 2.7 suicides per year per 100 thousand people in the country. On the contrary, Lithuania has from 28.6 to 31.6 — the highest number in Europe and second in the world after Guyana. All this suggests that the causes of suicides are much more complex than it seems at first sight.

Perhaps the high rate at the east can be explained by the totalitarian past of the region. The Soviet era has affected the attitude and mentality of the citizens, however, besides historical reasons, there could be other factors such as: climate, current mentality, welfare and development of the country, cultural and national characteristics. Nevertheless, in spite of all of these factors it is necessary to deal with this problem. Also, what should be done should be discussed and this issue should be address in public.

There are more than twenty years since the fall of the Soviet Union but the situation is changing slightly. This means that the necessary work is not carried out or the problem does not gain any attention at all. And it needs to be solved. If the issue is not discussed at the state level, then it has to be dealt on your own. In any case it is an individual problem and it is necessary for everybody to pay attention to the mood or even statements of our loved ones, our relatives and be more careful to the world around us.

It should be noted that the hotlines are working in all of the mentioned countries and if the people around you do not pay enough attention, you should not be afraid to seek outside help. It is important to understand that no problem can cost a human life and that having a bad mood for a long time may be symptom of depression.

We hope that this article will remind us of the people around us and that everybody who will read these words will ask their relatives or friends whether they are “OK”, and in the future will be more careful to him- or herself and to the people around.