Educated and civilized people often enjoy talking about the history of mankind or certain historical events. Most of these conversations make you think and some allow you to consider the events of the past from a completely new side. It is true: the nation that does not remember its past has no future. But will a whole species have a future and what is necessary to remember to each and every one?

Human is the only creature on the planet that is capable of conscious thinking, is able to operate with complex structures and even invent new worlds and plan its activities for years to come. This all is true and this fact amazes and elevates the human child over the cubs of various mammals, insects, birds and fish. Of course, the cultural or evolutionary value of a species can be different, but not taking the biological importance of this species into account in any case is impossible.

If we ignore rats from the history there will be no diseases carried by them, should we ignore cats, a significant amount of people would be elementary more troubled and meaner, not finding comfort in their beloved bet. In this alternative universe, the history of mankind would have a completely different look. Perhaps, by cutting one or a couple of species from the food chain, the whole life on Earth would die. That is why we will move away from the traditional anthropocentrism today and will try to descry the reality more objectively, taking into account the maximum number of factors.

As mentioned above, discussions about the history may not be very popular in mass culture, but they have a certain niche. If we think about the way the word “history” is used today, we will then understand that in most cases we are referring to the “history of mankind”. So, with that word: revolutions, charismatic politicians, dictators, wars, reforms and inventions are associated. Of course, it is unwise to have something against the usage of the “history” word in this context as one person is unlikely to affect the fundamental changes in the language. But it is worth to mention that such understanding has developed due to the perception of our species as the most important and in a way — the central creature. And although anthropocentrism has outlived itself — we know that there are hundreds of billions of stars in the Universe, around which new planets are currently being discovered, it is reasonable to assume that the chance of the existence of another civilization or just life beyond Earth is quite large. Geocentricism was once the prevailing view, but it turned out that our planet is far from being the center and it is most likely that the Universe has no center at all, and by looking at a projection of our galaxy and the location of our planet it in it, ideas about the centrality of Earth leave our mind immediately. 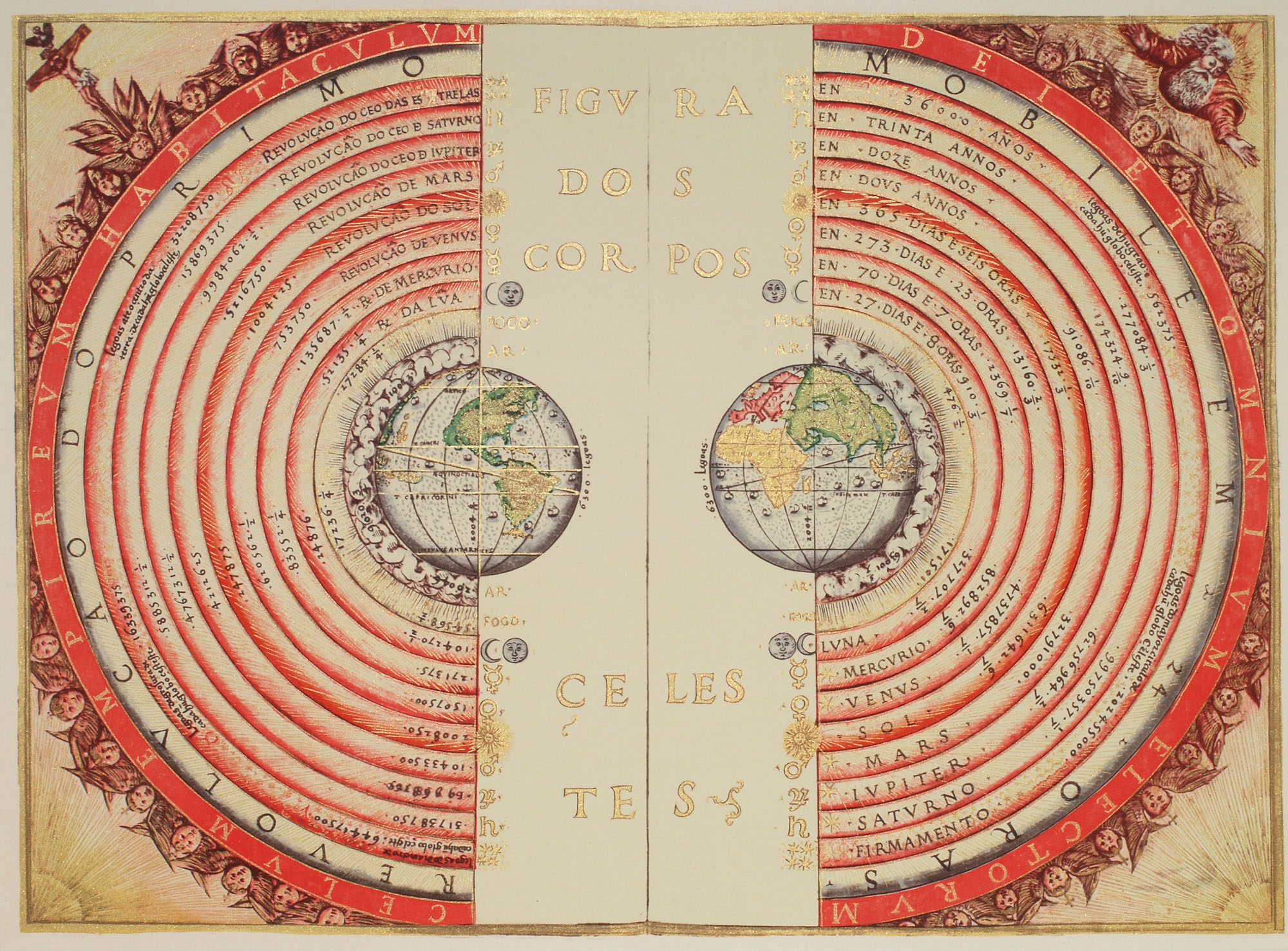 «Figure of the Heavenly Bodies» — a geocentric model of the Universe, painting by Bartolomeu Velho, 1568 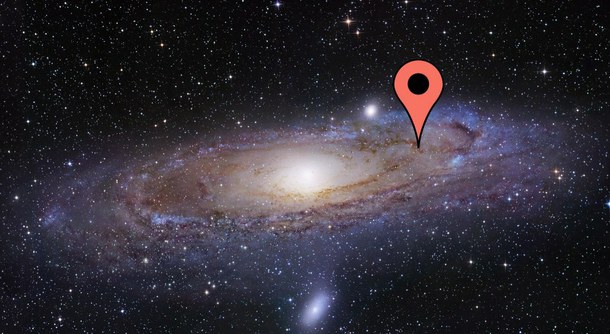 An approximate location of the Earth in the Milky Way galaxy

This is why people gave up on geocentrism and anthropocentrism. But after giving up these concepts, humanity still continues to mentally believe in them. This happens on some subconscious level. And at the same time it takes away from each individual human a large layer of historical events and of the current situation of things in the universe. Living in the daily activities a person does not believe in the remarkability and the transcendence of the world.

When we read or hear discussions about a work of an internationally recognized author, often these discussions start from that person’s biography. After all, it is important to know what factors influenced the formation of the personality of the writer, what were the professions of his parents, and why did the author address specifically that theme or problem and so on. Same as in the characterization of any transnational company it is necessary to refer to its founders and their history.

Why then, when it comes to the history of mankind, we immediately proceed to certain historical events that were earlier defined, or we begin to talk about creationism, evolution, panspermia and most of the attention is paid to the representatives of these points of view. Of course, a debate is often interesting but the truth is more important. Therefore, it is important to start looking for the origins of the human nature not in the eighteenth, fifth or in the zero century AD, but from the very beginning.

It is necessary to start with the history of the Earth as it is our first and only home. It is exactly here where our species was born and therefore the Earth is the most appropriate object of study for us. As was said above, it would be a mistake to seek the origins of the modern human nature only in the history of the man as a species. Therefore, it would be much broader and more objective to draw attention to the birth of our planet as the source of life in the Universe. 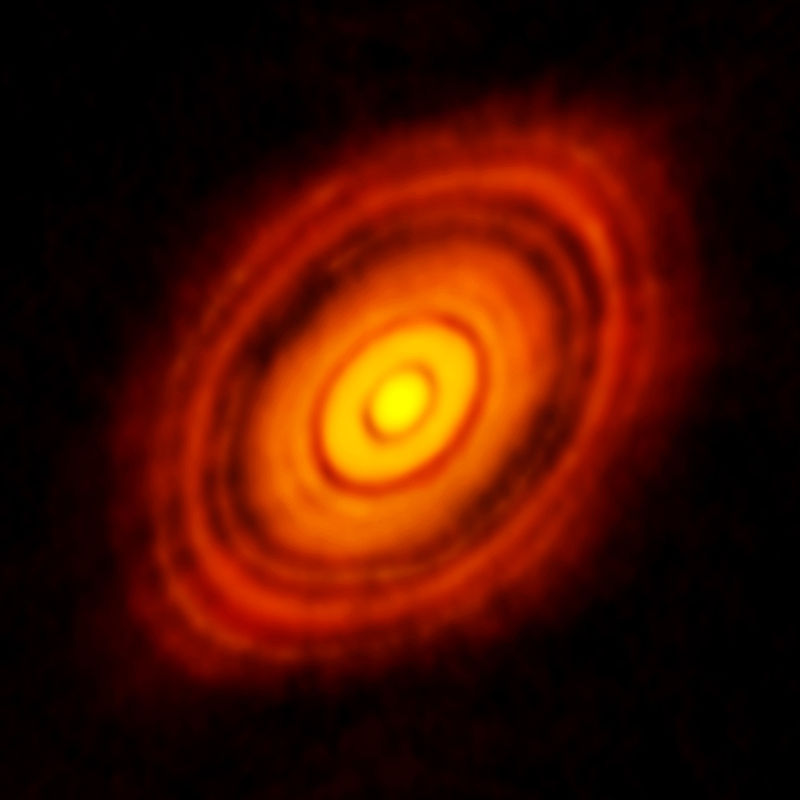 The image of the protoplanetary disk around the HL Tau star

The formation of a planet starts with the formation of a gas and dust cloud around the forming star. Later, the star forms a protoplanetary disk in which the processes of planet formation definitively end. This process took place on our planet 4.54 billion years ago.

According to different ideas, the Earth looked like this

So, as a result of the phased evolution of the lithosphere and the organic world, we can distinguish certain stages in the development of the Earth which are reflected in the geochronological table:

It is worth noting that each era in the presented table takes hundreds of millions years of time, in other words, there is a presence of an incredibly vast period of occurrence of unknown processes for the formation of the basics for our life as well as the formation of us.

The way of allocating a certain number of epistemological positions of the various sciences in the modern world looks quite strange. Often in the global scientific community “history” is generally referred to the history of mankind, though the definition of science rarely skips the word “objectivity”. And using objectivity, the understanding of the “history” word should lead us to a much more extensive period — from the beginning of the formation of the Universe and to the present day. Of course, the level of difficulty of each individual science grows and it is harder to be versatile in this regard, but if we want to understand the genuine essence of the past and the future, all this is necessary. That is why it is important not to stop the study of the human history, but also understand how the human was born by analyzing the time when people did not exist, that is, the time that is usually not accepted to be analyzed at all, by going to explore completely different sciences.

We can say that the formation of our civilization began with the formation of our planet Earth and, as strange as it may sound, it was then when our journey in history has began. So, we can determine that we have already existed back then, albeit in a different form and unconsciously, but quite actively, by transforming into various forms, we came to the current form and we will then also be reborn into something new.

Arthur Schopenhauer, arguing for quite some time about death in his work “The World as Will and Representation”, creates a whole concept which he calls “palingenesis”. That is what it tells us specifically. As a biological being, a human acquires certain features: an individual voice, eye color, hair color, height, weight and brain. The memory follows the brain which a person gradually fills with the events from his life and distinctive features of his personality. Hardly a person is just a couple of memories and a life path. I think everyone feels something more behind the word “I”. Nevertheless, according to Schopenhauer, even dying, a human’s will continues to exist in a different form. Although, it is worth noting that the concept of “will” can be interpreted by many people as a simpler and flatter concept. Thus, by studying a certain number of events one should always look at things in a much broader way and remember of the deep and long-term history of prehistoric times, gather from them a probable future of the mankind.

In the following materials we will look closer at the life forms that existed on our planet long before humans, which will lead us to an understanding of our essence and the possibility to predict our future.