In the US, private companies already conquer space for several years and we have already written about the largest of them — SpaceX. What is the situation in Russia? We spoke to Pavel Sergeyevich Pushkin, the founder and CEO of CosmoCourse, and asked him about the first private Russian company which is engaged in space tourism. 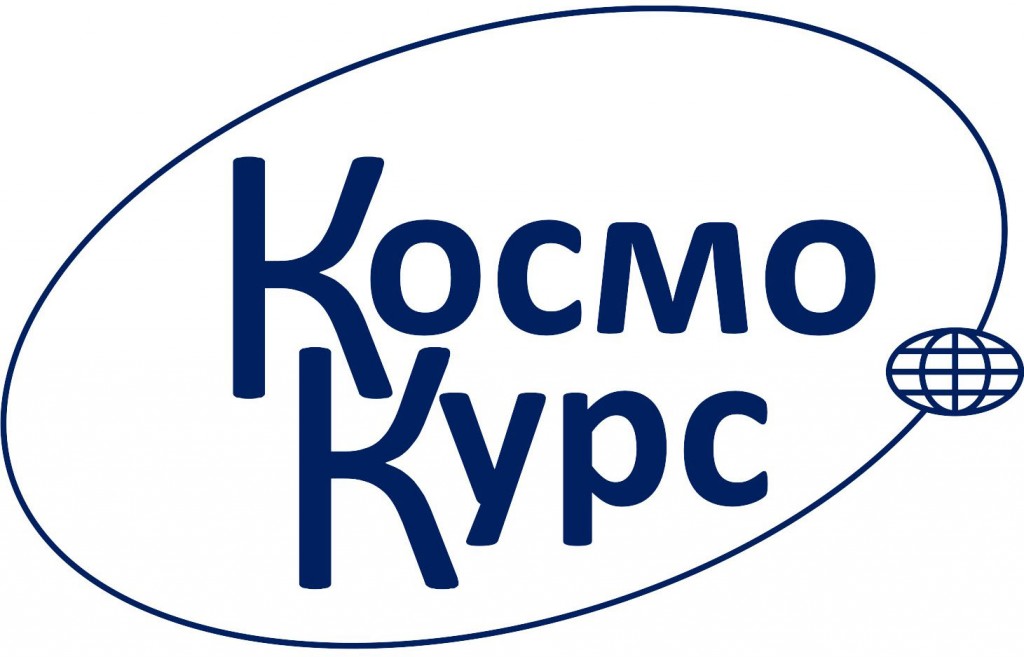 — Please tell us a few words about yourself and your company.

— We have a private Russian company which was established in 2014 under the realization of the suborbital tourism project. I myself came from the space industry and worked before in the Khrunichev State Research and Production Space Center as the deputy head of the design and research center.

— How and from whom did the idea of creating CosmoCourse emerge? How was the organization created?

— The idea came together from me and our investor, as in the other form without a special company it would not be possible to implement this project. The initiative to finance this work naturally came from the investor. I, on the other hand, prepared the technical materials for the project.

— How one can get a job at your company? What education is required?

— In order to get a job at our company it is necessary to write an e-mail to us or just call. But of course one needs to have a rocket and space education profile and have a good knowledge in the design of rockets and spacecraft. Also the candidate must be able not only to calculate or draw something but also should be able to express their thoughts and formalize the work results on paper.

— If not a secret, what is the structure of the company? Do you have many employees?

— At the moment, we have a horizontal structure of the company and have more than ten specialists who deal solely with the technical issues.

— Where is your office located?

— The office is located in the metro Kiyevskaya area (note from “The Dialogue” — Moscow, Russia).

— Were there any difficulties during the registration of the company (as there were no similar companies in the country before)? Does the government support you?

— Naturally, there were great difficulties associated with the fact that we were practically the first who started to cooperate with the government within the framework of realization of a purely commercial space complex. But we were able to prove the seriousness of our intentions and justify the need for the coordinated support of our project by the state. As a result, our project will be implemented in close cooperation with the state corporation Roscosmos and we have agreed with them on the technical requirements document on the implementation of the pilot project.

— How is the project progressing? What is done? When will the test launches be?

— At the moment, we have begun to implement the pilot project; we are working closely with the cooperation and institutions of Roscosmos. Currently this is a paper stage, but specifically on this stage the project is formed and the implementation of all requirements to the complex is formed. It depends exactly on the implementation of the pilot project how the rocket will fly.

— What problems arose in the process?

— The main difficulties arise in the formation of the cooperation of the developers. No one actually created reusable systems before and the task of transportation a large number of tourists did not arise. Therefore it is necessary to convince developers to implement new and not classic requirements. Also for everyone at the first time there is a shock that after the paper there will be hardware and tests, and not more paper as usual.

— Who will produce the launch vehicle and the passenger capsule?

— This question is still in the development stage. In the pilot project we will consider a variety of potential manufacturers of the parts of the complex. In this regard, we plan to work closely with the URSC (note — United Rocket and Space Corporation).

— The components will be domestic? What percentage will be foreign?

— Currently we focus on the domestic components and they more or less satisfy us. At the same time, we consider the usage of imported components for the most bottleneck parts. Meanwhile we have the same problem issues as the entire space industry and we hope that together with Roscosmos and the URSC we will solve the problems that arise in this field.

— Will the launch vehicle and the capsule be reusable?

— Yes they will be reusable. 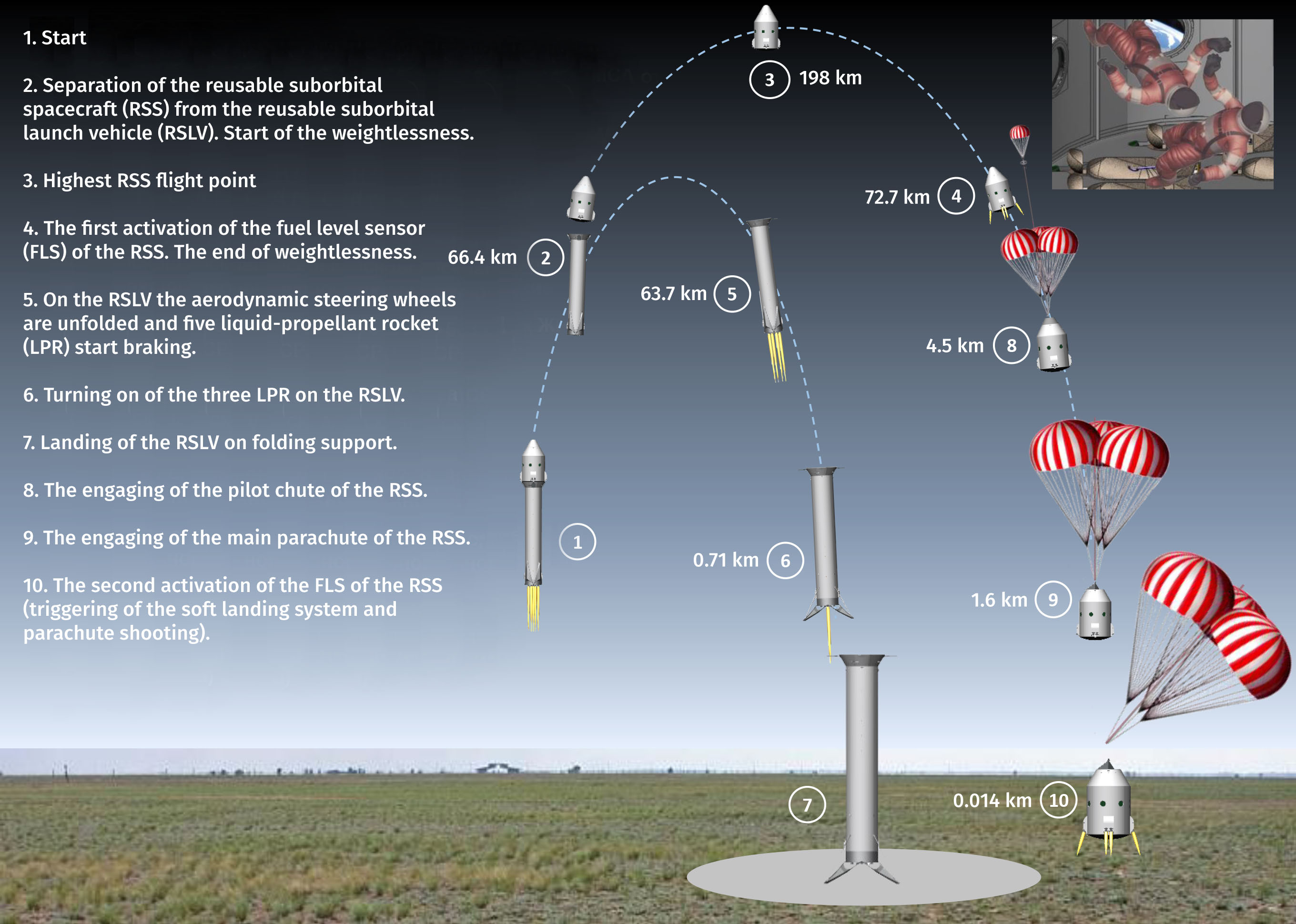 Landing of the launch vehicle and the capsule

— What companies do you cooperate with? Perhaps, they are also private? Only Russian or foreign also?

— We work with private companies and with the governmental. Meanwhile we do not plan to work with foreign companies in terms of rocket technologies, since there is a limit to their distribution.

— Do you cooperate with institutions and universities? Do you maybe give lectures or take interns?

— We still do not fully cooperate with institutions and universities. There is some interaction with Alexander Shaenko from MAMI (note — Moscow State Technical University) as part of realization of his educational program. We are ready to take students for internships. However, universities are in no hurry to cooperate with us in this direction.

— The requirements to tourists will not be serious. Each potential tourist will have to undergo a medical examination to determine the presence of serious diseases and pass a test on the profile overload in a centrifuge. Only then we will be ready to sign a contract with him. Then the instructions and a small training are waiting for the tourist. The whole flight preparation cycle will take no more than three days. In flight, the overload will not exceed 4 units during the launch and 5 units during the descent. In emergency situations they may be higher but will still be in the acceptable range in order not to harm the health. For example, during an amusement ride, overloads can reach 6 units. At the same time no one requires a medical examination or a medical reference when boarding the ride, there are even no health requirements imposed.

— What will be the ticket price on your rocket?

— Do you count only on Russian tourists or on foreigners as well? (What are your promotion plans outside Russia?)

— We focus on the global market including the US and China. We are currently working in the direction of organizing tickets bookings, contracts making and foreign tourists.

— How much time the tourists will spend in the weightlessness?

— In the weightlessness the tourists will spend 5–6 minutes. During this time they can unfasten, fly in the capsule and fully enjoy the weightlessness, combining it to the views of the Earth at the height of Gagarin’s flight.

— What do you think of Blue Origin, SpaceX and Virgin Galactic? Do you keep in touch? Do you consider them your direct competitors? What are the advantages and disadvantages of CosmoCourse in contrast to these companies?

— We are closely monitoring the activities of these companies. The most advanced in terms of space is SpaceX. Blue Origin is leading the suborbital tourism and in terms of sales the leadership belongs to Virgin Galactic. The Blue Origin project has better characteristics in comparison to the Virgin Galactic project: the safety issues are better addressed and the duration of the whole flight is more than twenty times less with the same flight height and the same time in the weightlessness. That is: the quality of the Blue Origin project higher. Our project is similar to Blue Origin, but compared to them we have a higher flight altitude (200 km against 100) and we have more time spent in weightlessness (5–6 minutes versus 3–4 minutes).

— How safe will it be to fly into space using your rockets?

— We focus on a fairly high level of safety which is approaching the safety level of aircraft flights which is significantly higher than that of the existing space flights. These safety requirements are well implemented during the suborbital flights where the flight time is not long and there is no orbit reaching.

— What are your plans for the future? Maybe there are plans to get out of the tourism industry and work on satellites delivery into orbit or on astronauts delivery to the ISS? Perhaps there are even more ambitious plans?

We are going to continue talking about private astronautics in Russia. Meanwhile our readers can follow the progress of CosmoCourse in their official group on VK.