Asia is the largest part of the world in terms of population and territory. This leads to greater diversity not only in ethnicity and nature but also in culture. Asia has fifty independent states. The population of this region amounts to more than four billion people. So, quantitative superiority allows us to speak about the diversity and prevalence of cultural features.

There are five regions in Asia according to the division of the UN. 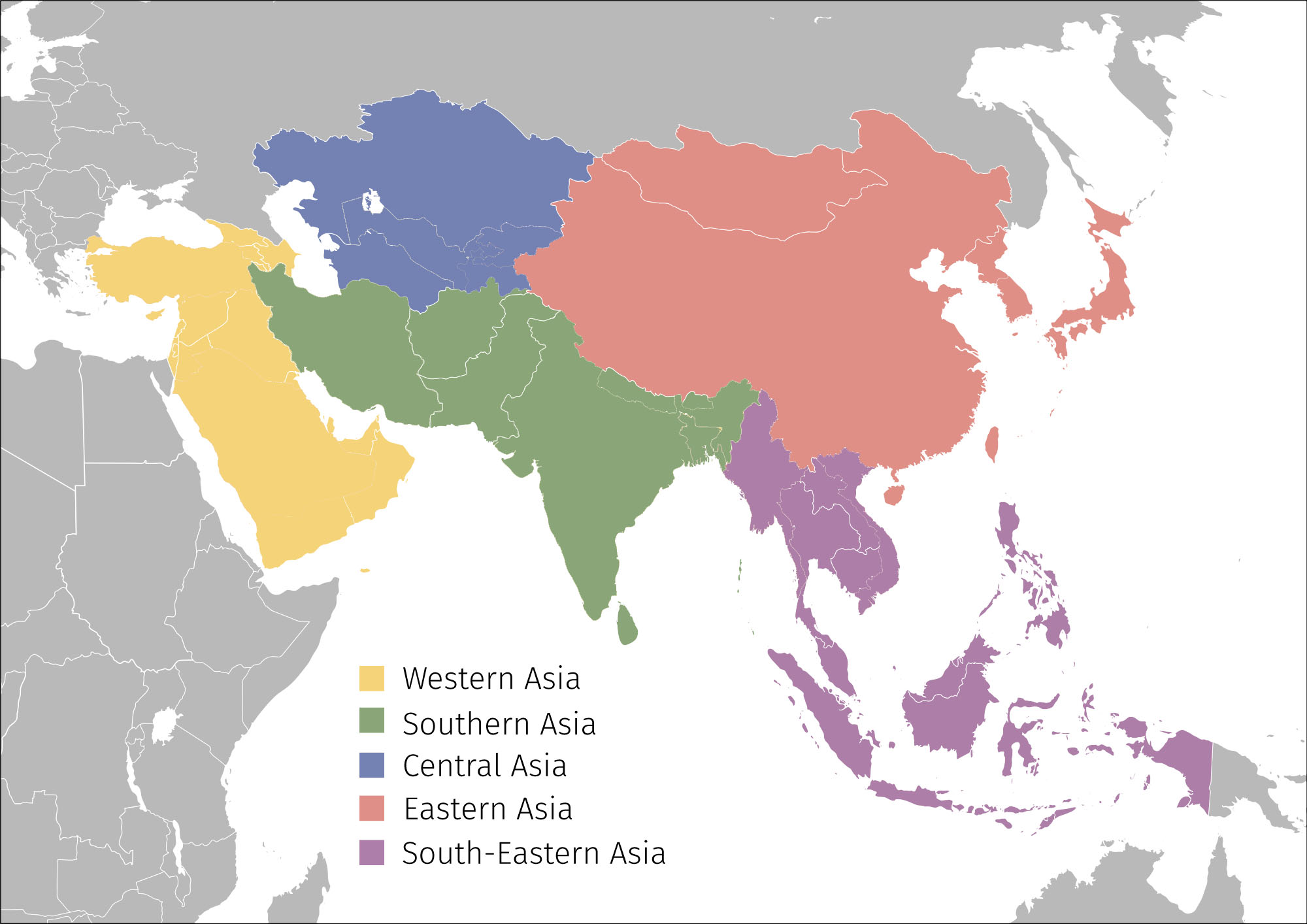 Subregions of Asia according to the UN

However, often the subject of dispute becomes the border between Europe and Asia, rather than the division of the region. In previous articles we segmented flags into groups and created maps of Europe and Africa based on that division. It will be interesting to see how the largest part of Earth will look like. Well, let’s add to the previous two an analysis of such a vast region named Asia.

It is worth mentioning beforehand that the majority of Asian countries (43 out of 49!) have a red color or its shades on their flags and an impressive part of flags consist for the most part of that color. Why red is so popular among Asians is unclear, especially considering the amount of countries using it. Nevertheless, this interesting observation once again proves us that there is a fairly impressive impact of natural conditions and the geographical position on the human understanding of the world, aesthetics and culture in general. In a sense, this refers us to the geographical determinism.

Monochrome With a Symbol

There are eleven states in Asia using this kind of flag. They can be divided into several groups but let’s do that in other articles. Flags of Bangladesh and Japan symbolize the Sun that illuminates the darkness of the world and the South Korean flag represents the “yin” and “yang” energies. Cyprian flag reflects the silhouette of the country’s island and on the Saudi Arabia flag there is a shahada which reads: “There is no god but Allah, Muhammad is the messenger of Allah.” The sword on the flag symbolizes the victory of the founder of the country — Abdulaziz Ibn Saud.

Possible reasons for the use of red in this group are as follows: China, Vietnam and Hong Kong use this color as a symbol of the Communist Party of their countries. Turkey has red since the Ottoman Empire and red in Kyrgyzstan’s flag stands for courage and valor. 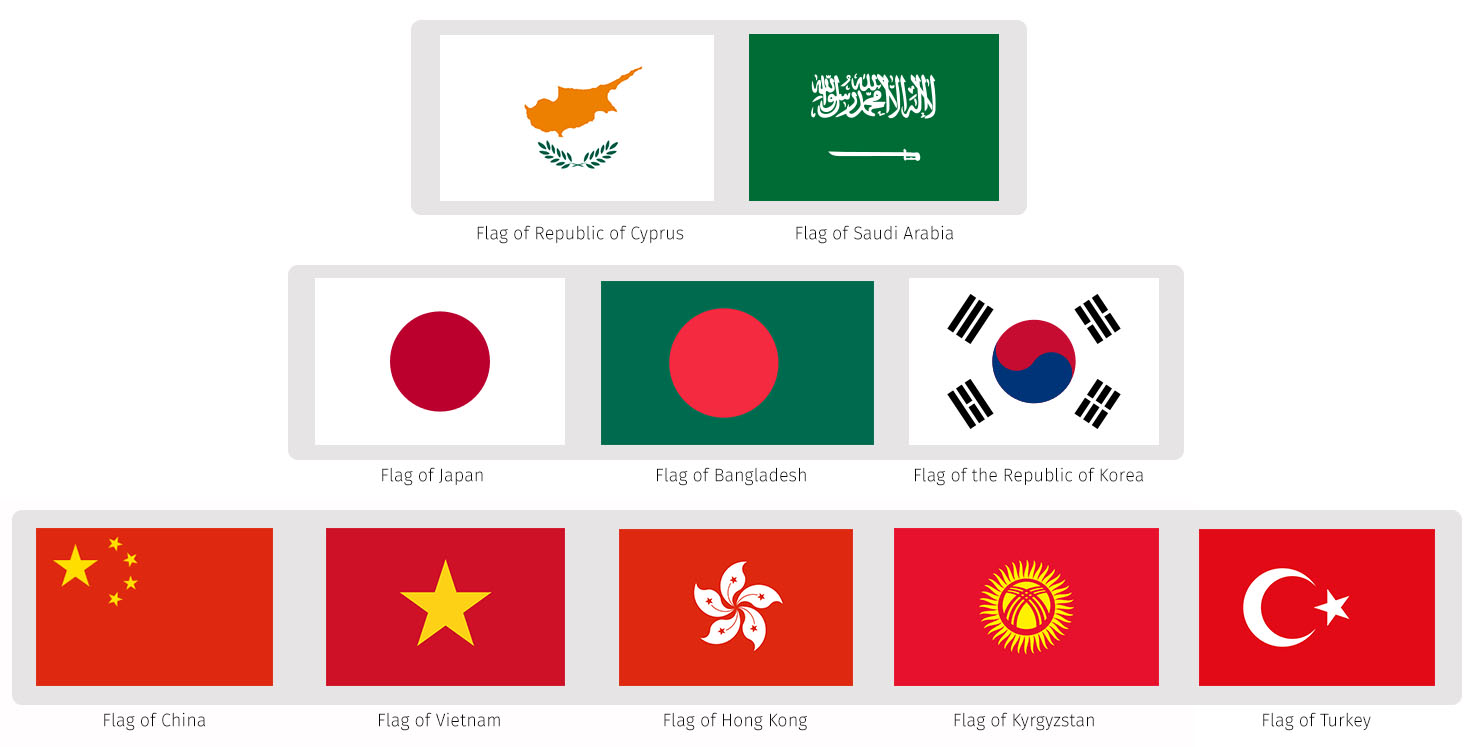 There are fifteen tricolors of this type in Asia, but, as we have put Russia in the pan-Slavic group therefore the Russian flag will not be included in this list. Flags of the pan-Arab group are present in this segment: Syria, Yemen, Iraq and also flags with celestial bodies as a symbol of unity, clear sky or Islam: Myanmar, Uzbekistan and Azerbaijan respectively.

Another subgroup that uses a symbol in the center of the canvas: Iran — four crescent and a sword, India uses wheel — a religious symbol, Tajikistan has a crown with a semicircle of seven stars symbolizing the seven historical and cultural regions of Tajikistan. Three flags left: Lebanon has a cedar on the flag which symbolizes Christianity or immortality, Cambodia’s flag has the famous temple Angkor Wat in the center of it. The flag of Laos has a full Moon in the white color. 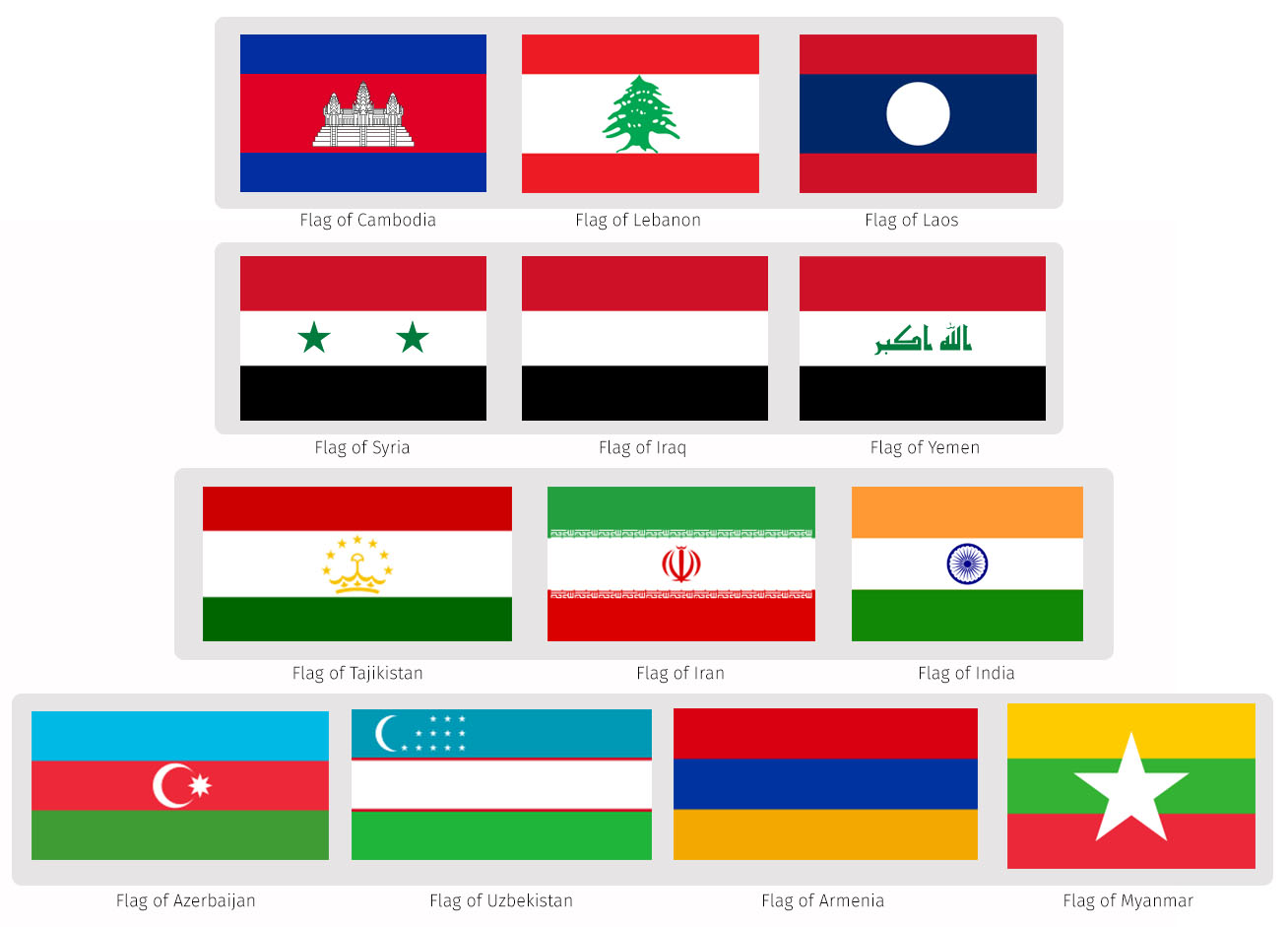 Vertical Bar at the Flagpole

We will put flags which have a pattern at the flagpole: Kazakhstan, Turkmenistan, Bahrain, Qatar as well as flags with stripe at the flagpole: Pakistan and Sri Lanka. The flag of Sri Lanka depicts a lion — the progenitor of Ceylonese. Flag of Bahrain shows five triangles — the five pillars of Islam and the Qatari flag has nine triangles — the country is the ninth member of the “reconciliation of emirates”. Flags of Kazakhstan and Turkmenistan use national ornaments and the Pakistani flag symbolizes the Muslim (green) and non-Muslim (white) population. 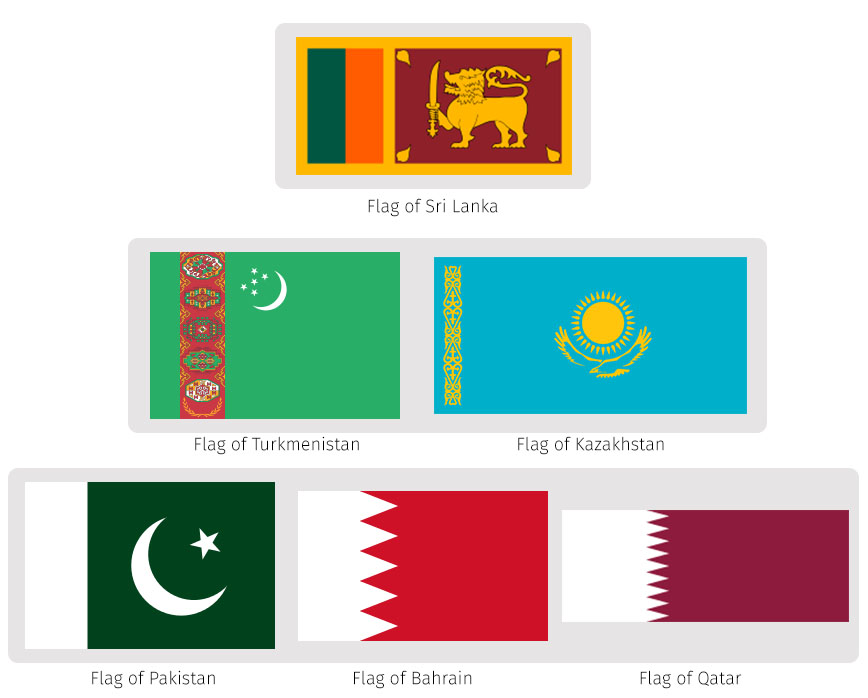 Flags with a vertical bar at the flagpole

The flag of Thailand is made of three colors symbolizing the nation (red), religion (white) and the royal color of Rama VI (blue). The horizontal symmetry of the flag is because the king Vajiravudh (Rama VI) saw the flag upside-down and so that this could not happen again he created a symmetrical flag. Flag of Israel shows an ancient symbol — the Star of David and the North Korean flag is full of communist symbols.

This type of tricolors stands out due to its colors: red, white, black and green. Note that these colors are being used in one of the previous groups (Syria, Yemen and Iraq). This tells us that the zoning or segmenting of flags can also be done using colors but we will do that in future articles.

This group will include Arab countries: Oman, Jordan, Palestine, Kuwait and the United Arab Emirates. Flag of Oman uses the symbol of its country — two crossed sabers overlaid with a traditional dagger. The star on the flag of Jordan symbolizes the first sura of the Koran and also the unity of the Arab clans. The colors of the flags of this group traditionally represent a certain Arab dynasty or era.

There are a few vertical tricolors in Asia. Only two flags are in this group: flag of Afghanistan and Mongolia. The first has a mosque with a shahada, the second has a state symbol “Soyombo” in yellow.

There are also just two horizontal bicolors. Flag of Indonesia is very similar to Monaco’s flag and that was mentioned in the previous article. Crescent on the Singapore’s flag symbolize a young and a growing nation and five stars — the ideals of this country: democracy, peace, progress, justice and equality.

This group includes the Bhutan and Brunei flags. The Bhutan flag refers to the Tibetan name of Bhutan — the Land of the Dragon, which holds in his claws precious stones symbolizing wealth. The yellow part represents a theocratic monarchy and orange the Buddhist religion. The flag of Brunei has two phrases: “Always render service with God’s guidance” and “Brunei, the Abode of Peace”.

Flags with the diagonal division

This group includes a monochrome flag of East Timor with two triangles superimposed on each other and the flag of Philippines which use two colors in addition to the separating triangle. The star on the flag of Timor symbolizes a guiding light and the white color of the star means peace. The golden Sun with eight rays on the Philippines flag represent the eight provinces that first rose up to fight against Spain. The stars represent the three island groups that make up the Philippines.

Flags that have a dividing triangle

The amazing flag of Nepal can be highlighted in this group which is widely known for its non-standard form, although it is often represented on the background of white canvas to match the standard (despite the fact that flags of the world have different proportions and there is virtually no standard). The Sun and the Moon on the Nepal’s flag are a hope for a long existence of the state comparable to the lifetimes of these celestial bodies.

The green color in the Maldives flag symbolizes a lot of palm trees, red is historically adopted and the crescent represents the state religion — Islam. Malaysian flag uses a canton and therefore it could be attributed to the flags that use square as in the past segmentation. The flag is called the “Stripes of Glory” in the country. Rays mean the thirteen states of Malaysia and the crescent represents Islam which is the state religion. Flag of Georgia has five crosses: four small crosses are a general Christian symbol that symbolizes Jesus Christ the Savior and the four evangelists. 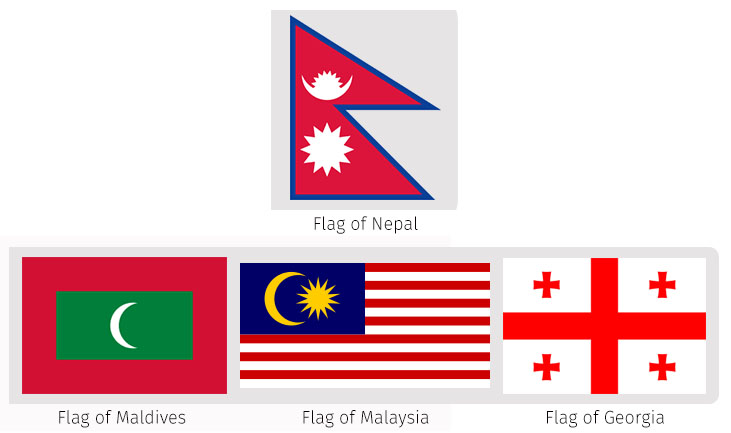 It is time to put everything together: 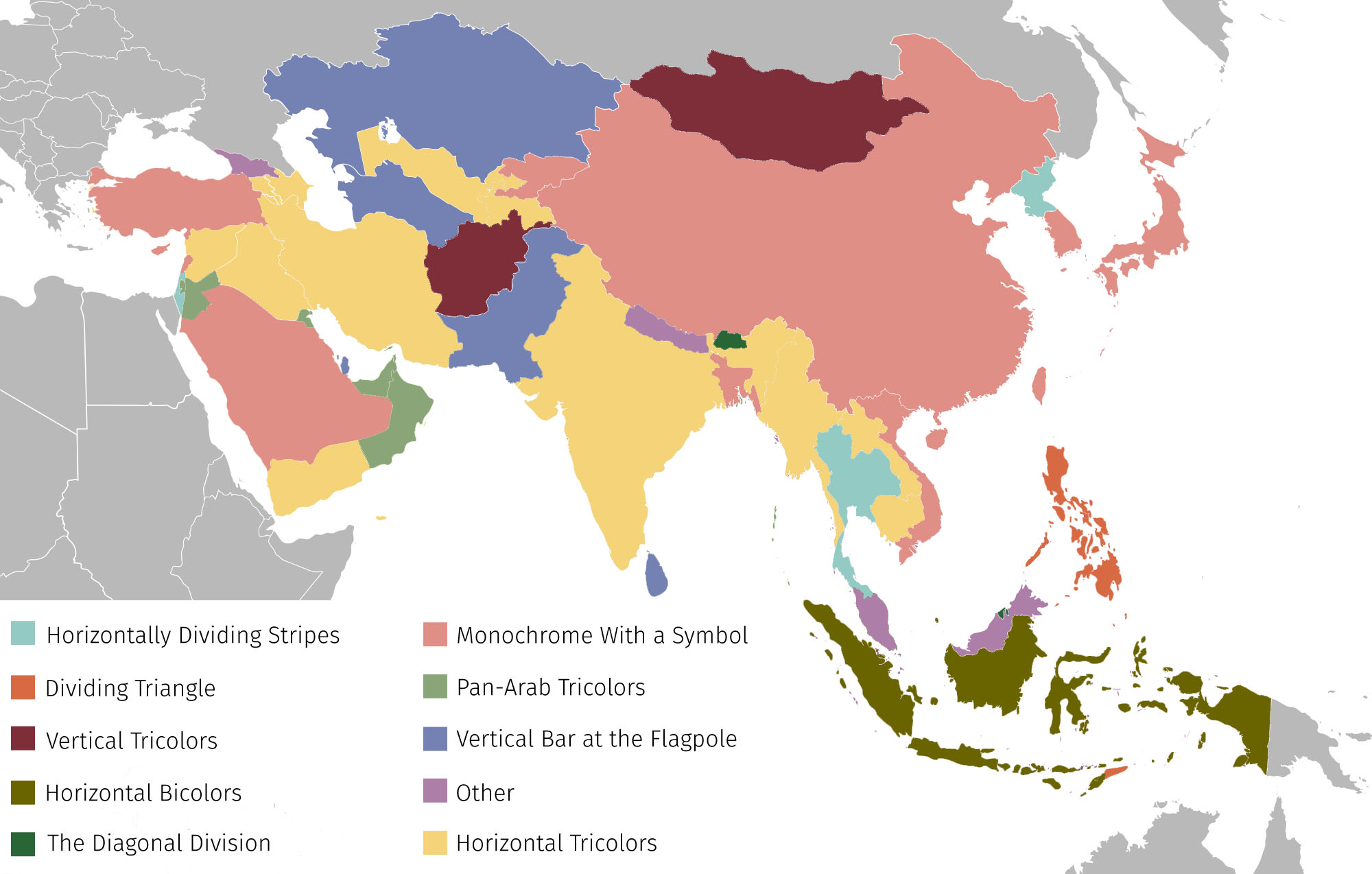 As can be seen the decoration of Asian flags is very diverse, but certain trends are clearly seen in symbolism: the use of national patterns for Central Asia, the symbol of Sun in East Asia and celestial symbols for the whole north of Asia. Monochome flags with a certain symbol and horizontal tricolors are also widespread. As always, island states use a unique design for their flags and the mountainous country of Nepal stands out not only with the highest mountain in the world but also with an amazing non-standard flag.

It is worth noting the high degree of symbolism, religion and politics in Asian flags. And if the allocation of state religion in the flag corresponds to international principles, seeing a flag which symbolizes a dominant party is problematic even in the whole world. Asia is not only the largest part of the world but also a rich in its cultural heritage region.